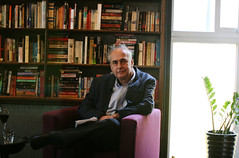 The origins of COVID-19 are rather murky, as Jasper Becker argues in “Made in China.” We need an independent inquiry COVID-19 that also examines America’s cooperation with China on coronaviruses.
The world deserves to know the origin of COVID-19, a virus that has killed more than five million people, caused immense human suffering, and has brought the world economy to its knees. But two years after the first cases appeared, we still don’t know the origin.

Indeed, following President Joe Biden’s request earlier this year of America’s intelligence agencies to look again at this question, the multiple agencies involved could not agree on whether the pandemic likely began because of a laboratory leak, or because of human contact with an infected animal.

However, some investigative reporters like Sharri Markson and Jasper Becker are now arguing that there is very strong circumstantial evidence to suggest that COVID-19 came from a “lab-leak” from the Wuhan Institute of Virology (WIV). In his recent book, Made in China: Wuhan, COVID and the Quest for Biotech Supremacy, Becker poses the rhetorical question, “can it really just be pure coincidence that a new coronavirus very close to SARS but specially adapted to infecting humans has appeared in such close proximity to the only laboratory in the world that specialised in investigating and experimenting with the SARS virus?”

Becker offers a host of historical and contextual information to help us understand China and the world of viruses, and points to the likely origin of COVID-19. Becker argues that most plagues over the past 1500 years have originated in China. In the delta regions of southern China, people have a long history of living cheek by jowl, as they practice intensive rice farming. They also live in close proximity to animals like chickens, ducks, and pigs, which were domesticated in China 8000 to 9,000 years ago, thereby facilitating zoonotic transmission of diseases between animals and humans.

One consequence of the bubonic plague from the late 19th century was a military fascination with germ warfare. China became a victim of bioweapons during the Second Sino-Japanese War (1937–1945) and World War II. Becker writes that American intelligence believes that China has long had a secretive biological warfare programme, in contravention of its international treaty obligations, and that the WIV is a part of it. The WIV could be a dual use facility, carrying out both civilian and military research. Becker argues that there may be a certain reluctance in the international scientific community to recognise this, given the many ties with Chinese students, universities, and companies.

With China’s reform and opening period from 1978, technological advancement has been a top priority, notably for biotechnology and pharmaceuticals. Recent plans like “Made in China 2025” include ambitions for international dominance of biotechnology, with Wuhan being chosen as the national centre. Becker argues that China adopted lax regulations to allow Chinese scientists to undertake risky experiments, like “gain-of-function” research, to enable China to steal a march on rivals.

Becker details the very close linkages that have developed between China and America and other Western countries. Some Chinese study biotech in the US or work in the US as researchers, and then return home to work in Chinese companies. Some of them have allegedly undertaken intellectual property theft for Chinese interests. China has invested in Western biotech companies in order to acquire technology. When risky gain-of-function was suspended during the Obama administration, American researchers transferred their research to China to take advantage of its looser regulation.

A key element of Becker’s narrative is the intensification of US and China research cooperation after the SARS virus (2002-2004). Some believed that SARS came from bats, and so the US funded the study of coronaviruses in bats at the WIV, with much government money being channelled through the nonprofit organisation Ecohealth Alliance under the leadership of Peter Daszak. The bat viruses were sourced from caves in Yunnan, hundreds of miles away from Wuhan.

A high security lab, “biosafety level-4,” was built in Wuhan in a partnership with the French. But in anticipation that there might be troubles to come, the French were essentially kicked out once the lab was completed, and the envisaged research partnership was not realised. The French left Wuhan with many unanswered questions, notably concerning the possible role of the Chinese military at WIV.

There was evidence of COVID-19 dating back to possibly September 2019. When the Chinese government officially recognised the reality of COVID-19 in early 2020, it claimed it was transmitted from bats to humans, possibly via pangolin, at the Wuhan wet market. But in reality, there were no bats at the wet market. The Chinese then shifted their position, arguing that COVID-19 was imported into China, such as through frozen food, writes Becker.

In early 2020, the possibility was suggested that COVID-19 may have come from a lab leak from the WIV. It is well known that the WIV was conducting experiments on coronaviruses in bats, and that the WIV suffered from low standard lab practices and insufficient qualified personnel. Even the best of labs in the West suffer from lab leaks due to human error.

President Donald Trump and his secretary of state, Mike Pompeo, were actively promoting the proposition of a lab leak. Partisan anti-Trump sentiments resulted in this proposition being widely discredited and treated as a conspiracy theory. Many with a vested interest in the research of the WIV, like Peter Daszak of the Ecohealth Alliance, lobbied against the proposition of a lab leak. Scientists on both Chinese and Western sides are very tight-lipped about COVID-19, according to Becker. They fear that their comments could lead to governments bringing an end to this promising field of research.

But the circumstantial evidence in support of a lab leak has only accumulated, such as reports of WIV scientists falling ill with COVID-19 symptoms, a communication shutdown at WIV, the Chinese military taking over WIV, and WIV’s database of bat viruses being removed from the web. The Chinese government has taken great efforts to deny responsibility by destroying evidence, silencing scientists, whistle-blowers, and citizen-journalists, refusing access to the WIV, and its economic coercion of Australia for calling for an independent inquiry into the origin of COVID-19.

Becker concludes that COVID-19 is ultimately the evidence of the ethical bankruptcy of the Chinese political system. China will never allow an independent, international enquiry into the origins of COVID-19. It fears for the survival of its regime. China also fears that it could be sued, and its US investments could be expropriated for damages.

It would also be very important to have a thorough inquiry into the cooperation between Western governments and the WIV and China’s biotech research. Such an inquiry should lay new ground rules for cooperation between China and the West in the biotech area and other related scientific research. Unfortunately, there does not seem to be an appetite for such an inquiry.

- Jasper Becker. Made in China: Wuhan, Covid and the Quest for Biotech Supremacy