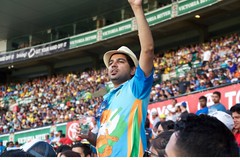 Australia is doing its best to strengthen economic and political relations with India. But will India be the solution to its economic and political challenges?
As Australia’s relations with China, its leading trading partner, have deteriorated in recent years, there has been a growing chorus calling for Australian exporters to reduce their high dependence on China by diversifying to other markets, and for the Australian government to strengthen partnerships with other middle powers, most notably India, Asia’s other behemoth.

Australian special trade envoy and former Prime Minister Tony Abbott recently wrote the “answer to almost every question about China is India.” India has, after all, the world’s third biggest economy in purchasing power parity terms, after China and the US, even though its total GDP is less than 40% that of China.

Australia and India have solid foundations to work on in developing a stronger partnership. Geopolitical analysts have long pointed to “curry, cricket and Commonwealth” as historical and cultural bonds between the two countries. And in an Indo-Pacific riddled with authoritarian and military regimes, Australia and India stand out as mature democracies, even if there has been some deterioration of India’s democratic credentials under Prime Minister Narendra Modi.

India’s strongest connection with Australia is a human one. By 2020, there were over 720,000 people of Indian birth living in Australia, making Indians the second largest foreign-born group in Australia, after the English and well ahead of the Chinese. Moreover, Indians represent the largest number of skilled migrants in Australia, thanks to their command over the English language, and science and technology capabilities. In 2019, Australia’s large cohort of international students included 116,000 Indians, with India being Australia’s second most important source of students. Separately, Hinduism is Australia’s fastest growing religion and Punjabi the fastest growing language.

But as the Australian government strictly limited the number of Australians allowed to return home during COVID-19, due to limited quarantine capacity, nearly 11,000 Australian citizens and permanent residents were stranded in India, while India was being ravaged by the Delta variant. This episode provoked outcries of racism.

Indian Australians have been making a mark in Australian life, even though few have risen to positions of political power. Some notable Indian Australians include: Anupam Sharma, film maker, Australia Day Ambassador, and film entrepreneur; Aravind Adiga, novelist and winner of the 2008 Man Booker Prize; Lisa Sthalekar, former captain of the Australian women’s cricket team; Peter Varghese, former High Commissioner to India, and current chancellor of the University of Queensland; and Dave Sharma, former ambassador and currently member of parliament.

At the political level, there has been a strengthening of relations between Australia and India, especially since China provoked a bloody skirmish with India in the bordering Galwan Valley in 2020.

In 2020, Prime Ministers Scott Morrison and Narendra Modi elevated the countries’ relationship to a Comprehensive Strategic Partnership (CSP). As part of the CSP, Australian and Indian foreign and defence ministers decided to meet to discuss strategic issues in a ‘2+2’ format at least every two years, with the inaugural meeting taking place in September 2021. Agreements were signed on mutual logistics support and collaboration between defence, science and technology research organisations in both countries.

In 2020-21, Australia joined key regional defence partners India, Japan and the US for Exercise MALABAR. Despite its importance for fostering an open, inclusive and resilient Indo-Pacific, military interoperability with India will always be limited as it sources much of its military hardware from Russia, and also as it clings doggedly to its traditional strategic autonomy.

The CSP builds on the 2018 decision to adopt an “India Economic Strategy to 2035”. In doing so, the Australian government believed that India offers more opportunity for Australian business over the next 20 years than any other single market. It will focus on greater economic engagement targeting 10 Indian states and 10 key sectors, while providing practical support for Australian businesses entering or expanding operations in India.

Australia and India also come together with the US and Japan in the Quadrilateral Security Dialogue (the Quad”), a minilateral initiative of democratic countries that seeks to balance and counter China’s assertive behaviour and protect the rules-based regional order. Another such initiative is the India-France-Australia Trilateral Ministerial Dialogue which seeks to promote the rules-based maritime order focusing on the Indian Ocean.

For all the great hopes of India becoming a key factor for Australia’s economic diversification, results on the board are much less promising. For a country of such size and potential, India is only a modest trading partner for Australia, ranking 8th in 2019-20, behind China, the US and Japan, but also behind Singapore and New Zealand.  About three-quarters of Australia’s merchandise exports to India are coal, a commodity whose future is bleak if countries become more ambitious in tackling climate change.  Seen from India’s perspective, Australia is also not an important trading partner.  Australia is only India’s 30th most important export destination, and 14th most important source of imports.

In this context, Australia’s trading relationship with India is quite the opposite of that with China. Australia and China are natural trading partners in that resource-poor China needs access to Australia’s natural resources like iron ore, coal and natural gas, while Australia’s consumers have a healthy appetite for Chinese manufactured products like electronics, clothing and footwear, toys and all sorts of household products. By contrast, India does not have a strong manufacturing sector, and has less need for Australia’s natural resources.

Further, India is a challenging trading partner, with a long protectionist tradition, another factor inhibiting its trade with Australia. For example, Australia is a member of the Regional Comprehensive Economic Partnership (RCEP), a free trade agreement among 15 Asia-Pacific nations that accounts for about 30% of the world’s population and of global GDP, making it the biggest trade bloc in history. While India was a party to the very long negotiations, it withdrew before the deal was signed in November 2020.

In a similar vein, Australia and India began negotiations for a Comprehensive Economic Cooperation Agreement (CECA) in May 2011. But after nine rounds of negotiations, both countries decided to suspend negotiations in September 2015. India is particularly concerned by freer trade in Australian farm exports, while New Delhi’s demands for less restrictive visas for Indian workers have been a major sticking point for Australia.

In October 2021, both countries formally launched the resumption of negotiations on the CECA. Both India and Australia reaffirmed their commitment to conclude a CECA, including to reach an “early harvest” agreement by December 2021 to liberalise and deepen bilateral trade in goods and services, and to conclude the negotiations on a full CECA by the end of 2022. Former Australian Prime Minister Tony Abbott said a free trade agreement between his nation and India would signal the “democratic world’s tilt away from China”.

But as Peter Varghese, architect of Australia’s India Economic Strategy, said, “India needs to be understood in its own terms. It will always march to its own tune. It is the only country with the scale to match China but it will not be the next China. Indeed, comparisons with China only get in the way of understanding the singularity of the Indian economy and the nature of the opportunities in the Indian market.”

Not the solution to all issues

The strategic partnership between Australia and India is developing solidly. It will be important for both countries as they search for geopolitical balance against China and a broad range of middle power partnerships to hedge against the risk of future political instability in the US.

This article by John West was first published by Unravel on 9 November 2021.