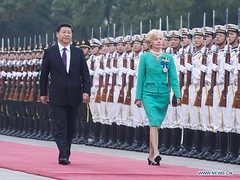 Within the space of just a few years, Australia's strategic partnership with China has disintegrated, and there is little hope it can be salvaged in the near future.

In keeping with China’s extraordinary rise as an economic and military power, it has also become the major trading partner of over 120 countries. But there are few countries more dependent on Chinese business than Australia.

In recent years, one-third of Australia’s exports have been destined to China, while in early last year that figure rose to almost half.

This isn’t surprising, for Australia and China have strong complementarities. China’s rapid urbanisation and industrialisation have driven demand for iron ore, coal and other minerals, which Australia has in abundance. Rising Chinese incomes have powered Australian exports of barley, wheat, beef, dairy products and wine.

And China’s emerging middle class has been behind the extraordinary growth of Chinese students and tourists choosing Australia as their favoured destination. The export of education services, with China by far the leading customer, has been Australia’s third-most important export, after iron ore and coal, in recent years. Australia has been somewhat unique in that it has had a trade surplus with China in recent years, in sharp contrast to the US’s long running trade deficit.

With this blossoming economic partnership, everything seemed rosy between China and Australia. Until recently. When President Xi Jinping visited Australia in 2014, he said there was an “ocean of goodwill” between the two countries. At the same time, the Australian prime minister and Chinese president agreed to describe the relationship as a “comprehensive strategic partnership”, while the China–Australia Free Trade Agreement entered into force on 20 December 2015.

Since then, however, China-Australia relations have progressively deteriorated and fallen to their lowest ebb since diplomatic relations were established almost half a century ago. Many Australian exports are now subject to sanctions or tariffs, two Australian citizens are subjects of hostage diplomacy, and there are no longer any Australian journalists in China, after the last two were unceremoniously booted out last year. High level contacts are also frozen, with Chinese ministers refusing to take phone calls from Canberra.

How could relations between two natural partners crumble so quickly? What have been the major events along the way?

Following many reports of Chinese interference in Australian politics and society, Australia introduced anti-foreign interference legislation, which displeased China. This was launched in December 2017 by then prime minister Malcolm Turnbull in a speech in which he announced that “The Australian people have stood up”, mimicking apocryphal accounts of Mao Zedong’s speech on the founding of the People’s Republic of China.

Relations with China were further inflamed when in August 2018 the Australian government banned China’s tech giant Huawei from taking part in its 5G network due to security concerns. Australia then antagonised China further by lobbying the other Five Eyes nations to follow suit.

Australia-China tensions reached a crescendo in April 2020 with the Australian government’s call for an independent, international enquiry into the origins of COVID-19, and Prime Minister Morrison’s proposal that World Health Organization officials be granted similar powers to those of United Nations’ weapons inspectors.

The Australian government added fuel to the fire when it concluded a reciprocal defence pact with Japan, and also when it used a new foreign relations bill to tear up two agreements between China and the state government of Victoria for China’s Belt and Road Initiative.

In November 2020, the Chinese government brought matters to a head when the Chinese embassy handed a list of 14 grievances to an Australian journalist. These grievances include: blocking Chinese foreign investment, banning Huawei from the 5G network, foreign interference legislation, calling for an enquiry into COVID-19, interference in Taiwan, Hong Kong and Xinjiang, and so on. In handing over the list of grievances, a Chinese government official said “China is angry. If you make China the enemy, China will be the enemy.” This list of grievances is widely considered to be just clumsy diplomacy, that no self-respecting country would ever consider caving in to.

During the good old days, there was much debate about the apparent incoherence in Australia having China as its leading economic partner, but maintaining the US—China’s strategic rival—as its major security partner (notably through the ANZUS treaty). The political mantra at the time was that Australia does not need to choose between the US and China, and that Australia could maintain both partnerships. But clearly Australia has now chosen, and is paying an economic price.

How did we get here?

One school of thought, maintained by former Australian prime ministers Kevin Rudd and Malcolm Turnbull, is that under President Xi, China has changed, and that Australia is merely reacting to this. Internal repression and controls have been ramped up. Human rights abuses have worsened, notably in Xinjiang. Economic policy has also shifted left, with state-owned enterprises playing a more dominant role, and the government cracking down on the private sector, notably in the technology sector.

China has also become more assertive, from its intervention in Hong Kong, its harassment of Taiwan and Japan, its occupation and militarisation of the South China Sea, and interference in Australia and many countries.

Moreover, its coverup and lack of transparency regarding the origins of COVID-19 is inexcusable, as is its subsequent Wolf Warrior diplomacy. In short, Australia has had no choice but to defend its sovereignty and stand up for its national interests and values, they say. At the same time, both Rudd and Turnbull also agree that the current Australian government has added fuel to the fire through bellicose statements like the “drums of war are beating”.

Sydney University’s David Brophy has recently made an alternative argument. According to Brophy, Donald Trump’s “America first” nationalism sent shockwaves through the US alliance network, seeming to presage a turn away from US commitments to Asia. So Australia’s security establishment felt a need to send signals to the US on the importance of confronting China, to cajole it into remaining active in the Indo-Pacific.  It’s a case of being “more Catholic than the Pope”, to ensure that the Pope does not lose the faith. This is the reason for the hardening of Australia’s stance against China – it was not a response to China’s more authoritarian turn under President Xi.

In other words, Australia has explicitly made its choice. Australia’s national security and business elites are very keen to maintain the status quo of American hegemony in Asia. “The American presence in Asia is more important for Australia than it is for America,” writes Brophy. Brophy questions the current approach taken by the Australian government, as he writes: “I see as dangerous any efforts to uphold a flagging American hegemony in Asia, which is now of an almost exclusively military nature. I worry at the visible rise in anti-Chinese racism we see here. And I worry at the worsening levels of state repression in China.”

In reality, there are elements of truth in the arguments of both Rudd and Turnbull, and Brophy.


The impact of deteriorating ties

It is still too early to know the full impact of plummeting ties. But the direct economic impacts of trade sanctions on Australia has been relatively modest to date, as most exporters have been able to sell their products to other markets. We will have to await the end of COVID-19 to know the impact on international student and tourist arrivals. In any event, all Australian exporters have learnt the risks of overdependence on one market and the diversification imperative will guide exporters in the future.

On the other hand, there are reports that Beijing’s ban on Australian exports is ironically hurting the Chinese economy. Moreover, China has suffered enormous reputational damage in the eyes of the international community, in addition to the damage done by its coverup and poor management of COVID-19. And Australia has shown to the international community that even middle powers should not be afraid to stand their ground against China.

While Australia has made a clear choice of siding with the US, there is much debate about the wisdom of this choice. In particular, there are many questions about America’s reliability as an ally, something that has only been heightened by its disastrous withdrawal from Afghanistan. But such concerns have not stopped Australia entering into a landmark security pact (AUKUS) in recent days with the US and the UK, which will support Australia in acquiring nuclear-powered submarines, as well as strengthen cooperation in the Indo-Pacific which is being shaken by the rise of China.

Looking ahead, the future of the Australia-China relationship will depend on wise and clever leadership and management, attributes that are frequently in short supply on both sides.

This article by John West was first published by Unravel on 21 September 2021.