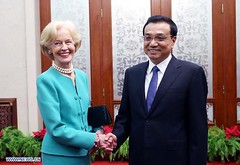 David Brophy’s new book, China Panic, offers a nuanced and insightful analysis of the deterioration of Australia’s relations with China.
Relations between China and Australia have fallen to their lowest ebb since diplomatic relations were established almost half a century ago. Many Australian exports are now subject to sanctions or tariffs, two Australian citizens are subjects of hostage diplomacy, and there are no longer any Australian journalists in China. This troubling development has inspired a plethora of books by Australian writers, but perhaps the most original and thoughtful to date is David Brophy’s China Panic: Australia’s Alternative to Paranoia and Pandering.

According to Brophy, a senior lecturer in modern Chinese history at the University of Sydney, Australia’s China panic began with Malcolm Turnbull’s “The Australian People Have Stood Up” speech in late 2017. It then reached a crescendo with Scott Morrison’s 2020 call for an independent, international enquiry into the origins of COVID-19, and for World Health Organization officials to be granted powers similar to those of United Nations’ weapons inspectors.

How can we understand Australia’s apparent confrontational turn towards China? After all, when Chinese President Xi Jinping visited Australia in 2014, he said there was an “ocean of goodwill” between the two countries, while the China–Australia Free Trade Agreement entered into force on 20 December 2015.

Brophy argues that Donald Trump’s “America first” nationalism sent shockwaves through the US alliance network, seeming to presage a turn away from US commitments to Asia. In response, Australia’s security establishment felt a need to send signals to the US on the importance of confronting China, to cajole it into remaining active in the Indo-Pacific. He argues this is the reason for the hardening of Australia’s stance against China, rather than it being a response to China’s more authoritarian turn under President Xi Jinping.

Commentators who argue that Australia needs to adopt an “independent foreign policy” have got it wrong. To quote Allan Gyngell, Australia suffers from a “fear of abandonment.” Thus, Australia’s national security and business elites are very keen to maintain the status quo of American hegemony in Asia. “The American presence in Asia is more important for Australia than it is for America,” writes Brophy.

Brophy questions the current approach undertaken by the Australian government, as he writes: “I see as dangerous any efforts to uphold a flagging American hegemony in Asia, which is now of an almost exclusively military nature. I worry at the visible rise in anti-Chinese racism we see here. And I worry at the worsening levels of state repression in China.”

He questions the value of the ANZUS alliance, which has led Australia into America’s many military adventures and has resulted in alleged war crimes. Australia’s new confrontation with China is also inflicting economic pain on Australian exporters. It has also fostered anti-Chinese racism, which has only accelerated with the arrival of COVID-19. Brophy finds it curious that both the right and left sides of Australian politics are aligned in their concerns about China.

While Brophy may be critical of Australia and the US, he is also very critical of China, with chapters on the battle for democracy in Hong Kong and the mass incarceration of Uyghurs in Xinjiang, the latter being a topic on which Brophy has published widely. At the same time, Brophy notes that the West’s interest in human rights is selective, with little or no criticism of India’s repression of Muslims in Kashmir.

Brophy quotes the chief of ASIO as saying in 2019 that China was employing “insidious” tactics to “take over” Australia’s political system, and the secretary of the Department of Foreign Affairs and Trade claiming in September last year that “the institutions we take for granted — our parliament, our democracy, our legal system, our freedom of speech and association — they are really at stake now.”

But Brophy argues that there is a greater threat to Australia’s sovereignty from its military alliance with the US, which has seven “joint facilities” in Australia, including Pine Gap and North West Cape — “in the event of a conflict with China, America’s fleet of nuclear submarines will receive targeting and firing instructions from the North West Cape.”  Brophy also reminds us that while white elites worry about Australia’s sovereignty, indigenous sovereignty was never ceded to white settlers.

One of the most fascinating chapters in this book is “Cold-War Campus” where Brophy examines Australia’s China panic in the university sector. “In 2019, before the COVID-19 pandemic hit, higher education brought in some A$12 billion in export revenue, most of it from China … With more than 150,000 Chinese international students enrolled.” Brophy notes that there are Confucius Institutes established at thirteen universities, and that there is a proliferation of partnerships and MOUs with Chinese universities.

Brophy quotes Liberal MP Andrew Hastie’s claim that universities are “modern battlegrounds of covert influence and interference,” and ASPI’s Alex Joske who spoke of China’s “military-academic onslaught.” But he argues that such concerns are exaggerated, and that problems, such as they exist, derive from the virtual privatisation of universities. He deplores the inexorable decline in public funding of universities which is eroding university autonomy and academic freedom, and calls for the university community — the staff and students — to reassert themselves as the voice of the institution.

China Panic offers an insightful antidote to the sometimes hysterical analysis and commentary emanating from Australian politicians of all stripes, intelligence agencies, the media, think tanks, journalists, and commentators. His analysis is refreshing in that he reserves criticisms for not only China, but also for Australia and the US. His idealism shines through when he argues that human wellbeing, not economic or security priorities, should be put at the centre of foreign policy.

Brophy’s book may not propose a clear strategy for re-establishing a modus vivendi for Australia’s relations with China, but it offers many nuanced ideas and perspectives that merit consideration.

This book review by John West was first published by the Australian Outlook on 11 September 2021.