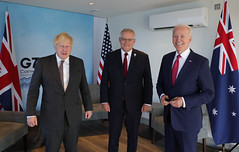 On the occasion of the 70th anniversary of the ANZUS treaty, Glen Robinson shares his analysis of this instrument.
This week marks the 70th anniversary of the Anzus Treaty, and our leaders are really going out of their way to celebrate it.  An appropriate celebration would be to reflect on the objectives and also reflect on how effectively it has functioned in the intervening 70 years.

So, looking at the document, and apart for the flowery words, the only clauses of substance read as follows

The Parties will consult together whenever in the opinion of any of them territorial integrity, political independence, or security of any of the Parties is threatened in the Pacific

Article 3 is generally taken to mean that we will only enter the dispute if we agree to do so, otherwise each Party goes it alone on the matter.

So let us review some of the matters.  Remember, that it is a Treaty in which there are only 3 Parties, and in 1984 New Zealand enacted a policy that NZ was now a nuclear free zone, and that nuclear powered vessels and artillery were not welcome in their waters.  The USA tried desperately to get them to change their mind, but to no avail, and in 1986 the USA declared that NZ was no longer a part of the ANZUS Treaty, and they were cut free.  Interestingly, the NZ people just got on with the job, established significantly increased commercial linkages, established additional diplomatic contacts, and there were no negative nor retaliatory actions taken against them.

It is interesting that the fact that this is now a cozy twosome is very rarely mentioned or recognised publicly in Australia.

There has been only one occasion when the Parties were expected to come to the aid of another.  In 1999, Timor Leste conducted a referendum to establish its independence from Indonesia.  It was a very critical time and Australia was sending military forces to keep the peace and protect the Indonesian authorities.  Australia invited the USA to join in and they declined.  That is the only time in which the USA were invited to join Australia in a conflict situation.

However, during the 70 years of the Treaty, the USA has been directly involved in 50 altercations and it is understood that Australia participated in many of these, presumably at the invitation of the USA. It is interesting that none of those 50 countries were regarded as being militarily competent or advanced, but even so, they were attacked by the USA military

At the present time, the USA has 800 military bases in 50 countries with between 150,000 to 200,000 of its active-duty personnel stationed outside the USA.  Interestingly, China, the country which causes considerable angst in Australia, has only 1 overseas base and that is in Djibouti, on the Horn of Africa.

There is considerable conjecture on the safety and security provided by the Anzus Treaty.  There are those who understand the intent of the treaty, but do point out that the fact that Australia is so close to USA that it in itself does pose a risk, and then there are those which adamantly say that there is a risk which is significantly diminished because of the USA “protection “of Aus.  The 3rd group point to NZ and the freedom and security which they enjoy without the need to establish a security partner, and that is used to diminish the need for the Treaty.

From a political perspective, the Treaty provides a mechanism through which Australia can claim a special closeness to the USA, and to many people that is sufficient security to satisfy them.

Glen Robinson is a co-founder and director of Asean Focus Group with Peter Church which was formed in 1990 to provide advice and assistance to those organisations which wished to take a commercial presence primarily in ASEAN, but also other Asian countries.   Several years ago, the company entered a joint venture with Venture Group, and both now trade as AFG Venture Group.