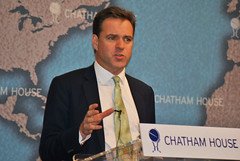 COVID-19 is neither the first or last pandemic the world has known, and there are many insights from history.
Public historian and conservative columnist, Niall Ferguson, makes an intriguing contribution to our understanding of COVID-19 through his recent book, “Doom; The Politics of Catastrophe”, which attempts to place COVID-19 in a historical perspective.  Ferguson takes us on a rollicking historical journey as he analyses all sorts of disasters -- earthquakes, tsunamis, volcanic eruptions, asteroid strikes, famines, wars, pandemics and more -- dating back to at least the Roman Empire.

As has been well documented, COVID-19 has been a massive disaster for the US, with over 600,000 deaths, and the world, with more than 4 million deaths.  And yet, Ferguson argues that COVID, which has killed only 0.06 percent of the world's population, simply does not compare with the 14th century Plague (“Black Death”), the 6th century Plague of Justinian, which both killed over 30 percent of the world’s population, or a string of other pandemics.  COVID has only just overtaken the 1957-58 Asian flu in terms of mortality, an episode that is now virtually erased from modern memory, and will never catch up to the 1918 Spanish flu, which was some 30 times more fatal.

Ferguson argues however that COVID’s economic costs have been much greater than the public health costs, and that in terms of its fiscal and monetary impact, COVID has been like a World War.  Governments did not launch massive fiscal and monetary splurges following previous pandemics.

Many commentators have been quick to blame the incompetence of populist leaders like Donald Trump, Boris Johnson, Narendra Modi, and Jair Messias Bolsonaro for the global COVID disaster.  But in the case of the US, Ferguson lays great blame on what he sees as the decay of America’s bureaucratic state of the 21st century, which he argues has become less nimble and responsive.  When the Asian flu illness struck the US in 1957, the Eisenhower administration reacted quickly, focussing on getting a vaccine and minimising the disruption to daily life.  Ferguson, the conservative columnist, shines through the text, notably here in his apparent ideological opposition to economic lockdowns to control COVID.

Ferguson highlights the explosion of the space shuttle Challenger in 1986, killing all seven crew members, as a symbol of the decay in the quality of US governance.  While the media rushed to implicate President Reagan, a key role was played by a minor NASA bureaucrat who changed the estimate of the probability of failure from only one in a hundred (the engineers’ estimate) to one in a hundred thousand, in order to keep the programme going and not fall behind schedule.  Government today is focussed more on bureaucratic preparedness, beautifully drafted plans and PowerPoint presentations, rather than actual preparedness.  This is how in just 2019 the US had been ranked the best prepared country to handle a pandemic.  Unfortunately, Ferguson does not explore how politicisation of and funding squeezes on public institutions may have fostered bureaucratic decay.

Ferguson argues that while scientific knowledge has progressed in leaps and bounds in recent centuries, we have made ourselves more vulnerable to contagion by our highly networked society.  The plethora of flights out of Wuhan all over the world is but one example.  And social media has played a particularly nefarious role through these networks as it propagated crazy ideas, fake news, conspiracy theories, something that the Eisenhower administration did not have to contend with in 1957.  So we have had two plagues, COVID and an “infodemic” of misinformation and disinformation.  The role of “network science” is clearly one of Ferguson’s hobby horses and builds on his previous book “The Square and the Tower”.

As we muddle through COVID-19, there is a chorus of voices calling on the world to learn the lessons in order to manage the next pandemic, which is surely just around the corner and could be much worse than COVID.  And then there are other wise voices who argue that COVID-19 could be followed by a new disaster triggered by global warming, the defining issue of our times.

Ferguson argues that one lesson from history is that the next disaster may not be the one that we are expecting.  He believes that the US and China are in the midst of “Cold War 2”, something which has only worsened through COVID,  and that a crisis over Taiwan could be imminent.  Such a conflict would certainly include a cyber war which would potentially disable a great deal of the critical infrastructure that has come to rely on the Internet.

In Ferguson’s view, the US is in much worse shape than it was in Cold War 1, especially due to the decay of its society and federal government competence, and that China is a much more formidable rival than was the USSR.  While Taiwan may be Ferguson’s pick as the most likely next crisis, he wisely believes that developing general agility and resilience is the best way of preparing for future disasters, which are inherently unpredictable, rather than listening to all the Cassandras hawking their pet disaster hypotheses.

Readers looking for deep insights and grand theories of disasters and COVID will be disappointed, despite the book’s vast array of information.  Some of the book's pearls are rather banal, like Ferguson’s argument that there is a false dichotomy between natural and manmade disasters, as all natural disasters have a strong political dimension.  And that the impact COVID on social life might be similar to that of AIDS on sex life.  The book probably suffers from being finalised in August 2020, barely six months into a pandemic which will likely last several years.  That said, COVID will surely be seen as a pivotal moment in modern world history, and Ferguson’s book will likely become a useful member of the emerging COVID literature.