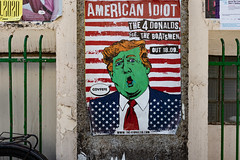 The Plague Year - America In The Time Of COVID

As we all know, the US made a great hash of its management of COVID. Its performance has been one of the worst of all advanced countries with some 36 million cases and over 600,000 deaths. Write explores how this could be possible and some of the lessons?

Wright reminds us that, way back in October 2019, before most anyone had heard of COVID-19, a group of experts from the Nuclear Threat Initiative, Johns Hopkins Center for Health Security and the The Economist Intelligence Unit developed the Global Health Security Index, which ranked some 195 countries in terms of their readiness for a pandemic. The US came in Number 1, the most capable, and the UK Number 2. Obviously, the brilliant experts who conducted this study could not imagine the capacity of these two great nations to bungle pandemic management.

And while the Trump administration seemed hopelessly unprepared for most of the challenges it faced, it was ironically very well prepared for COVID-19. It even conducted its own tabletop exercise ("Crimson Contagion") to examine how the US would respond if it actually faced such a pandemic. It involved various agencies of the federal government, states and territories, public health institutions, hospitals, and so on.

Here is the scenario. A traveller returns from China to Chicago. He has a dry cough. The next day his son goes to a rock concert. Six months later, close to 600,000 Americans are dead. It's creepily prescient, and similar to what has occurred. Insightfully, the tabletop exercise showed how the government would behave, agencies not talking to each other, not knowing who was in charge, states in chaos not knowing where to turn, supply chains disrupted, the national storehouse depleted, businesses struggling with their employees marooned at home, and schools not sure whether they're going to open or close.

Horrendously, all these very things forecast by the Trump administration would come to pass! In other words, no lessons were learned. Trump did get one thing right, however, namely Operation Warp Speed, a public - private partnership to facilitate and accelerate the development, manufacturing, and distribution of COVID-19 vaccines, therapeutics, and diagnostics.

Was COVID-19 transmitted to humans from bats, perhaps via pangolins, as most now assume or did it come from a laboratory? According to Wright, both hypotheses are still plausible. There is no evidence that any infected animals were sold in Wuhan wet markets, and "patient 0" has not yet been found.

While most regard a lab origin for the virus as right wing heresy, Wright argues that lab leaks are far more common than we might imagine. The US Centers for Disease Control and Prevention (CDC) has had a number of lab leaks (Ebola), as have the UK (for smallpox) and China (for SARS1). And Wright regards Chinese behaviour as very worrisome. They failed to disclose certain facts, such as the illness of researchers from the Wuhan lab who were ill enough with COVID-like symptoms in November to require hospitalisation, after doing "gain of function" experiments on coronaviruses.

Wright believes that COVID is so lethal that the US, and indeed all nations, would suffer from it. But the US had at least several chances to put the brakes on the spread of this contagion.

First, in early 2020, the Chinese authorities refused to approve a mission from the CDC to work with its Chinese counterparts to understand what was happening. Had the CDC gone to China, it would have learnt that COVID is not only transmissible between humans, but that most transmission comes from asymptomatic people, something the CDC would only learn in March. COVID is not like the flu, it's more like polio.

Quick and effective testing of COVID could also have helped turn the tide of COVID. But the once-distinguished CDC bungled test development, as the first test was full of false positives. This catastrophe would lose three critical weeks in the battle against COVID. And then there was the politicisation of masks by President Trump, despite all the advice he received on the benefits of masks. He insisted that he was not going to wear a mask. He even visited a mask factory, while not wearing a mask. Wright regards Trump as a "saboteur".

And lastly, the lack of a national plan or leadership had a big impact. Trump told state governors that they were on their own for buying masks, ventilators, personal protective equipment, etc. So governors were forced to compete against each other. And when supplies did arrive, they were sometimes seized by federal authorities, so governors took to hiding the equipment from the feds. It was a total chaotic mess, just as predicted by the Crimson Contagion exercise.

One day, we may look back on COVID-19 through three different lenses, according to Wright.

COVID-19 was a harbinger, deadlier viruses await us. The 21st century has seen numerous viruses -- like Ebola, SARS, MERS, West Nile virus, Zika, and bird flu -- many more dangerous than COVID 19 -- and that is going to continue, as we encroach on nature and climate change forces animals out of their natural habitats. We must be better prepared.

COVID-19 provides an X-ray of our society. COVID shows us all the broken places in our society and governance, notably our health system, and will hopefully foster positive social change.

COVID-19 may also be a gift. Wright cites Gianna Pomata, a retired medical historian from Johns Hopkins University, who argues that the Black Death of the fourteenth century marks the end of the Middle Ages and the beginning of the Renaissance. It encouraged people to open their minds, and led to fresh thinking. "Nothing was the same," after the Black Death, "it's like a wind, fresh air coming in." It was a great time to be an artisan. Labour was scarce, wages went up, and the bourgeoisie, the artisans, and the workers started to have a stronger voice.

And the intellectual overthrow of the medieval medical establishment, which was based on astrology, was caused by doctors who set aside classical texts and turned to empirical evidence. In short, the Black Death was an important change agent, and COVID may push us to think in different ways about our government, science, work, family life and our culture, even if it does not lead to a Renaissance.

And fresh thinking is more necessary than ever. As Wright says: "Imagine a foreign adversary invaded America and killed half a million people. How would the country respond? No doubt the most powerful military in the history of the world would annihilate the invader. Partisan differences would fall away as the American people joined as one to defend their countrymen".

But America's invader was not a human adversary, but a virus. The US was poorly armed, due to decades of cutbacks in its healthcare system and the politicisation of once-great institutions like the CDC. After 9/11, the US spent trillions on homeland security and counterterrorism. It was ready to go to war with any other nation, but it overlooked its weakened, broken society which was easy prey for the contagion that was inevitably going to come.

Wright's narrative finishes with the inauguration of President Joe Biden. Since that time, the US initially saw a dramatic fall in cases of COVID-19, and a sharp increase in vaccination. But more recently, case numbers have been on the rise again -- numbering as much as 160,000 on 19 August. While about 50 percent of Americans are fully vaccinated and 60 percent have had one shot, that leaves a large unvaccinated population who are vulnerable to the virulent Delta variant -- many of whom are ideologically opposed to vaccines. There are also concerns that the effectiveness of vaccines may be quickly waning. In short, while the US should contemplate the longer term implications of COVID-19, the country still has much to do to quell the pandemic in the here and now.

This book review by John West was first published by the Global Economic Intersection on 22 August 2021.

- Lawrence Wright, The Plague Year: America in the Time of COVID.