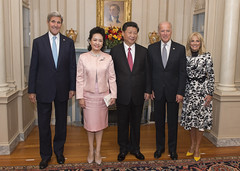 Turmoil In The Indo-Pacific

Some three decades ago, when the Cold War came to an end, there were great hopes, perhaps naive in retrospect, for peace, prosperity and democracy in what we now call the Indo-Pacific. Starting with Japan, a number of Asian countries enjoyed extraordinary economic development. Authoritarian South Korea became a democracy in the late 1980s, and Taiwan would follow a few years later.

This post-Cold War era was to be a new world order led by the US, the only remaining superpower, after the dissolution of the USSR, and the liberation of the countries of Central Europe. Following the 1989 Tiananmen Square incident, China was initially a pariah in the international community, and at that point, its economic reforms and opening were not very far advanced. But China would re-emerge a few years later, when economic reforms were relaunched.

The US’s “unipolar moment", the period when it stood proudly as the world’s only superpower, would not last long. An early sign of the US economy’s fragility was the bursting of the 2000 dotcom bubble. This was quickly followed by the tragic 9/11 attacks which led to America’s forever wars in Iraq and Afghanistan, which were immensely costly both financially and in terms of lives lost. Moreover, these forever wars, somewhat like the Vietnam war of decades earlier, greatly undermined America’s self belief and international trust in the US as a global superpower.

Then came the 2008/9 global financial crisis which shined a terrible light on America’s casino capitalism, destabilised the whole world economy, further widened America’s yawning inequality, drove a rise in populism and arguably led to the presidency of Donald Trump. And then came America’s appalling handling of COVID-19 which highlighted its dysfunctional health system and above all political system.

Perhaps not surprisingly, the American public no longer believes in elite internationalism, and the US is not prepared to play its traditional leadership role -- even though its global leadership over the past 75 years has been arguably the most important factor driving global peace and prosperity, and has been immensely beneficial to the US. Today, the US is not a signatory to either of the mega trade agreements of the Indo-Pacific, namely, the Comprehensive and Progressive Agreement for Trans-Pacific Partnership or the Regional Comprehensive Economic Partnership. In short, the old order is unravelling, and the world is increasingly in disarray.

While America remains indisputably the world’s leading military power, it has also been rapidly losing soft power. What country would want to emulate this US which is riddled with violence, racism, climate denialism, and a distrust of science. Even America’s ever-trusting allies like Japan, Australia and NATO no longer consider it to be a reliable and trustworthy friend. True, President Biden offers hope of some return to normalcy, but who will follow Biden? Donald Trump and his isolationist agenda still have great support in America.

In contrast, China’s rise has taken the world, and even China itself, by surprise. It was given a giant boost by its 2001 membership of the World Trade Organisation. China also exhibited signs of global responsibility when it refrained from devaluing its currency during the 1997 Asian financial crisis, and when it launched its 2008/9 mega stimulus at the time of the global financial crisis.

But China would see the global financial crisis as a sign of American weakness and a strategic opportunity. And following Xi Jinping’s assumption of China’s leadership in 2012/13, China became much more assertive internationally and repressive at home. China’s refusal to address US concerns about intellectual property theft, cyber crime, forced technology transfers, and state capitalism more generally led to Donald Trump’s trade and tech wars. And the US/China relationship has deteriorated further since COVID in light of China’s coverup and lack of transparency regarding the origin of the pandemic, and subsequent “wolf warrior diplomacy". At the same time, beneath China’s assertive veneer lies a fragile and vulnerable China, with its ageing population, massive debt, low productivity, environmental problems, social repression, and looming leadership succession issue.

In 2015, President Obama and President Xi held talks to reduce tensions in cyberspace, and Obama called on Xi to stop stealing US private intellectual property, and stop handing that intellectual property over to Chinese firms. And a National Counterintelligence and Security Center report suggests that the Obama-Xi agreement may well have had the intended effect. But with the advent of the Trump administration, Chinese cyber intrusions resumed apace, and have continued into the Biden administration.

For example, in March this year, Microsoft reported that at least 30,000 customers were affected by a hack that allowed outsiders to access the firm's email and calendar service through a software loophole previously unknown to the company. Volexity, the cybersecurity firm that first discovered the Exchange breach, and Microsoft concluded the attacks originated from China and appeared to be state-sponsored.

And then, last week, US and allies formally and publicly blamed Chinese government-linked hackers for this hack. According to US Secretary of State, Anthony J. Blinken, China’s “Ministry of State Security (MSS) has fostered an ecosystem of criminal contract hackers who carry out both state-sponsored activities and cybercrime for their own financial gain". Unfortunately, there is no sign that the Chinese government has been shamed into stopping these destabilising and irresponsible activities. On the contrary, they vehemently deny the incontrovertible evidence against them.

While Harvard scholar Graham Allison and others speculate as to whether China and America are destined for war, it seems that the two countries are already at war, even if it is not a traditional war. Today’s war is a hybrid war comprising a cyber war, a tech war, a trade war and an information war.

This is turmoil in the Indo-Pacific! And it is difficult to see either side backing down, and where this conflict may finish.

The great tragedy is that while these two great powers compete vigorously for dominance in the Indo-Pacific, and even the world, the future of the planet depends on the capacity of these two to cooperate, standing as they do, head and shoulders over all other countries. As Richard Haas argues in his new book, “The World: a brief introduction", we have a whole set of global issues -- from climate change, management of cyberspace, nuclear proliferation, terrorism, North Korea, and global health -- for which global governance is inadequate. This leaves the world on a very dangerous course, and which can only be really solved by an effective partnership between the US and China, the two major players. Trying to achieve effective agreements between the world’s 180+ countries is futile.

For example, the much vaunted Paris Agreement on climate change will never reduce carbon emissions sufficiently to limit global warming to well below 2 compared to pre-industrial levels -- especially since it is not binding. Only a very ambitious agreement between China and the US, the world’s biggest carbon emitters, which goes well beyond what other countries are willing to do could save the planet. Further, despite the new mantra that COVID-19 is a “once-in-a-century event", that is hardly likely to be the case. We have seen several epidemics in recent years which luckily did not explode into pandemics, and as modern human life encroaches further and further onto the natural environment, there is only a growing likelihood of further pandemics. Effective US/Chinese collaboration will be necessary to tackle these.

In conclusion, looking ahead, it is very difficult to be optimistic. US/China relations are at their lowest ebb, and keep falling lower and lower. From the point of view of the Indo-Pacific and the whole planet, neither the US nor China can win this rivalry. We need both of them to work together to address our many looming challenges.

This article by John West was first published by the Global Economic Intersection.