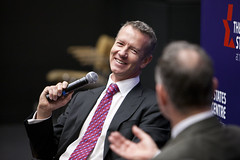 Peter Hartcher’s new book provides a forensic analysis of the deterioration in the Australia-China relationship, with insights and insider information, writes John West.
Australia’s relations with China have never been so bad.  And the Australian government doesn’t seem to have a coherent strategy for dealing with this economic and political behemoth, which has been a major source of Australia’s prosperity for several decades.

How can we understand this situation?  What should Australia do?  Can public opinion play a role in shaping Australian policy? Red Zone: China’s Challenge and Australia’s Future, a new book by Peter Hartcher, goes a long way to answering these questions, and builds upon his recent, well-received Quarterly Essay, “Red Flag: Waking Up to China’s Challenge.”

Hartcher, the well-known political and international editor of The Sydney Morning Herald and The Age, documents the well-known sequence of events that precipitated the deterioration in Australia-China relations. That is, the decision banning Huawei and ZTE from Australia’s 5G network; Australia’s foreign interference and influence laws; decisions to block some proposed Chinese investments on national security grounds; Australia’s call for an independent international enquiry into the origins and initial handling of COVID-19; and Canberra’s cancelling the Belt and Road Initiative agreements signed by the state of Victoria with the Chinese government.

But Hartcher takes us much deeper into the story.  He writes that Australian business and political leaders had become the subjects of China’s “foreign elite capture” policy.  He quotes a Chinese diplomatic defector who claimed in 2005 that the Chinese Communist Party (CCP) had begun a structured effort to infiltrate Australia.

Indeed, Australia had been selected as a “weak link of the western camp.”  And yet Canberra, like many Western governments, had gone soft in its protests over Beijing’s breaches of international law and human rights.  While business leaders might rejoice in receiving foreign investment from China, Hartcher reminds readers that British colonisation of India started with the Indian Mughal princes’ invitation to the East India Company to invest and trade in India.

Hartcher argues that it was the Australian people, rather than the country’s elites, that awoke to the threat of Xi Jinping’s China. The Lowy Institute’s opinion polls of 2016 revealed that Australians were very critical of Xi’s policies. A pivotal event in this awakening occurred when Labor senator Sam Dastyari, a recipient of Chinese largesse, made a Beijing-friendly statement regarding the South China Sea at a press conference to which only Chinese journalists were invited.  The revelation of this event led to Dastyari’s ultimate political demise.

Rory Medcalf of the Australian National University is quoted as saying that “Dastyari unintentionally did the nation a favour,” as business, political, and university elites could no longer ignore China’s influence operations in Australia. “The convergence of Beijing’s bad behaviour, Australian media coverage and public opinion meant that the country’s elites had to defend the national interest above the interests of a foreign authoritarian power.” Former politicians Paul Keating, Bob Carr, and Alexander Downer would gradually resign from their Chinese or Chinese-financed positions with the China Development Bank, the University of Technology, and Huawei, respectively.

So it was that under Prime Minister Malcolm Turnbull, the Australian government ultimately implemented its espionage and foreign interference, and foreign influence transparency laws, as well as banning Huawei from its 5G network. But it was not easy – Turnbull had to confront deep complacency in government, big business, and universities.  Implementation of these laws was initially slow, but the past year or so has seen a more muscular approach to implementation under Prime Minister Scott Morrison.

Another interesting part of Hartcher’s book is his argument that Australia has inadvertently become an international case study in how to stand up to China.  He quotes a report from the Center for Strategic and International Studies, a US think tank, which describes Australia as a “canary in the coalmine” – a cautionary tale about the ways in which China seeks to covertly influence and interfere with the political process in advanced democracies.

He also quotes some former senior US officials who argue that “Australia has woken up people in a lot of countries” and “Australia has done us a great service.”  According to Chatham House’s Bill Hayton, “Australia is way out in front of the rest of the world in thinking about Chinese influence and operations.”  Indeed, contrary to Beijing’s claims that Canberra merely follows Washington, Australia was the first country in the world to exclude Huawei from its 5G network.  However, as New Zealand’s Anne-Marie Brady reminds us, “there will be people resisting all along the way” – the political, business, and university elites that benefit most from Chinese largesse.

Hartcher has a scattering of interesting references to the CCP – it is “in essence a secret society,” with a “striking resemblance to an underworld mob,” but it would be an insult to the Mafia to compare it to the CCP.  However, this may be the only way to understand things like the unpublicised kidnapping of Australian citizens from Australia by covert Chinese operatives, as well as the arrest without due process of Australian business journalist Cheng Lei and Australian writer Dr “Henry” Yang Hengjun.  It also may be the only way to understand the infamous list of 14 demands of Australia that two Chinese diplomats handed over to an Australian journalist in November 2020, and which are an affront to Australian sovereignty.

Hartcher concludes that Australians must “brace” themselves for a future with totalitarian and imperial China. “Australia needs to toughen its mindset and institutions for the hard struggle ahead” – well beyond the measures implemented to date. Referring to China, Hartcher says, “A country with a national inferiority complex, ruled by a fearful party and led by a paranoid leader, is a volatile place, not at ease with itself.” And democracies like Australia are unfortunately starting from a very poor level of comprehension of China’s political system. In this regard, Hartcher’s book is a very timely, well-written, and useful resource for interested citizens, students, and policy makers, even though it is at times repetitive and covers much familiar territory. Given the effective role of public opinion in shaping recent policy developments, a well-informed public will remain crucial to the health of Australia’s democracy and the strength of its sovereignty.

This article by John West was first published by the Australian Outlook by the AIIA.