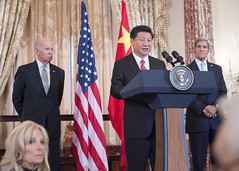 The prospects for a stable relationship between the US and China based on confidence and competitive interdependence look very slim, writes John West.

The US and China stand head and shoulders above all other countries—in terms of total GDP, military spending, R&D spending and so on—and increasingly so. But both are riddled with economic and political fragilities, and relations between them have rarely been so bad in the modern era.

How will it end?

Just back in 2015, under the Obama presidency, the US welcomed “the rise of a stable, peaceful and prosperous China” and sought “to develop a constructive relationship with China that delivers benefits for our two people and promotes security and prosperity in Asia and around the world”.

A ground-breaking commitment with China to reduce greenhouse gas emissions laid the foundations for the Paris Agreement on climate change.

Only a couple of years later, under the Trump administration, there was a complete volte-face. Vice-President Mike Pence described it as a new era of “great power competition”, where “Beijing is employing a whole-of-government approach, using political, economic, and military tools, as well as propaganda, to…exert influence and interfere in the domestic policy and politics of our country”. And President Trump unleashed a trade war.

There was talk of a change in approach following President Biden’s election win, but since he took office in January, he too has vowed to get tough on China and maintained most of the previous administration’s policies.


The rapid unravelling of relations

China interpreted the 2008-09 Global Financial Crisis as a sign of weakness and decline of the US, and a strategic opportunity. It did not imagine the US would bounce back decisively, and be at its strongest ever point on the eve of the COVID-19 pandemic. So it was that China progressively abandoned the wisdom of great leader Deng Xiaoping for China to hide its strength and bide its time. And when XI Jinping assumed the leadership of China in 2012-13, he adopted assertive foreign policies, under the banner of his China dream of “the great rejuvenation of the Chinese nation”.

China’s new assertiveness could be seen in its occupation and militarisation of much of the South China Sea, its crackdown in Hong Kong, and its threatening behaviour towards Taiwan and Japan. It also sought to reshape the world order through the establishment of the Asian Infrastructure Investment Bank, and the Belt and Road Initiative, establishing the BRICS group as a rival to the G7 and strengthening the Shanghai Cooperation Organisation.

Moreover, China has made clear that it opposes US alliances with a number of Asian countries (Japan, Korea, Thailand and the Philippines – and Australia), and that “Asia is for Asians”. At home, China became more repressive, notably against ethnic minorities like the Muslim Uighurs.

Under Donald Trump’s presidency, we saw an acceleration in the gradual unravelling of its constructive posture towards China through the Obama years (2009-2017).  Underneath the narrative of constructive engagement, American dissatisfaction with the relationship had been brewing for many years. American manufacturing workers had suffered wage stagnation and job losses for years, something which many commentators put down to outsourcing of manufacturing to China.

There was also growing dissatisfaction in the business community with China’s relatively closed markets, subsidies to state-owned enterprises, forced technology transfers, intellectual property theft and cyber intrusions. This was accompanied by a change in elite thinking, reflected in books like Michael Pillsbury’s “Hundred Year Marathon: China’s Secret Strategy to Replace America as the Global Superpower” and Graham T. Allison’s “Destined for War: Can America and China Escape Thucydides’s Trap?”

Then-candidate Donald Trump was able to amplify these sentiments, and make China-bashing the centrepiece of much of his foreign policy. And when President Trump launched his trade war against China, unlike in the past, the US business community did not rise to the defence of China.

While trade, business and human rights issues are key sticking points in the relationship, however, fundamentally the US has come to see China as a threat to its leadership in Asia and globally, and also a threat to the rules-based world order that the US has led since the end of World War 2. And with the rise of Chinese tech giants such as Huawei, Alibaba, Lenovo, Tencent and Xiaomi, a battle for global tech dominance has become the centre of this great power rivalry.

Two fragile superpowers slug it out

As these two economic and geopolitical heavyweights face off against each other, they are both deeply fragile, and increasingly so – something highlighted by the COVID-19 pandemic. While Chinese scientists spotted the virus early, China’s poor governance was highlighted by its slow sharing of information on the pandemic, and slowness in locking down, thereby facilitating its spread to the world. Even today, China resists pressure to be fully transparent about COVID-19. In short, trust in China as a responsible global leader and citizen has been frittering away over the past year.

COVID-19 has highlighted the strengths and weaknesses of the US too. The continuing brilliance of American science and technology is evident in the highly successful development of vaccines by companies such as Pfizer, Moderna and Johnson & Johnson. But the problematic nature of US governance was flashed on television screens for the world to see, as this once great country led the world in COVID-19 cases and deaths for a period of time last year.

These experiences with COVID-19 sit on foundations of deep insecurity and fragility.  This has been both a recurrent and curious feature of America’s post-war history. It went through periods of self-doubt when faced with the apparent strength of the Soviet Union, the loss of the Vietnam war, the rise of Japan, global terrorism following 9/11, and the Global Financial Crisis. Things seemed to be only getting worse in recent years. It is a country fractured and polarised by inequality, violence and racism. And it has become an unreliable superpower, as domestic and international policy stances swing wildly from Democrat to Republican and back again to Democrat administrations.

It is sometimes hard to believe this picture painted of the world’s leading economic, political and military power. It is equally difficult to grapple with the deep fissures in China, which tries to project strength.

Chinese leaders strut the international stage as a great and new world leader. While China’s total GDP may be in the same ballpark as America’s, its GDP per capita is only about one quarter of America’s, its working age population has been declining over the past decade, its total debt has risen to 270% of GDP, and its productivity growth has declined steadily since the 2008 Global Financial Crisis, according to the IMF.

In his recent book, “Stronger”, Ryan Haas argues that the US and China have a relationship of “competitive interdependence”.  This interdependence has been very beneficial for both sides, and yet they also have an immense capacity to inflict pain on the other. Haas argues the US needs to accept the rise of China, rather than try to stop it, and accept competition as a condition to be managed rather than a problem to be solved. At the same time, it should stick to its values and interests in its foreign policy with China. Above all, the US should have confidence in its strengths vis-a-vis China, and concentrate on further strengthening its economic edge and investing in strategic allies and partners, rather than seeking to slow China down. China is not ten foot tall!

A China with greater self-confidence could also be helpful for more peaceful relations between the two countries. But under President Xi Jinping, the Communist Party, once admired for its technocratic brilliance, has cast a Leninist shadow over the economy, adversely affecting productivity, as economic reform has moved backwards. In particular, state-owned enterprises and banks are favoured over the private sector. Free-wheeling, innovative private entrepreneurs like Alibaba’s Jack Ma can be punished by the government. The latest Five-Year Plan looks inward as it emphasises “self-reliance”, especially in the technology field, as the government feels threatened by “hostile foreign forces”. And members in the Belt & Road Initiative are preferred partners for trade and investment.

Unfortunately, prospects for a stable relationship based on confidence and competitive interdependence look very slim. Indeed, the inherent instability in a relationship between fragile superpowers only fosters the risk of political accidents. Many future scenarios, too horrible to think of, are possible. For example, a scenario of Chinese overreach (such as invading Taiwan), followed by American overreaction, can be disastrous.

For these reasons, the world has now entered its most potentially dangerous phase in many decades.

This article by John West was first published by Unravel on 25 May 2021.