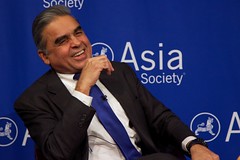 Kishore Mahbubani challenges America to think the unthinkable -- that China might win!
Kishore Mahbubani argues the US has launched a contest with China, while ignoring the advice that geopolitical sage George Kennan gave America during the Cold War. Namely, that it should maintain spiritual vitality at home, cultivate friends all over the world, not insult its adversary, and be humble.

Singapore’s renowned polemicist, Kishore Mahbubani, regularly provides readers with provocative insights and fascinating food for thought.  And his latest book, Has China Won? The Chinese Challenge to American Primacy, certainly does not disappoint, even though it does not squarely answer the title’s question. Mahbubani’s paradoxical conclusion is that “a major geopolitical contest between America and China is both inevitable and avoidable.” He fears a great and unnecessary tragedy coming from the geopolitical contest between America and China, a contest which has only been aggravated by COVID-19.

The strategic rivalry between China, the rising power, and the US, the status quo power, has been triggered by mistakes, misconceptions, and misunderstandings on both sides, according to Mahbubani.  First, China made a grave strategic mistake when it alienated America’s business community, partly through forced intellectual property transfers and theft, cyber intrusions, and failure to abide by agreements – as well as official arrogance after the 2008 Global Financial Crisis, which it interpreted as a strategic opportunity for China.  So unlike in the past, the American business community did not come to the support of China when Donald Trump was launching his trade war.

Mahbubani argues that America made an even greater strategic mistake, which was to launch its geopolitical contest with China without having a comprehensive long-term strategy on how to deal with a country like China, something which will be hopefully rectified by the Biden administration. Mahbubani picked up this insight through his discussions with none other than Henry Kissinger.

China’s militarisation of the South China Sea is widely seen as evidence of a China that reneges on its promises and of an “expansionist China,” and it has undermined Western trust in China.  In countering this argument, Mahbubani cites Stapleton Roy, a one-time US ambassador to China.  The story goes that US President Barack Obama would have rebuffed a “more reasonable approach on the South China Sea” by Chinese President Xi Jinping, and that the US Navy then stepped-up patrols in the area.  It was only then that China responded with militarisation of the South China Sea.

Mahbubani seems to delight in surprising his readers with unexpected comparisons. He argues that during the Cold War, America was often supple, flexible, and rational in its decision making, while the Soviet Union was rigid, inflexible, and doctrinaire. But today, he argues that we should replace the word America with China and the words Soviet Union with America, most notably when it comes to defense spending.

Mahbubani is at his most vociferous in defending China’s authoritarian governance. He sees the Chinese government as being perhaps the most meritocratic in the world, and certainly the most successful in China’s long history. The great fear of Chinese people is chaos, so strong central rule is the most effective way for holding the country together. He puzzles at why America should promote the democratisation of China when the Chinese Communist Party is so popular. But his many spurious assertions on Chinese versus American values are among the weaker points of the book.

In one of the most interesting sections in the book, Mahbubani argues that “The single biggest obstacle to improving relations between America and China is a powerful but invisible mental construct that has been deeply embedded in American minds: the assumption of virtue.” He takes America to task for its notion of American exceptionalism and superiority, which is no longer valid, if it ever was, and leads to condescending and arrogant attitudes when it negotiates with countries with different systems. Further, he argues that America’s attitude towards China is motivated by the emotional fear of the “yellow peril.”

Mahbubani judges that the America of today is a rigid and inflexible plutocracy, rather than a meritocratic democracy. Indeed, over the past thirty years, more than half the US population has a declining standard of living. In contrast, the past thirty years have been the best in the long history of the Chinese people, as poverty has been slashed and access to education, healthcare, and overseas travel has opened as never before. In these circumstances, how can Americans be telling the Chinese people to get rid of Communist Party?

The book is riddled with questionable assertions. For example, Mahbubani sees the American economy inevitably sliding down to world number two, but makes little mention of the many challenges facing China’s economy, like debt, ageing population and weak productivity growth. He claims that China is more capitalist than America, even though President Xi is pushing the economy towards more state capitalism, and tightening the screws on Jack Ma, the country’s most successful entrepreneur. To deal with China, Mahbubani recommends that the US strengthen the multilateral, rules-based order, as China is a great beneficiary and supporter of multilateralism. However, the Belt and Road Initiative and China’s economic coercion of Australia, Japan, Korea, Norway, and the Philippines highlight China’s preference for bilateralism over multilateralism.

Mahbubani concludes that America and China can avoid the impending tragic contest between the two countries by recognising that their priorities should be the wellbeing of their respective peoples, rather than competing with each other. In particular, he recommends that the US should cut its military spending by half, and invest in the wellbeing of American society, notably the 50 percent who have seen their incomes fall over the past 30 years.  This Panglossian scenario is highly unlikely in a world where China’s grand strategy is the survival of the Communist Party at all costs, where America’s political economy is so dominated by vested interests, and where there is very little trust between the two sides.  There may however be some hope that the two great powers heed Mahbubani’s call to work together on global issues like climate change, although the management of COVID-19 has exposed the limitations on cooperation.

Mahbubani’s underlying message is that both countries should make much greater efforts to understand, respect, and accept each other – a message that is equally relevant since the election of President Biden, subsequent to the book’s publication.  In this context, the book makes an important contribution, and is worthy of reading.