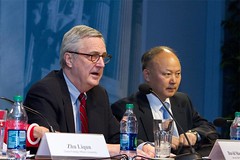 The dominant narrative in Southeast Asia is that China is drawing all the region’s states into its sphere of influence. David Shambaugh challenges this view.
“We see China as a neighbouring power that is here to stay, which is not so clear with the USA. America is a new power in Asia, China is not. For us, US power is waning and China’s is rising. The last 200 years have been an aberration in China-Southeast Asian relations — it is now returning to a more traditional state.” These comments from a Southeast Asian official to Professor David Shambaugh reflect a widespread sentiment in the region. But this narrative does not accurately represent the political reality of Southeast Asia, writes Shambaugh in his new book, Where Great Powers Meet: America and China in Southeast Asia.

The starting point in Shambaugh’s analysis is that the US and China are now locked into indefinite comprehensive competition, which is taking place in all regions of the world. Southeast Asia is an interesting microcosm of that competition, exemplified across the ten members of the Association of Southeast Asian Nations (ASEAN). However, Southeast Asia is well used to great power competition, and to cope, these countries have learned about hedging and neutralism which are baked into their DNA. They don’t want to get too close to any one country and seek to maintain their independence.

In his book, Shambaugh contests the dominant narrative that China is sucking all the region’s states into its sphere of influence, that a twenty-first century tribute system is being established, and that China’s dominance is a natural state of affairs. He argues that China is a very uneven power, possessing strengths in international trade and influence operations with the Chinese diaspora, yet great weaknesses in its security assistance programmes, diplomacy, and soft power.

China’s Belt and Road Initiative (BRI) is welcomed by most in the region, and it is greatly needed considering the region’s massive infrastructure deficit. However, China has been prone to overreach, and has encountered pushback in a number of countries, notably Myanmar, Malaysia, and Indonesia. This pushback eventuated due to debt problems and concerns projects benefit Chinese workers and companies more than local economies. This could be a harbinger of things to come in other countries.

Shambaugh detects substantial ambivalence and suspicion about China in every country throughout the region, which is confirmed by public opinion surveys. But countries don’t speak up out of fear of being sanctioned by China. China has achieved “discourse veto power.” For example, Muslim majority countries like Indonesia and Malaysia have grave concerns about the internment of Uyghurs in Xinjiang but won’t publicly condemn them.

Overall, Shambaugh writes, China is doing itself a lot of damage. It needs to listen better and be more sensitive to the concerns of other countries. But Chinese officials are on autopilot, are tone-deaf, live in an echo chamber, and believe their own propaganda.

Shambaugh has a much more positive assessment of the US as an underappreciated power in Southeast Asia. He writes the US dwarfs China in the security assistance field. All the national security establishments in Southeast Asia except Cambodia, Laos, and Myanmar have close ties with the US, even though governments are very reluctant to talk publicly about this cooperation.

While China might be the region’s leading trade partner, the US is ahead of China when it comes to foreign direct investment (FDI). In 2018, FDI from US firms was twice that from China. The accumulated stock of American FDI in Southeast Asia is greater than China, Japan, and Korea combined, as some 4,200 US companies are operating in the region. In fact, the EU is the biggest investor in Southeast Asia.

Shambaugh believes US soft power is much greater than China’s, thanks to its highly rated universities and popular culture — despite the loss of credibility due to Donald Trump’s Islamophobia, withdrawal from the Trans-Pacific Partnership, and chaotic management of COVID-19. US “fly-in, fly-out” diplomacy is, however, a real point of weakness. Following a golden era during the Obama presidency, the US position suffered during the past four years, with only an episodic presence in ASEAN meetings. Moreover, the US did not have an ambassador in Singapore, its closest partner in the region, during the Trump administration.

Overall, Shambaugh estimates that the US has substantial strengths in Southeast Asia — and much greater strength than China — but he observes that Southeast Asians have little appreciation of the breadth and depth of the American presence in the region. The US is taken for granted and receives little coverage in regional media (much of which is now owned by China). In short, the US government has a major public diplomacy challenge especially if, as Shambaugh believes, China-US competition is going to be mainly played out in the information space.

This book offers a wealth of information, especially historical, on Chinese and American relations with the region. Of particular interest is Shambaugh’s observation that Thailand, once a very close US partner, has now swung into the Chinese orbit. After the 2014 coup, the US cut cooperation in numerous areas, opening space for China. Today, the Thailand-China security and military relationship is too close for comfort from an American perspective.

Vietnam welcomes its relationship with the US. But it is reticent to get too close, particularly in the defence realm. The China-Vietnam relationship is a lot closer than many Americans understand. China’s occupation and militarisation of the South China Sea is an important concern for Vietnam, but it is much less so for other countries. The South China Sea is a bigger issue in Washington than it is in the region, according to Shambaugh. Southeast Asia’s biggest concern with China is a feeling of being overwhelmed — too much commerce, and too much diplomatic manipulation.

Shambaugh believes that the US is well placed to compete with China in Southeast Asia. There is an intrinsic reservoir of admiration and goodwill, and the US can be an effective offshore balancer of China. It just needs to be more present, invest in its tools of power, and offer Southeast Asians an alternative to China. At the same time, Shambaugh estimates that seven of ASEAN’s ten countries align with and tilt toward China, while only three countries — the Philippines, Singapore and Vietnam — are closer to the US.

Shambaugh’s book makes a very important contribution on this critical issue in Australia’s neighbourhood — even if one can doubt his optimism on America’s role in the region — and should be required reading for all Asia-watchers. However, one important issue that Shambaugh does not address is the impact of the absence of US leadership through COVID-19 and the possibility that China might steal a march through vaccine diplomacy.

More generally, the book reads as a contest between China and the US in Southeast Asia in which there are no other players. In particular, there is virtually no mention of middle powers like Japan, Australia, South Korea, and India, and no suggestion of how the US could work in concert with these middle powers to counter the influence of China. Australia can only hope that President Joe Biden’s promise to “repair our alliances and engage with the world once again” will lead to close cooperation in Southeast Asia.