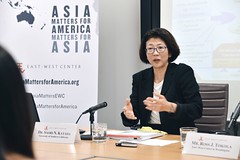 In her new book, Saori Katada details the country’s shift from being perceived  as a trade villain to an active promoter of an open, rules-based regional trade order, writes John West.

Japan was rarely known for domestic or international economic leadership during the Cold War period. Indeed, Japan was often seen as a trade villain by the US and Europe, as it resisted pressure to open its markets. But Japan’s geoeconomic strategy has shifted in the last quarter century.  As Saori Katada argues in her new book, Japan’s New Regional Reality, Japan has emerged as an active promoter of an open and rules-based regional order.

Japan’s “old style” geoeconomics of the 1970s and 80s is described by Professor Katada as bilateral (especially with the US), informal (with no legal instruments), and mercantilist, meaning that Japan tried to export as much as possible and generate trade surpluses. But since the late 1990s, Japan has pursued a diametrically opposed state-led liberal strategy, which is more regional, institutional, formal, and liberal in approach. To make her case, Katada examines three issues: trade and investment, money and finance, and development and foreign aid.

Japan’s embrace of multilateral trade and investment has been the big success story in the country’s new geoeconomic strategy, according to Katada. It began with bilateral economic partnership agreements (EPA) with some ASEAN countries, followed by an investment treaty with China and South Korea and work towards the Regional Comprehensive Economic Partnership which was finalised recently, after the book’s publication.

Japan’s shining moment was taking the lead, together with Australia and New Zealand, in the resuscitation of the Trans-Pacific Partnership (TPP) after Donald Trump withdrew the US from the trade deal. This is amazing for a country which only a couple decades before blocked an APEC proposal to make specific commitments to trade liberalisation. In addition, an EPA between the EU and Japan entered into force on 1 February 2019, while the UK-Japan Comprehensive EPA was agreed in principle on 11 September 2020.

Following the 1997-99 Asian Financial Crisis, Japan played a key role in developing regional cooperation for money and finance, writes Katada.  Key elements include the Chiang Mai Initiative Multilateralisation, Asian Bond Market, and the ASEAN+3 Macroeconomic Research Office. In the area of foreign aid and development, Japan has been emphasising the multilateral role of the Asian Development Bank, and the importance of quality infrastructure, as well as following the OECD Development Assistance Committee’s rules on untying aid.

But what has been driving the shift in Japan’s new geoeconomic strategy over the last quarter century? The rise of China and shifting regional power balance has pushed Japan towards a “rule-setting” geoeconomic strategy. In addition, with Japan suffering from long-term economic stagnation, it has become increasingly reliant on the Asian market as a source of economic growth. And as Katada argues, the shift may also be a reflection of Japan’s maturity as an economic power.

According to Katada, domestic political economy factors are also relevant.  While the Japanese government played a strong role in facilitating development in the postwar period (“developmental state”), companies are now more independent of the government and more market oriented. Overseas investment has also become more important than exports for many Japanese manufacturing companies. These companies are worried about the protection of their overseas assets and intellectual property. They are also concerned about the legal and logistical environment in which they operate.

Katada notes that the transformation in Japan’s geoeconomic strategy has not always been smooth. For example, a proposal to create an Asian Monetary Fund was opposed by the US, China, and the International Monetary Fund.

One facet of Japan’s geoeconomics that Katada unfortunately did not cover is migration. Neither the word “migration” nor “immigration” appears in the book’s index. This is surprising, given Japan’s rapidly ageing population and the various initiatives to open the country to more foreign workers. These initiatives have had rather mixed success, and highlight Japan’s ethnonationalism, something which casts a shadow on the country’s soft power in the region.

While this may sound promising for regional trade, it could provide the greatest test for Japan’s middle-power leadership. Some CPTPP signatory countries, like Australia, which have been victims of China’s economic coercion may have concerns about its possible membership. Moreover, the CPTPP contains several chapters and provisions – such as for state-owned enterprises, intellectual property, investor-state dispute settlement mechanisms, and compliance with internationally recognised labour rights – which are at variance with China’s model of state capitalism.

It is not impossible to imagine that China, as the dominant trading nation in the region, may seek to use its market power to dilute these aspects of the CPTPP agreement. In order to save the high quality provisions of the CPTPP, Japan’s best strategy may be to try to encourage the US to rejoin the agreement, although achieving this could be equally challenging in the current American political context.

Katada’s new book is a very important work, as it shines a light on Japan’s role as, in the words of Mireya Solís, an “underappreciated power.” While China may have emerged as Asia’s most important economic power in Asia, its ambition to become the region’s hegemon is limited by the presence of Japan. Japan remains the world’s third largest economy. It is working ever more closely with other regional middle powers like Australia and India, along with the ASEAN countries, and is hoping for a more constructive approach from the US under the Biden administration.