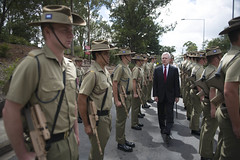 "This simple truth is this: even as we stare down the COVID pandemic at home, we need to also prepare for a post-COVID world that is poorer, that is more dangerous, and that is more disorderly.

"We have been a favoured isle, with many natural advantages for many decades, but we have not seen the conflation of global, economic and strategic uncertainty now being experienced here in Australia in our region since the existential threat we faced when the global and regional order collapsed in the 1930s and 1940s.

"Now, we must face that reality, understanding that we have moved into a new and less benign strategic area, one in which the institutions of patterns of cooperation that have benefited our prosperity and security for decades, are now under increasing - and I would suggest almost irreversible - strain.

"The Indo-Pacific is the epicentre of rising strategic competition.

"Our region will not only shape our future, increasingly though, it is the focus of the dominant global contest of our age.

"Tensions over territorial claims are rising across the Indo-Pacific region, as we have seen recently on the disputed border between India and China, and the South China Sea, and the East China Sea.

"The risk of miscalculation and even conflict is heightening.

"Regional military modernisation is occurring at an unprecedented rate.

"The first objective is to shape Australia's strategic environment.

"Now, the Indo-Pacific is where we live and we want an open, sovereign Indo-Pacific, free from coercion and hegemony.

"Our first job is always our first job, and it is in our region we must be most capable and the military contributions we make to partnerships and to our ever-closer alliance with the United States, which is the foundation of our defence policy.

"The security assurances and intelligence-sharing and technological industrial cooperation we enjoy with the United States are, and will remain, critical to our national security.

Prime Minister Morrison's comments seem very wise and considered. But is the Defence Strategic Update enough at a time when the US is becoming an unreliable partner?  Alternatively, is Australia being drawn too much into the US/China strategic competition, as both rivals are in the midst of election campaigns?  Can we not have a more peaceful relationship with our largest economic partner?

"Our region is in the midst of the most consequential strategic realignment since the Second World War, and trends including military modernisation, technological disruption and the risk of state-on-state conflict are further complicating our nation’s strategic circumstances.

"The Indo-Pacific is at the centre of greater strategic competition, making the region more contested and apprehensive. These trends are continuing and will potentially sharpen as a result of the coronavirus (COVID-19) pandemic.

"The Government has directed Defence to implement a new strategic policy framework that signals Australia’s ability – and willingness – to project military power and deter actions against us.

"The Government will also continue deepening our alliance with the United States and strengthening our regional engagement across the Indo-Pacific, including through the Pacific Step-Up, and increase the Australian Defence Force’s ability to respond to natural disasters, including within Australia.

"Strategic competition, primarily between the United States and China, will be the principal driver of strategic dynamics in our region. This competition is playing out across the Indo-Pacific and increasingly in our immediate region: the area ranging from the north-eastern Indian Ocean through maritime and mainland South East Asia to Papua New Guinea and the South West Pacific.

"Since 2016, major powers have become more assertive in advancing their strategic preferences and seeking to exert influence, includingChina’s active pursuit of greater influence in the Indo-Pacific. Australia is concerned by the potential for actions, such as the establishment of military bases, which could undermine stability in the Indo-Pacific and our immediate region. It is essential that countries pursue their interests in ways that are mutually respectful and supportive of stability, prosperity and security.

"Some countries will continue to pursue their strategic interests through a combination of coercive activities, including espionage, interference and economic levers. Tensions over territorial claims and the establishment of new military facilities are rising and are involving the use of military or para-military forces more frequently than in the past, including coercive para-military activities in the South China Sea.

"Grey-zone activities are being adopted and integrated into state craft and are being applied in ways that challenge sovereignty and habits of cooperation.

"The rules, norms and institutions that help maintain peace and security and guide global cooperation are under strain.

"At the same time, many countries in the Indo-Pacific are accelerating their military modernisation, enabled by a long period of economic growth. The rapid spread of technology will both support and challengeDefence’s requirement to maintain a regional capability edge in advanced war fighting and enabling capabilities.

"Emerging and disruptive technologies will be rapidly translated into weapons systems – such as sophisticated sensors, autonomous systems and long-range and high-speed weapons – reducing decision times and improving weapon precision and lethality.

"The increasing connectivity of services and infrastructure to the internet will expose vulnerabilities in global supply chains, critical infrastructure and support services.

"Major power competition, coercion and military modernisation are increasing the potential for and consequences of miscalculation.

"In this era of considerable change, the COVID-19 pandemic is creating even more uncertainty. The precise long-term security implications of the pandemic are not yet clear, but its impact on regional growth, trade and societies will have lasting consequences. The enormous economic impact of measures to contain the spread of the virus will set back development. This economic shock could undermine political and social stability. Far-reaching measures introduced in some countries to fight the pandemic could be used to reduce political freedoms.

"It is unlikely that the pandemic will fundamentally alter either the longer-term shift in relative global economic and strategic weight to the Indo-Pacific or China’s more active pursuit of greater influence in the Indo-Pacific... Strategic competition between the United States and China is unlikely to abate, and the pandemic has sharpened aspects of this competition.

"The pandemic has disrupted globalised supply chains, which over time have become a critical element of many of Australia’s national economic sectors and Defence capability planning. A new focus on independent sovereign industrial capability has emerged. In the first instance, this has manifested in a need to produce the equipment and supplies required for the health response to the pandemic. Over the longer term, the pandemic has highlighted the potential vulnerability of global supply chains in providing critical defence supplies and equipment.

"Threats to human security – such as pandemics, and growing water and food scarcity – are likely to result in greater political instability and friction within and between countries and reshape our security environment, including in the Indo-Pacific.

"State fragility, exacerbated by governance and economic challenges, has the potential to facilitate threats to the region including the spread of terrorism and activities that undermine stability and sovereignty.

"While the actions of nation states, especially strategic competition, will be the principal driver of our strategic environment, the threat from terrorism and violent extremism will persist.