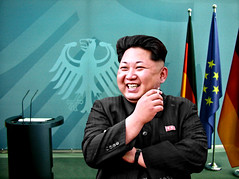 China’s developmental peace approach to North Korea reads like a soft carrot and stick approach, writes John West.
China and North Korea are an odd couple. The Beijing-Pyongyang relationship has long been described as being as “close as lips and teeth.” Yet for the first six years of Kim Jong-un’s leadership, he had frosty relations with Beijing.  It was only as Kim was preparing for his first meeting with US President Donald Trump that Chinese President Xi Jinping hastily organised their first meeting.

Despite these close economic relations, China has supported United Nations sanctions against North Korea’s nuclear missile development.  And yet China is regularly accused of not enforcing these sanctions.

How can we understand this curious relationship? Fortunately, a new publication — China-North Korea Relations: Between Development and Security — provides some insightful analysis.

As the book’s editors, Catherine Jones and Sarah Teitt, highlight “The North Korea problem can be seen to encompass three aspects: (1) a security problem concerned with nuclear proliferation and threats; (2) a development challenge; and (3) a human security and protection problem.  However, North Korea’s problems are not discrete or separable, but rather these challenges are interrelated.”

The book’s authors argue that in order to manage the complex and difficult relations, China employs a “developmental peace” or “Chinese peace” approach, whereby conflict is mitigated through the provision of non-coercive development assistance.  China’s “unique understanding of the development-security nexus” is argued to see state-led economic development with minimal external political interference and strong state control over society as the path to long-term peace, state and regional stability, and human security. It is “argued that developmental peace can be understood as China’s propositions for how conflict-affected or crisis-ridden states can find a way out of their interrelated security and development challenges, and Chinese ideas for how regional and international actors can best support this aim.”

This approach brings together various strands of Chinese thinking on the mutually reinforcing relationship between economic development, state stability, and international peace and security, and has evolved from China’s peacekeeping practices.  However, China has been both praised and criticised for its unique approach, which is seen by many as being consistently contradictory.

At the same time, China acts in a manner to protect its own security.  Indeed, China’s north-eastern provinces, where many people of Korean ethnicity live, are heavily dependent on trade with North Korea.

Overall, China’s developmental peace approach to North Korea reads like a soft carrot and stick approach.  The intensity can vary according to the actor, the issue, and the moment for fostering peace, security, and development.

The different contributors demonstrate how the lens of developmental peace helps to explain the rationale behind, as well as contradictions and challenges in, China’s relations with North Korea on a range of issues such as denuclearisation, water and energy security, human rights, and economic development.

The analysis of China’s developmental peace approach is in sharp contrast to most existing analyses of China’s engagement with North Korea, which focus on the strategic logic of Chinese policy like their historical ties, North Korea’s role as a buffer zone between China and the US military stationed in South Korea, or Beijing’s concern over a potential collapse of the North Korean regime that could usher an influx of refugees into China’s north-east region.

This volume features top scholars from China and South Korea, as well as primary evidence from China, North Korea, and South Korea. The book greatly improves the understanding of the current perspectives in each state, and the impact they have on this vital security relationship.

Notwithstanding the originality of the book’s analysis, there may be other possible interpretations of China’s approach based on its economic relationships with other countries, and notably, the Belt and Road Initiative.  As China develops deep economic relationships with other countries, it can leave partners vulnerable to economic and political coercion, and force them to follow Beijing’s wishes.  China’s economy is so large relative to most others that this power imbalance can give China great leverage.

At this point in time, Beijing seems to have limited control over Pyongyang for various reasons.  For example, Kim knows that Beijing is very keen to keep his regime in place.  Beijing enjoys using its relationship with Pyongyang as a bargaining chip with the US, which is reliant on Chinese cooperation for managing North Korea. But it is also possible that if Beijing can sufficiently ramp up the economic relationship with Pyongyang over time, the latter may become so reliant on Beijing that it can use this as leverage.

Given the opacity of both the Beijing and Pyongyang regimes, we may never fully understand the real nature of the relationship between the two.  Nevertheless, this volume provides much food for thought, and students and scholars of Asian studies – and in particular, Chinese studies – will appreciate the in-depth analysis of China’s approach to relations with North Korea, as well as the first-hand evidence used.

This book review was first published by the Australian Institute of International Affairs.