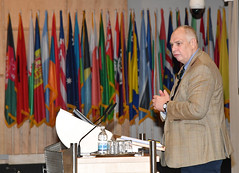 China’s Silk Road policy is an unashamed attempt to compete with the West and extend its influence writes Julian Lindley-French.
“…if some [EU] countries believe that they can do clever business with the Chinese, then they will be surprised when they wake up and find themselves dependent”. German Foreign Minister Heiko Maas, March 2019

Source code is the software ‘brain’ at the heart of a computer, its directing command. Control source code and one controls the machine. And, as man and the machine become ever more intertwined via the internet of things, control the machine and one controls mankind. It is that threat which is behind going Western concerns about China’s digital Silk Road, its funding of global 5G networks, and the role being played by its surrogate company Huawei.

The other day at Munich Airport I enjoyed a coffee with General James L. Jones, NATO’s one-time Supreme Allied Commander Europe. General Jones talked eloquently about the threat posed by China and its efforts to control Europe’s 5G future.  As he spoke my mind cast back to an earlier age when technology again changed the strategic balance at an instant. In 1906 the Royal Navy launched HMS Dreadnought – the world’s first all-big gun, big armour, turbine- driven battleship which made every other warship afloat obsolete. 5G threatens to do the same thing but on a much grander digital scale than any single ship could ever do.

In a sobering paper for the Strategic Insights Program of the Atlantic Council’s Scowcroft Center for Strategy and Security General Jones is clear, “5G is a fifth generation “disruptive” technology which, when used in its secure mode, will transform our societies in ways that we are only starting to understand”.  At its heart, 5G is a way to fast super-network stand-alone computers undertaking a myriad of functions critical to our daily lives. At best, such a network offers life-transforming super-efficiency thus reducing the cost of actions for greatly increased output. At worst, control of such a network offers critical command over those same actions and, by extension, the lives of our states, institutions and ourselves.

5G will also have a host of military applications, not least as the beating heart of artificially-intelligent drone swarms – the digital ‘queen’, if one will, of an attack hive. During any major attack future war would see such swarms probe, fail, learn and finally overcome defences and then intelligently exploit such weakness to devastating effect. Digital decapitation?

Why China? At the centre of Jones’s paper is a profound warning about China’s role in developing digital coercion as part of wider complex strategic coercion. As Jones states, “Huawei is a tool of state power and a critical asset in China’s global economic and geopolitical competitions and ambitions”. Even the most cursory glance at Chinese national strategy confirms Beijing’s strategic intent to use whatever means at its disposal –financial, economic and, if needs be, military - to gain strategic advantage.

The specific danger from Huawei is that because it is an agent of the Chinese state it is significantly cheaper than its Western commercial competitors. What Huawei offers is not simply a 5G ‘product’ but an entire digital infrastructure.  Imagine a digital version of all the roads, railways and airport in your Western state that is what Huawei, and by extension China, is offering.  Now, imagine that as part of the ‘package’ your state effectively hands over access to your digital roads, railways and airports to China. The Huawei ‘deal’ is thus lucrative, seductive and utterly dangerous.

It is a threat reinforced by work the British have been doing to identify the controlling source codes of the Huawei capability. In 2010 British Intelligence set up the Huawei Cyber Security Evaluation Cell near Banbury as part of its National Cyber Security Centre with a specific remit to quantify the nature and scope of the threat. In late 2018 HCSEC stripped back networking gear and millions of lines of code to assess the extent to which Huawei afforded Beijing ‘Trojan horse’ industrial and military espionage and other ‘command’ capabilities.  Its findings were deeply concerning to London not least because Huawei tried to mask the real source codes from the British. Consequently, the head of MI6 warned against any 4G and 5G nework reliance on Huawei.  The EU and Britain’s other Five Eyes allies, such as Australia, and New Zealand are beginning to join the Americans to warn of the threat posed by Huawei, although the British Government has yet to divest itself of much of the investment it has already made in Huawei technology.

So why does this all matter? Now, it would be easy to suggest that this is some form of American ‘dog in a manger’ warning not dissimilar to the ‘reds under the bed’ hysteria that swept the US during the 1960s. The evidence suggests otherwise. Much of my work of late has been focused on pioneering the concept of 5D warfare – the planned and systematic application of disinformation, deception, destabilisation, disruption and implied destruction against open societies by the strategic autocracies, most notably China and Russia.  Much of Europe is making such warfare plausible by its refusal to consider the worst-case and the dangerous interaction that a fusion of strategy, capability and technology affords adversaries. In other words, too many Western European states simply refused to believe the post-Cold War peace is over and that, like it or not, Europeans must again face strategic competition red in tooth and claw.

Worse, the determined European focus on the cheap and the short-term is creating the conditions for an externally-driven digital diktat.  And, it may be that the Silk Road policy has already achieved its strategic goal by fracturing European political solidarity and defence cohesion as countries desperate for Chinese investment effectively sell their strategic soul in some form of latter day Faustian pact. President Macron this week implicitly warned the Italians about being naive in their dealings with China, even as President Xi was about to visit France.

If the West, in general, or more specifically Europe, is to avoid waking up one day to find itself facing a digital Dreadnought against which it has no defence far more digital realism is needed. General Jones recommends a series of actions to prevent Chinese 5G digital dominance built on awareness-raising and systems-hardening. Crucially, Jones calls on the US and its allies to halt work with Huawei and use “alternate companies” whilst “technical standards be designed to withstand cyber attacks. He also calls on the US to establish a “…long-term national spectrum strategy” that confirms federal control over all aspects of 5G and its application, as well as the streamlining of US federal procurement practices that build cost into bids for 5G development work that Huawei simply does not have to consider.

General Jones also highlights a fundamental flaw in the West’s privatisation of structural security technology and China’s one-way exploitation of it. There are some emerging technologies that are of such profound capability that they must be prescribed for fear they will be instrumentalised against the West and its peoples.

China’s Silk Road policy is an unashamed attempt to compete with the West and extend its influence. On the face of it there is nothing wrong in that. A peaceful China trading assertively but fairly is to be welcomed. However, Beijing is also in the business of strategic dominance. The invisible silk strings that run alongside the Silk Road combine debt dependency with aggressive cyber and espionage that is far more dangerous than some mutually-beneficial trade agreement. There is, of course, one easy test to which China could subject itself if it wished to demonstrate at a stroke that the fears of General Jones and others are ill-founded. It could open up its market to Huawei’s competitors, show a willingness to purchase significant parts of its own burgeoning 5G network from American and other contractors, and cede control of Huawei’s source codes to its customers thus making it impossible for Beijing to manipulate to advantage. Unlikely.