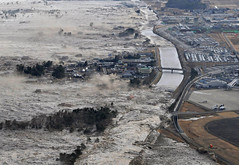 One basic role of international financial markets is to share risks across economies. For instance, investors swap the equity of firms at home for those abroad in order to diversify away from sources of loss that are unique to the domestic economy. In an ideal world of complete risk-sharing, domestic investors would bear such a loss only to the extent of their share of world wealth (“CAPM”).

Thus, a small economy would lay off on the rest of the world almost all risk that is unique to it. Natural disasters pose such a risk. In theory, financial markets might spread their risk around the world to approach the ideal.

However, the reality is different.

In this paper, we use data compiled by Munich Re, a major reinsurer, on the largest natural catastrophes. These give us estimates on the monetary value of the direct losses and the fraction covered by insurance. We then search balance of payments data to identify related receipts of reinsurance payments from the rest of the world. This method identifies for the first time the cross-border flow of reinsurance payments to 88 economies that experienced insured disasters in the 1985–2017 period. Using the data, we decompose international risk-sharing into the portion of losses insured and the portion of insurance that is internationally re-insured.

The lack of international risk-sharing against the background of low insurance coverage poses profound questions about the role of government. The practical alternative to ex ante insurance, however organised, seems to be demand for government spending to serve as ex post insurance. Indeed, the trend in both Japan and the United States looks to be toward greater spending in relation to disaster losses over time.

The difficulty is the empirical observation that those advanced economies which enjoy less international risk-sharing also enjoy less fiscal space. Thus, the realization of a disaster risks ratcheting up already high public debt levels. In this manner, disaster risk can morph into financial risk.  Bond holders should insist that the government should implement policies to identify and better-share disaster risks. Large-scale natural disasters, including those which are increasingly affected by climate change, tend to require the central government to provide an implicit backstop for insurers or local governments and to function essentially as ex post de facto insurer.

This article was first published by Econbrowser on September 5, 2019.