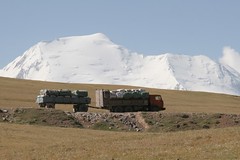 The New Silk Road has become one of the hottest issues on the international agenda since China launched its Belt and Road Initiative in 2013. A veritable plethora of books have also been published, including two celebrated ones by British historian Peter Frankopan.

But one little-known point is that Japan was actually ahead of China in developing the romantic notion of the 'Silk Road' into a coherent relationship between East Asia and Central Asia. In this regard, we are very fortunate to have a new book, "Japan and the New Silk Road: diplomacy, development, and connectivity" by Nikolay Murashkin.

Murashkin's book showcases Japan's diplomatic, financial, and resource activities in Central Asia since the end of the Cold War, including the first detailed account of Japan’s pivotal role in infrastructure finance in the region. He focuses principally on Kazakhstan and Uzbekistan, but also Kyrgyzstan, Tajikistan and Turkmenistan, which all became independent in 1991, following the dissolution of the Soviet Union. The three latter countries have suffered from internal instability and poor governance, and so have been less prominent in Japanese foreign policy calculations.

Murashkin argues that although Central Asia does not figure in Japanese foreign policy calculations as prominently as does Southeast Asia, successive Japanese governments have treated the Silk Road quite seriously since the 1990s, and that it has been an area of significant interest to Japanese business. Indeed, he argues that Japan was the first major power outside post-Soviet Central Asia to articulate a dedicated Silk Road diplomacy, and before the United States and China. And it was also the first to provide important financial aid.

Japan’s human ties with Central Asia have also been strong, as from 1992-2017 it sent 2587 specialists to the region, and trained 9668 interns from Central Asia, many of whom went on to hold high-ranking government offices. And Japan’s efforts with Central Asia were not just bilateral. It also promoted multilateral projects like the Central Asia Regional Economic Cooperation Programme, established in 1997 by the Asian Development Bank.


Why should Central Asia figure so prominently in Japan’s international agenda?

Murashkin argues that “its significance is conditioned by Central Asia’s paramount importance to Eurasian security and its abundant natural resources, Tokyo’s increasingly proactive role in Asian affairs, and its profound involvement in financial aid programmes”. The mercantile and aid facets of Japan’s policy towards Central Asia are not the only facets, despite their relative dominance. This is evident from Japan’s security involvement in Afghanistan (2001-9) and to a lesser extent Tajikistan.

Murashkin also grapples with interactions in the region between Japan and China. He argues that Japan’s infrastructure finance featured both cooperative and competitive postures towards China, especially within multilateral development banks such as the Asian Development Bank.

Interestingly, Murashkin argues that Chinese President Xi Jinping’s grand design for the Belt and Road Initiative exhibited several commonalities with Japan’s earlier New Silk Road programme. He also remarks that Central Asian publics and elites tend to have a consistently positive attitude toward Japan, as well as a shared concern over China.

Overall, “Japan and the New Silk Road” makes a very important and unique contribution to the literature on the New Silk Road and Central Asia. It should be required reading for students, scholars, officials and business people working in the area.