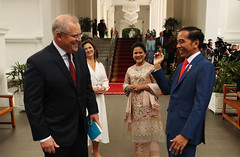 Australia, in search of great and powerful friends

For a people who like to think of themselves as a hardy lot,
Australians’ perseverance in diplomacy will be tested yet, writes John West.
Australia is a nation in search of powerful friends. This was evident in the lavish welcome that Indonesian President Joko Widodo (“Jokowi”) was accorded on his recent visit.

At one level, Australia’s courting of Indonesia could seem astonishing. Indonesia is a fragile democracy, with a poor human rights record. About 60% of its population lives on less than $5.50 a day. It is not committed to open trade and investment. Islamist fundamentalism presents an ongoing challenge. And the two countries have long had a troubled relationship.

So, the signing of the Indonesia-Australia Comprehensive Economic Partnership Agreement (IA-CEPA) was the visit’s high point in Australia’s efforts to develop a real friendship with the increasingly powerful Indonesia.

Australia’s security and prosperity has always depended on powerful friends – from the United Kingdom for the first 150 years of European settlement to the United States since the Second World War.

But Australia’s security environment has changed dramatically in recent years. Australia banked on a benign Beijing as a source of prosperity, and a strategy that seemed to have delivered a boon. However, reports of Chinese interference in Australian politics and society suggest that Beijing would like to use Australia’s economic dependence as a source of political leverage.

And China’s apparent disrespect for the rules-based international order, notably in the South China Sea, highlights the gulf in values between the two sides. China has been quick to take offence at actions which Australia argues are to defend its national interests, leaving Australia now in its fourth year of official estrangement from China, with barely a senior bilateral visit in either direction, and no obvious prospect of one occurring this year.

As to the US, Donald Trump’s presidency seems to have accelerated a drift such that the US is now perceived as a less reliable security partner. Thus, Australia must hedge its bets by courting other powerful friends.

Aside from Indonesia, India has been everyone’s favourite. Two years ago, the government commissioned report, An India Economic Strategy to 2035, written by former top Australian diplomat Peter Varghese, identified ten sectors in an evolving Indian market where Australia has competitive advantages. It also focused on ten states, especially those five states which produce about 70% of India’s exports.

Varghese did not pretend that implementing an India economic strategy would be easy. As he put it, “India marches to its own tune – it is not the next China”.

Moreover, in just two years since the release of the Varghese’s report, the situation in India has become problematic. India’s economy has since turned down, and it is currently growing by 5% at best, and less than China, with analysts such as Harvard’s Arvind Subramanian arguing that India’s official data has always overstated actual growth rates, besides.

India’s commitment to open trade and investment has always been weak, despite its impressive reforms since the early 1990s. This was further confirmed in late 2019 by India’s last-minute withdrawal from the Regional Comprehensive Economic Partnership, a trade agreement between the Association of Southeast Asian Nations and regional partners, including Australia.

India’s democratic credentials have also suffered a blow, seeing the country drop ten places to rank 51st in the 2019 Economist Intelligence Unit’s Democracy Index. Despite India’s mantra of being the world’s most populous democracy, it now sits in the middle of the flawed democracies group, well below the full democracies. The main reason was the erosion of civil liberties, as New Delhi stripped the Jammu and Kashmir state of its special status. Critics have also accused India’s current Bharatiya Janata Party government of promoting a pro-Hindu agenda, involving discrimination against its large Muslim population, particularly with the recent introduction of the Citizenship Amendment Act, and undermining the idea of India as a secular society.

Australia faces a daunting task to court more powerful friends, be it Indonesia or India, yet the public must be willing to persevere for the sake of future security and prosperity. At the same time, Australia should not give up on the US. Future US presidents may see greater value in its long-standing allies.

Just as Australia must find a way to work more effectively with China. Already, Australia has the most China-dependent economy out of the G20 group – and it is difficult to foresee an Australian future in which China does not play a major role.

This article was first published by the "Interpreter" of the Lowy Institute.