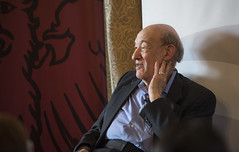 Vogel started writing this book around 2010-2012, a time when China/Japan relations were very bad, when less than ten percent of each population had positive feelings towards the other. He believes that it’s important for both sides to see how their history is perceived by an outside objective observer.

As Vogel emphasises, these two countries have been closely intertwined for over 1500 years through economic, cultural, and political connections. “No countries can compare with China and Japan in terms of the length of their historical contact”, wrote Vogel. And one of the Vogel’s interesting themes is how they have learnt so much from each other — something which both sides are reluctant to concede.

The first period of learning was from the year 600 until 838, during China’s Sui and Tang dynasties, when Japan sent missions to China to learn about Buddhism, Confucianism, government administration, written language, architecture, and urban planning. This still forms the basis of Japanese culture to this very day.

Following Japan’s victory in the first Sino-Japanese war in 1895, thousands of Chinese students travelled to Japan. Ironically, they would learn about Western ideas like Marxism, communism, and socialism from Japan. Among the many Chinese students were Zhou Enlai (Chinese premier under Mao Zedong), Sun Yat Sen (the first president of the Republic of China) and most of the military leaders of the Chinese Nationalist Party.

In 1978, when paramount Chinese leader, Deng Xiaoping, visited Japan, he said “We are a backward country and we need to learn from Japan.” His visits to industrial sites like Nippon Steel, Nissan, and Panasonic were met with a strong Japanese desire to help China, and a period of massive government assistance, investment, trade, and technology transfer followed. The Japanese government also made multiple apologies for its actions during World War II.

Vogel argues this “golden era” of China/Japan relations would crumble following the Tiananmen Square incident. The student movement shook the Communist Party. Deng was worried that China might fall apart, like the USSR and Eastern Europe. For Deng, the answer was to promote nationalism through “patriotic education.” And nothing had more resonance than stories of the sufferings of the Chinese people at the hands of the Japanese during the second Sino-Japanese War of 1937-45.

In contrast to the Germans and French, the Chinese and Japanese did not have an early opportunity to work together and achieve post-war reconciliation. This was because the US restricted Japan’s trading relations with China in the context of the Cold War, wrote Vogel.

Anti-Japanese sentiments were always in the background during China’s rise to regional leadership. Some milestones in this rise were the magnificent 2008 Beijing Olympic Games, the global financial crisis which discredited Western capitalism, and the 2010 declaration by the World Bank that the size of the Chinese economy had overtaken Japan’s. China then began to take a much harder line against Japan, notably in the dispute over the Senkaku/Diaoyu Islands.

It was not until 2014, two years after the election of Japanese Prime Minister Shinzo Abe, that he and Chinese President Xi Jinping would hold formal talks. Tensions had become so great that there was a risk of a collision. China was also suffering from a decline in Japanese business investment. China also decided that better relations are a way to pull Japan slightly away from the US, even though Japan would maintain its security relationship with the US.

Vogel sees great potential for continued improvement in China/Japan relations, even if they don’t become friends. Both sides share a very deep cultural base which can foster mutual understanding. And Chinese attitudes towards Japan have improved. But while there are now large flows of trade and investment, tourists, and students between the two countries, there is a great need for more contact between senior officials and leaders to avoid problems. Moreover, Vogel argues that Japanese textbooks should have a fuller explanation of the horrors the Sino-Japanese war.

While Vogel’s recommended stronger contacts and mutual understanding can certainly be helpful, it seems equally likely that the relationship will continue to be affected by domestic politics. For example, China’s authoritarian state will undoubtedly face more economic and social challenges in the future, and could again resort to greater nationalism (and anti-Japanese propaganda) to maintain support. A Chinese takeover of Taiwan, a close friend of Japan, would test China/Japan relations.

It also seems likely that the US will one day weaken its commitment to its security alliance with Japan, leaving Japan exposed and with little choice but to acquire nuclear weapons, thereby destabilising regional relations. And Japan could again descend into political instability with a revolving door of prime ministers, leaving it unable to effectively manage the increasingly complex relations with its gigantic neighbour.

North East Asia is still a long way from seeing the end of history.

This article was first published by Australian Institute of International Affairs on 3 February 2020.