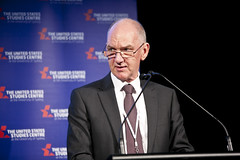 John West's review of Allan Gyngell's ‘Fear of abandonment’ was first published by the DEVPOLICY BLOG, of the Australia National University.
Allan Gyngell’s Fear of abandonment is a masterpiece on the history of Australia’s foreign policy. The most important storyline is Australia’s journey from being a mere dominion of mother Britain to increasingly shaping its own new destiny in the burgeoning Indo-Pacific Century.

Most readers will be surprised to learn that Australia only reluctantly assumed responsibility for its foreign policy in 1942, more than 40 years after federation, when the Australian Parliament ratified the British Statute of Westminster of 1931, long after other dominions like Canada and South Africa were brave enough to do so. According to Gyngell, “Australians thought of themselves as much a part of the British Empire as residents of London or Manchester. They were children of the mother country.”

But Australia was not totally absent from foreign affairs prior to 1942. Britain transferred ownership of the colony of Papua to Australia in 1906. The League of Nations granted Australia control over German New Guinea after World War 1. And Nauru was transferred to joint control by the United Kingdom, Australia and New Zealand. Thus, newly-independent Australia became a colonial power itself.

Australia’s pivot to the US

After World War 2, the UK was a greatly diminished power, and, with the progressive loss of its Asian colonies, the US became the predominant power in the Pacific. As Australia’s external affairs minister, Percy Spender, noted in 1950, there had been “a shift in the gravity of world affairs… from the Atlantic to the Pacific.” In light of Australia’s ongoing “fear of abandonment”, a constant preoccupation for Australian policy makers was how to keep the US engaged in the Pacific, writes Gyngell.

The Australian government was very keen to enter into a security pact with the US, and eventually did so in the form of the 1951 ANZUS Treaty. This involved some costs, or “insurance premiums” to pay, according to Gyngell. The US held Australia back from recognising communist China after Mao’s victory in the Chinese Civil War. And Australia’s involvement in the Korean, Vietnamese, and future wars were in order to pay the insurance premium on the ANZUS alliance.

International economic relations were a major post-war issue. “Coming out of [World War 2], the Australian economy was characterised by preferential trade with Britain, which took around half the country’s exports, import quotas, high tariffs, and a currency tied to the British pound and managed by the government”, according to Gyngell.

Australia’s international economic relations would soon been transformed through a switch to non-discriminatory and multilateral trade through the GATT/WTO. And in more recent years, as the multilateral trading system seems to have ground to a halt, Australia has been very active in securing bilateral free trade agreements with China, Japan and Korea, and in keeping the Trans-Pacific Partnership alive in cooperation with Japan.

A major post-war achievement was building a substantial economic relationship with Japan, argues Gyngell. Australia was also an early leader in development cooperation in Asia, notably through its initiative to create the Colombo Plan in 1950. Over the years, its membership expanded to include most Asian countries, along with Fiji (1972) and Papua New Guinea (1973).

Tending to the South Pacific

The countries of the South Pacific, with their fragile politics, have been a constant foreign policy preoccupation for Australian governments. Gyngell writes that Prime Minister Paul Keating assessed that he spent more time dealing with the “complex, psychologically sensitive relationship” with Papua New Guinea than with any other relationship, apart from Indonesia.

Indeed, Gyngell recounts the difficulty that every Australian government has confronted in dealing with Papua New Guinea, “a democracy with its own sometimes impenetrable logic”, and the major recipient of Australia’s foreign aid. “Each new government would seek ways of differentiating itself from the problems of its predecessors but would gradually accumulate its own set of problems”, according to Gyngell.

Elsewhere, former Foreign Minister Alexander Downer is quoted as saying that “foreigners do not have answers for the deep-seated problems afflicting Solomon Islands”, a comment of lasting relevance throughout the Pacific, and notably so in Fiji with its political instability. But the Pacific became a region of greater challenges as a growing transit route for drugs and place for money laundering, as well as a theatre for outside powers, such as China and Taiwan, to compete for regional influence.

Despite Australia’s numerous foreign policy successes, the new Labor government of Gough Whitlam inherited much unfinished business when it came to power in 1972, according to Gyngell. It established diplomatic relations with communist China, abolished the last remnants of the White Australia policy, and disengaged from the Vietnam War. Under Whitlam’s leadership, Papua New Guinea was granted independence, without being sufficiently prepared, as a new country, for the immense challenges involved.

Although it would be successive Labor governments which demonstrated the greatest leadership for Australia’s engagement with Asia, between April 1975 and October 1980 Australia accepted nearly 42,000 Indochinese refugees, the highest number per capita of any country of asylum except Hong Kong, under the Liberal government of Malcolm Fraser (1975-83).

Gyngell recounts that Hawke was the driving force behind the creation of the APEC forum, with the first (Ministerial) meeting being held in Canberra in November 1989. Keating convinced US President Clinton to hold the first APEC leaders’ meeting in 1993, and then convinced Indonesian President Suharto to do so in 1994, thereby regularising this annual meeting, which was most recently hosted by Papua New Guinea in 2018.

Kevin Rudd played a key role in the development of the East Asia Summit. And Rudd was also the driving force behind the transformation of the G20 into an annual summit. While global in focus, the G20 does include all of Asia’s major economies, namely China, India, Indonesia, Japan, and Korea, along with Australia.

As Australia navigates its way towards an Indo-Pacific century, it faces arguably the most complex point in the history of its foreign relations. In particular, four relationships stand out in Gyngell’s narrative as being at least as problematic as they have ever been.

Since the fading of Britain as an Asian power, Australia has always worked to maintain America’s interest in the region. And today, with the rise of China and the unpredictability of Trump’s America, this is still a major worry for Australia. However, Gyngell reminds us that there may be nothing new in this when he writes “In 1992, following the end of the Cold War, the government was already concerned that the US military presence in the region will decline”.

Managing relations with the Pacific

Australia has been caught seemingly flat-footed by China’s initiative to deepen relationships and finance infrastructure in the Pacific. The government’s very recent efforts, together with the US and Japan, to offer new financing to Pacific neighbours is welcome, even though it is basically an effort to compete with China. Although it sounds like the same old song, we can only hope that Prime Minister Morrison was sincere when he said ‘It’s time to open, I believe a new chapter in relations with our Pacific family. One based on respect, equality and openness.’

Ups and downs with Indonesia

Paul Keating once said that there is “no country is more important to Australia than Indonesia”. And with this country being the world’s fourth most populous country, having the world’s largest Muslim population, and being Australia’s closest large neighbour, Keating’s assessment may well be true.

But Australia’s relationship with Indonesia has had many ups and downs, with many problems disturbing the relationship, for example Australia’s role in East Timor’s independence; refugees from Afghanistan, Iraq, Iran and Pakistan travelling through Indonesia to seek asylum in Australia; death sentences and imprisonment for Australian drug smugglers; disputes over live cattle exports; and revelations that the personal mobile phones of former President Susilo Bambang Yudhoyono and his wife were wiretapped by Australian intelligence.

Since the publication of Gyngell’s book, Australia’s relations with Indonesia have tripped up yet again with Prime Minister Scott Morrison’s announcement that Australia would recognise West Jerusalem as the capital of Israel. The Indonesian government has thus put on ice the signing Indonesia-Australia Comprehensive Economic Partnership Agreement.

Australia’s relationship with China has also had its share of ups and downs. During the 1950s, well before Australia recognised Mao’s communist regime, China was the biggest customer for Australia’s wheat exports. The 1989 Tiananmen Square incident resulted in a temporary freeze in relations, as it did with most advanced countries.

Economic relations between Australia would boom, especially following China’s membership of the World Trade Organization in 2001, such that China is now Australia’s most important trading partner, and source of international students and tourists. It has been estimated that Australia is now the most China-dependent G20 country.

In recent years, during the presidency of Xi Jinping there has been a substantial renewal of tensions in light of concerns about Chinese investments and business interests in Australia, and in view of evidence of Chinese government interference in Australian politics and society.

In an interview last year, Gyngell was quoted as saying “…China is big and wants to have influence and is finding its voice in the world.” But on Chinese influence he says Australia has the tools to protect its democratic institutions. “Essentially it’s our problem and the solution lies in our own hands.” (1)

In the same interview, Gyngell concluded “I can’t think of a more challenging time to be a policymaker in Australia.” And there may be no better preparation for a maker of foreign policy than the history outlined in Fear of abandonment, which is a veritable tour de force.

- Allan Gyngell. Fear of Abandonment: Australia in the World since 1942