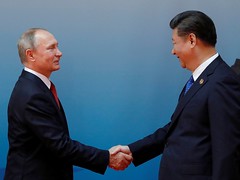 At the end of World War 2, the European powers of the U.K., France and the Netherlands, were broken, and could no longer maintain their colonial systems. Although some would try to hold on, decolonization was inevitable. So for the first time in at least a hundred years, countries like India, Vietnam and Indonesia could determine their own fate, although Korea and Vietnam would be dragged into some of the hot conflicts between capitalism and communism.

Following Japan’s surrender, the US took charge of the refashioning this country into a long-term auxiliary. It was clear that the US would need Japan as an Asian ally after the Chinese Civil War and the Korean War. Japan would then become Asia's first miracle economy, and a beacon for an Asian Century, as it benefited from US assistance for post-War reconstruction, and preferential access to US markets for its export-led development.

Both South Korea and Taiwan were also front-line states in the Cold War, which similarly benefited from significant US assistance. For its part, Hong Kong became a critical listening post against Communist China, while US presence in Southeast Asia provided both security and economic opportunity for Singapore.

The big surprise of the Cold War was US President Nixon's courting of Mao's China as a hedge against the USSR, which was seen as the biggest threat to both the US and China. China would become a friend of the US and Japan during the latter part of the Cold War. A highlight of this period would be Deng Xiaoping's 1979 visit to the US where he sought America's assistance for China's economic modernization (Deng had made a similar visit to Japan in 1978).

Deng told his advisors “Whoever work with the Americans will gain, while those who try to oppose them will fail”. Deng believed that working the Americans provided protection (against the USSR) and economic opportunity. The Americans duly assisted through loans, technology transfers and market access.

Oh how things have changed beyond the chronology this wonderful book. Following the Tiananmen Square incident, China would launch a patriotic education campaign, with Japan portrayed as the biggest bogeyman in light of the atrocities it committed in China during World War 2. And with the arrival of Xi Jinping at his nation's leadership, China would seek to push the US out of East Asia, and challenge the liberal rules-based international order, from which it benefited so much.

More recently, the arrival of Donald Trump at the leadership of the US is shaking up things even further in East Asia, notably through his trade war with China. And with both China and Japan deeply concerned about the US's position in Asia, the frosty relations between Japan and China have been warming up.

Patience Johnson's wonderful quote -- “In politics no permanent friends, no permanent enemies but permanent interest” -- seems perfect to describe developments in East Asia over the past seventy years.