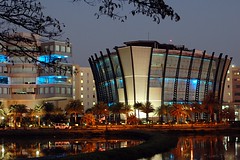 The New Delhi-based The Kootneeti and the Asian Century Institute have agreed to join forces as partners to maximize their synergies and impact.
As a first step in this partnership, the two organizations will share research publications and articles across a broad range of hot topics of relevance to the emerging Asian Century. They will also promote each others events/book releases to their respective readerships, notably scholars, policymakers and members of civil society.

"As the world is increasingly focusing on the Indo-Pacific as the locus of global economic dynamism, the Asian Century Institute is proud to cooperate with India-based, The Kootneeti as one of its International Synergy Partners", said John West, Executive Director, Asian Century Institute. "This will enable us to better touch Indian audiences, and learn from the exciting developments of India, which is now the world's fastest growing large economy."

“In a short span of time, to be collaborating with a well-researched and prestigious organization like the Asian Century Institute is taken as an achievement among the Editorial board members of The Kootneeti”, said Amrita Dhillon, Founder & Director, The Kootneeti. "This will add wings to the journey of The Kootneeti as first of its kind of Indian platforms."

The Asian Century Institute (ACI) conducts research and analysis, and participates in policy dialogues to foster a better understanding of the opportunities and challenges of the Asian Century. The ACI was launched in September 2012 by Executive Director John West and Technical Director Jean-Charles Edel. John has had a long career as an international economist, with major stints at the Australian Treasury, Organisation for Economic Cooperation and Development, and the Asian Development Bank Institute. Jean-Charles is also Executive Director of "e-creatif", an enterprise that provides webmaster, webdesigner and webmarketing services.