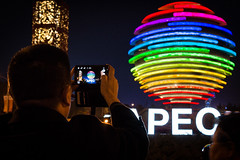 Global value chains in the Asia-Pacific

GVCs are a dominant feature of the economic landscape of the Asia-Pacific, as I highlight in my recent book on the Asian Century. Perhaps the most celebrated case is that of the iPhone, which was designed and conceived in California, whose high-tech components come from Japan, Korea, Taiwan, Germany and elsewhere, and which is assembled in China by two companies from Chinese Taipei, Foxconn and Pegatron.

But there are many other examples like clothing garments which are often designed in European capitals, but which are cut, sewn and trimmed in China, Bangladesh, Cambodia, and Vietnam. In the services sector, the Philippines plays an important role in business process outsourcing GVCs, especially for call centres.

GVCs are driven by multinational enterprises (MNEs) which have invested and established production facilities in Asia's emerging economies, notably China, Malaysia and Thailand. And participation in these GVCs has boosted economic growth, poverty reduction, and prosperity in these economies, thereby providing a fast track to development.

But a close examination of Asia's GVCs indicates that there is much that Asian governments could do to get better value out of GVCs. Despite its large and youthful workforce, the Philippines is barely present in manufacturing GVCs. While Malaysia and Thailand are struggling to transition from middle- to high-income countries, and China is very conscious of the steep challenge of upgrading its economy, as evident in its decision to launch the “Made in China 2025” plan.

Since GVC participation by emerging economies is mainly driven by foreign direct investment (FDI) from MNEs, it is critical to foster an investment-friendly ecosystem. This means open trade and investment policies, as well good transport, logistics and other infrastructure, and minimal restrictions on doing business. And yet, APEC economies like the Philippines, China, Indonesia, and Malaysia have enormous barriers to FDI, as do other neighbouring economies like Myanmar, India, and Lao PDR, according to the OECD. This prevents them from exploiting many of the potential benefits of GVCs.

Multilateral trade and investment liberalisation offers a path towards greater participation in GVCs. And the recently agreed TPP-11 (Comprehensive and Progressive Agreement for Trans-Pacific Partnership) is a very important initiative in this regard. It covers a host of issues which are relevant to GVCs like investment, services, intellectual property, and cross-border data flows for service suppliers and investors. But it only includes a small group of countries from the Asia-Pacific, and must be expanded to include other economies, still on the basis of the agreement's high standards.

In contrast, the Regional Comprehensive Economic Partnership (RCEP), the other major trade negotiation underway in the region, is more limited in scope. It does not focus sufficiently on issues like services, investment and intellectual property. It also has more limited ambitions to advance trade and investment liberalisation. Moreover, it is far from clear if RCEP will ever be concluded, as deadlines get extended year after year.

The TPP-11 and RCEP have the potential to become important building blocks for APEC’s vision of a Free Trade Area of the Asia-Pacific (FTAAP). But a higher level of ambition and a greater sense of urgency are required for these multilateral trade and investment initiatives to enable Asia’s emerging economies to extract more value out of the region’s GVCs.

Logistics and ease of doing business for GVCs

The great challenges in the area of trade logistics facing countries like Papua New Guinea, the Philippines, Indonesia, and Thailand are evident from the World Bank’s Logistics Performance Index. Improving logistics in APEC’s emerging economies is critical for enabling stronger participation in GVCs. The World Bank, Asian Development Bank and the new Asian Infrastructure Investment Bank, along with bilateral donors, are providing important assistance and capacity building to improve Asia’s logistics infrastructure. And while there is also potential for public–private partnerships, it is of most critical importance to develop and promote more seriously pipelines of bankable and investment-ready infrastructure project pipelines, and to improve taxation collection efforts to generate local revenue for infrastructure investment.

When local businesses participate in GVCs through working with MNEs, the domestic economy can benefit handsomely through economic growth, job creation, and technology and knowledge transfer. And yet as the World Bank’s Doing Business project highlights, the Philippines, Papua New Guinea, China, Indonesia, and Brunei Darussalam suffer from regulatory environments which greatly inhibit the starting and operations of local firms. APEC’s recent initiatives to improve the ease of doing business could generate great benefits for micro, small and medium enterprises which have much potential to participate in the region’s GVCs.

Despite the manifest benefits of emerging Asia’s participation in GVCs, for the most part China and the ASEAN economies remain in a subordinate role in these GVCs, which are led by MNEs from advanced countries. China and ASEAN mostly undertake low value-added activities, such as assembling electronics and motor vehicles, and sewing garments. And even though China has made some progress in climbing Asia’s GVCs, especially in the area of mobile telephony, Chinese companies are still reliant on suppliers from advanced companies for much high-tech componentry.

Asia’s GVC successes, such as they are, have been mainly in the manufacturing sector. In contrast, the services sector in most of Asia’s emerging economies is bogged down in traditional services with low productivity. Even in Japan and South Korea, productivity in the services sector is only half that of the manufacturing sector. Outside the services dynamos of Hong Kong and Singapore, the only real success story in services GVCs in East Asia is that of the Philippines, and even here, much of the focus is on low value-added activities, such as call centers.

Most Asian economies have an immense structural reform agenda to climb Asia’s GVCs and “get better value out of the region’s GVCs” by becoming GVC leaders, rather than subordinate followers. This means substantially upgrading economic, business and technological sophistication through investments in human capital, fostering innovation and creativity, improving infrastructure and connectivity, reforming corporate governance, tackling corruption, capturing the potential of the digital economy, to mention just a few. This is the only way that emerging Asian economies can become GVC leaders.

But the unfortunate reality is that most Asian countries—notably regional leaders such as Japan, South Korea and China—have been slow to respond to the region’s structural reform imperative. According to the latest annual survey of the Pacific Economic Cooperation Council (PECC), failure to implement structural reforms is one of the top five risks to the region’s growth.

The advent of digitalisation could have major impacts on the region's GVCs and provide governments with major policy challenges, as it sweeps through our economies, societies and politics. The digital economy has the potential to improve productivity, lower production costs, and raise demand. But as repetitive and routine tasks are replaced by machines, automation, and robots, governments could be tempted to implement self-defeating protectionism. What is necessary is for governments to invest more seriously in education, skills and training, and lifelong learning, both to optimise the benefits of digitalisation, and to enable displaced workers to find new employment.

More fundamentally, for those economies that have based their attractiveness on their low-cost labour, digitalisation may pose a strategic threat. As digital technologies and the 4th Industrial Revolution reduces costs in advanced economies, there is less incentive to offshore production to distant low-wage countries. Indeed, there has been mounting evidence that in recent years GVCs have been contracting with more MNEs ‘onshoring’ production. This highlights the importance and urgency of the structural reform agenda indicated above. Looking ahead, Asia’s emerging economies must aim to base their development on smart labour and advanced technology rather than just cheap labour.

APEC's lofty vision of an Asia-Pacific with free and open trade and investment and a FTAAP, supported by structural reform and capacity building, was established many years ago. But as I argue in this article, even if the global context may now be fundamentally different, these visions are more relevant than ever in today's economy where GVCs are a crucial factor driving the region's development.

This article by John West was first published in APEC Currents, the newsletter of the Australian APEC Study Centre.