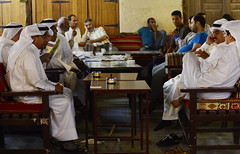 Doha’s deft diplomacy dents the pain from the ongoing Gulf crisis writes Anil Trigunayat.
The blockade enforced on Qatar by Saudi Arabia, the UAE and Bahrain was a disaster waiting to happen.

The last six weeks have probably been the most bizarre and trying in the recent history of the Gulf Cooperation Council (GCC). The challenges in the wider region since the onset of the Arab Spring have mostly kept the world guessing.

On June 5, when things were peaceful, in just a day’s notice and without any specific demands, the enforcing of a blockadeagainst a sovereign neighbour by the bigger and militarily more powerful countries like Saudi Arabia, United Arab Emirates and Bahrain, was a disaster waiting to happen. Conspiracy theories with some legitimacy have tried to explain the sudden spurt in hostility.

US President Donald Trump’s Riyadh visit and the Arabs’ exceptional hospitality went beyond the already rich menu of goodies. Saudi Arabia’s hostility towards Iran and the irresponsible and inane mixed messaging aimed at the perpetrators and funders of terrorism, obliquely and directly implicating Qatar as the pariah, acted as a major catalyst. This fanned old prejudices and the so-called Anti Terrorism Quartet (ATQ) comprising Saudi Arabia, UAE, Bahrain and Egypt broke diplomatic relations and promulgated an economic and political blockade against Qatar, unprecedented in times of peace.

In the bargain, the fight against terrorism and ISIS was adversely impacted since the cornered Qatar had to survive this ill-conceived move. Moreover, Trump’s efforts to create a Sunni alliance against Iran were negated even before it could be initiated. It also demonstrated the utterly discordant incoherence between Trump, his State Department and the Pentagon, notwithstanding that Qatar hosts the largest US airbase at Al Udeid with over 10,000 military personnel. This is an important factor, despite Trump’s claims that ten other countries were willing to host the base at their expense even though the US was not considering relocating it. This was probably to put pressure on the Qataris, who might think of it as an indivisible security guarantee for themselves against a military invasion.

Trump spoke to the Qatari Emir and Saudi king and the newly coronated Prince Salman to go slow in fomenting the crisis further. Secretary of State Rex Tillerson undertook the role of peacemaker, calling the Qatari response to the 13 virtually impossible demands reasonable. He secured a memorandum of understanding with Qatar to control the financing of terror as a negotiating tool and be an arbiter to plug any Qatari diversion of funds, which the others found “not good enough” and insisted on near full compliance. Trust deficit on both sides has peaked.

The old dictum that those in glass houses should not throw stones at others is evident in the current scenario. The Saudis themselves have come under the scanner with an accusation in a report by a UK and a US senator for their financing of the extremist groups’ “extremist Wahhabi ideology and ideologues which dwarf that of Qatars” in comparison putting them on the back foot.

The UAE, which has seemed to take a more vitriolic position, was also charged with hacking Qatari social media sites to relay a manufactured criticism of his counterparts and the GCC by Qatari Emir Sheikh Tamim. The ‘fake news’ in the first instance is said to be the causal connection for the extreme sea, air and land blockade. UAE denies it, but pressure is being built to back off. They have already said that they don’t want the closure of Al Jazeera – one of the original 13 conditions. Undoubtedly, Al Jazeera, especially its Arabic version, has been targeted for its reporting that was seen as an interference in a country’s internal affairs, especially by the UAE and Egypt.

The divergent approaches and insinuations emanating from the US further accentuated the rifts in the highly volatile oil-rich region, where the young emirs or princes in their 30s are trying to demonstrate a one-upmanship in the regional and bilateral foreign policy discourse through aggressive posturing. This could only be termed as mutually aggressive decimation. As Nikki Haley said while briefing the Foreign Relations Committee, the US should take the Qatari crisis ‘as the opportunity that it is and hit both sides’, the US would obviously tend to gain from the scenario as an arms deal of over $122 billion only with Saudi Arabia and Qatar were signed. For the Saudi leadership, the sharing of politico-religious supremacy with small but rich Qatar, with its increasing international influence, is out of question. The old order in the Arab world led by Saudi Arabia has to prevail. Support for the Muslim brotherhood and protection to their leadership has been a singular problem between Qatar and Turkey on one side, and Saudi Arabia, UAE , Egypt and Bahrain on the other, in the wake of Arab Spring.

Qatar also allowed the Taliban to open an office in Doha and helped secure the release of five Americans in Afghanistan and elsewhere. Besides, the hosting of Hamas leader Khaled Mashal and several other Islamic leaders like 90-year-old Qardawi remained the bone of contention. Their refuge to various Muslim brotherhood leaders and their role in Libya and Syria have been questioned. Regime change conspiracy charges and interference in internal affairs have been virtually levelled against all countries in the fray by one another.

Qatar’s relations with Iran, especially for Saudi Arabia, is yet another issue, even though UAE, Oman and Kuwait do maintain relations with the Persian state in some way. There are also reports of Iranian investments abound in the UAE. In fact, Qatar jointly owns the largest gas field with Iran. This foreign and economic policy independence of Doha and its riches is probably the key issue that the ATQ wish to tame and subjugate. Hence, one of the most humiliating demands of monitoring the progress on implementation of the promises and undertakings by Qatar, if it were to agree to the extraneous demands per se, would be unacceptable to any sovereign state and hence were rejected.

It is not unjustified that Saudi Arabia and UAE may have some legitimate concerns with regard to Qatar’s outreach. But the sanctions of the kind witnessed have had the exact opposite effect. It led to Qatar becoming closer to Iran and Turkey, who immediately seized the opportunity and provided economic succour to Qataris by airlifting supplies in sufficient quantities. Turkey also expedited the setting up of its base in Doha, that has been in the pipeline for over four years. Turkey terms this as an effort to ensure ‘security and stability’ in the region. One of their demands – to remove the Turkish base – is unlikely to be met. The French, the Germans and the British are all trying to supplement the efforts of Kuwaiti Emir Sheikh al Sabah, to broker a dialogue for the lifting of the blockade.

Meanwhile, Qatari leadership has shown immense maturity by calling for a dialogue while taking diplomatic and legal recourse through approaching the International Court of Justice, International Civil Aviation Organisation, the United Nations High Commissioner for Refugees and the United Nations Security Council. At the same time, the emir has not refrained from sending messages of condolences or felicitations to the Saudi leadership, thus maintaining the decorum. Qatari foreign minister Mohammed bin Abdulrahman Al Thani has been explaining their position and underlining their credentials to remain as partners in the fight against ISIS and international terrorism, which is questioned by the current adversaries. In Doha one finds that a common Qatari will not berate their Emirati or Saudi guests. Qatar refused to evict the nationals of the ATQ as a quid pro quo and rather allowed them the freedom to live, work and move around which provided the requisite moral high ground and global sympathy.

Qatar being a rich country with over $340 billion in reserves and a relative small population can afford to fend off the worst effects of the blockade for a longer time than was expected while enforcing the blockade but there will definitely be an impact, both psychologically and economically. They are trying to diversify their production base, even importing 4000 cattle and cows to shore up the milk supplies. Alternate sources, ports and supplies have been pegged, be it in Oman, Iran, Turkey or India. But it is an untenable situation in the long run as the Qatari Riyal is under stress and the investment rating has been downgraded. Surely it will have an impact on other regional economies too and this mutually assured decimation has to subside at the earliest.

Unfortunately, GCC solidarity has taken a big hit and the external forces have found a niche due to the unprecedented embargo. Indeed a more internalised approach, in the best traditions of the Arabs, through dialogue and discussion could have averted the damage and public humiliation and showdown that will eventually make everyone a loser in the bargain.

The visible impact of the blockade is the spurt in patriotism among the Qataris and overt affection for the Emir Sheikh Tamim bin Hamad Al Thani whose portraits have appeared all over the city – on buildings, cars and public places and the common people support and stand by him. ‘Tamim-Al Majd’, ‘We are all Tamim’ and ‘Tamim the great’ have become buzz words in the country, giving endorsement to the leader that very few deserve or achieve. For the time being both sides remain rooted to their stand, and even if the situation is resolved the hurt and humiliation are unlikely to go away soon.

Anil Trigunayat is the former Indian ambassador to Libya, Jordan and Malta.

This article was first published in the Wire on 20 July 2017.