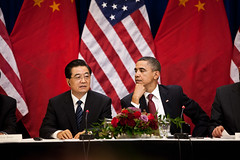 US President Obama's well-intentioned pivot to Asia enjoyed only mixed results, writes John West.
The election of Barack Obama marked a new phase in America’s relationship with Asia, following George Bush’s costly decade of Middle East wars. In a speech in Tokyo in 2009, the first year of his presidency, he billed himself as "America’s first Pacific president" (he was born in Hawaii), promising the nations of Asia "a new era of engagement with the world based on mutual interests and mutual respect."

Obama was very right to focus on Asia. With some 60% of US trade being with the Pacific region, Asian maritime and regional security are vital US interests. And Japan and China are the biggest foreign holders of US Treasury Securities, with Hong Kong, Taiwan and India also being big investors.

Asian Americans, which now make up 6% of the nation's population, are also America's fastest growing and most successful migrant group -- their average household income is some 30 per higher than Americans overall. China, India and Korea account for over half the foreign students in the US, with Vietnam, Taiwan, and Japan also being in the top 10. Japan, China and Korea are among the top 10 source countries for foreign tourists in America. All these factors generate deep human and emotional connections between the US and Asia.

It was perhaps not surprising that President Obama should later decide to deepen his engagement with Asia. It did however catch many Australian observers off-guard when he chose a speech at that nation’s parliament, rather than in the US or an Asian country, in 2011 to announce his “pivot” to Asia.

The US pivot is best seen as an attempt at a longer term deepening of America's engagement with the Asia-Pacific region, in light of the region's growing importance, and in light of the reverberations from the rise of China. On the military side, it was planned that by 2020, the US navy will reposture its forces from today's roughly 50-50% split between the Pacific and the Atlantic to about a 60-40 split between those oceans. In the economic area, the Trans Pacific Partnership (TPP) was the key piece. Obama’s defense secretary Ashton Carter once said that the “TPP is as important to me as another aircraft carrier”. And the US has established strategic dialogues with China, India, Indonesia, Pakistan and virtually all other countries in the region, in addition to its long standing alliances and partnerships with Japan, Korea, Singapore, Thailand, and the Philippines.

Obama's Asia pivot got off to an awkward start. Its initial emphasis was on the military, rather economic or human dimensions. The speech was very pointed at China, on which the region depends economically -- but in which it has little trust politically and militarily. Some argue that Obama's pivot reflects the US desire to "contain" China, and that by exacerbating strategic rivalry, the US has actually provoked China's subsequent assertive behavior, notably in the South China Sea. On a subsequent visit to Asia in 2014, Obama sought to clarify his interest in Asia when he said "Our goal is not to counter China. Our goal is not to contain China. Our goal is to make sure international rules and norms are respected and that includes in the area of international disputes".

Even Obama's use of the term "pivot" was awkward, given that US has long been a Pacific nation -- a region which is of growing economic importance to the US economy, in which it still has over 80,000 troops and substantial military assets, and in which it now has more allies than it ever had before. (The term is obviously the brainchild of a basketball loving President.) But "pivot" does capture the right sense in that under George W. Bush, the American leadership basically forgot Asia, as it got bogged down in Iraq, Afghanistan and the global financial crisis.

President Obama’s pivot to Asia was subject to much criticism. Some argue that it was perceived as being provocative towards China, which is convinced that the US is trying to slow down China’s growth. Others argue that it was all talk and no action. Certainly President Trump’s torpedoing of the TPP has gutted the pivot of arguably its most substantive element. It is certainly regarded as a great disappointment by the other participating countries many of which went to great pains to sell the TPP to domestic stakeholders.

Climate change was one area of successful cooperation between the US and China, culminating in the Paris Agreement on Climate Change. If Trump withdraws the US from this agreement, it would also be a blow to the many Asian countries already suffering from effects of climate change. Obama's reluctance to stand up to Beijing during the early stages of its blatant land-reclamation activities in the South China Sea only emboldened Beijing to continue with its buildup and militarisation of artificial islands, and to take over the Philippines’ Scarborough Shoal. The US’s subsequent freedom of navigation exercises through the South China Sea are a case of “too little, too late”.

US bilateral relations with other Asian countries were a mixture of sweet and sour through the Obama administration. President Obama had bromances with Manmohan Singh and especially Narendra Modi, the two Indian prime ministers who overlapped with his presidency. They had a lot in common, coming from the world’s two largest democracies, and sharing a concern about China’s assertive behaviour. Economic and military cooperation also strengthened greatly Vietnam, a member of the TPP. Washington also lifted its decades-long embargo on selling lethal arms to Vietnam, despite the war history between the two countries. The Obama administration fostered a warm relationship with Myanmar and its de facto leader Aung San Suu Kyi, even though there were great concerns about the country’s appalling treatment of its Rohingya minority. Obama also regularly attended the many summits and meetings organised in the Asia-Pacific, like APEC, East Asia Summit and ASEAN dialogues.

At the same time, Obama oversaw a cooling of relations with a number of countries. In the case of Thailand, the 2014 coup and the failure of the military to restore democracy, together with growing human rights abuses, has led to strained relations with one of America’s closest friends in Asia. Obama had made great efforts to foster warm relations with Malaysia, a moderate Muslim country, for its help in fighting radical Islamic terrorism. In 2014, he even played golf with Malaysian Prime Minister Najib Razak in Hawaii. But the US Justice Department’s lawsuit concerning Malaysia’s corrupt sovereign wealth fund, 1MDB, saw a fading of the friendship. In 2016, Najib travelled to Beijing to sign trade deals reportedly worth $34 billion, and Beijing has also been bailing out the 1MDB mess. After a strengthening in US/Philippines military cooperation under President Aquino, the new Philippine President Rodrigo Duterte has sought to distance his country from the US, following its criticism of human rights abuses in the country’s murderous war against drugs. He even called Obama a “son of a bitch”. Duterte has also travelled to Beijing to receive billions of dollars of trade and aid. Beijing has thus been able to assuage objections to its military buildup in the South China Sea.

Like all of predecessors over the past couple of decades, Obama was unable to put a halt to North Korea’s missile and nuclear arm development. In the past, all measures have been tried, from engagement and dialogue to tough sanctions. Obama’s approach was “strategic patience”, hoping that eventually tough sanctions would deter North Korea. One problem has always been the reluctance of North Korea’s godfather, China to fully implement sanctions and cut of its life support of food and energy.

The big blunder of Obama’s Asian diplomacy was its opposition to the Chinese-led Asian Infrastructure Investment Bank (AIIB). This was initiative was motivated by the US Congress’s delays in approving an increase in the weight of China and other emerging economies in the IMF and World Bank. It was also inspired by China’s feeling that the multilateral international system was still too dominated by the West. In this regard, the US saw it as a competitor for the US-led World Bank and the Japan-led Asian Development Bank. The US pressured all of its friends and allies not to join. But ultimately the UK broke ranks, and was followed by virtually all other advanced and emerging economies. At last count the AIIB had 57 member countries, and in acts of contrition, the World Bank and Asian Development Bank are now cooperating very closely with the AIIB.

Competing with China for Asian friendships is increasingly difficult for the US. The Middle East will also always draw US attentions away from Asia. The Chinese have lots of financial and infrastructure aid to provide, which the US does not do. China also uses trade as an extension of their foreign policy, and is not concerned about ethical issues like corruption and human rights.

Ever since Nixon’s trip to China in 1972, American policy elites had believed that encouraging China’s participation in the global economy and global governance would result in China becoming a responsible stakeholder in the postwar multilateral system, and becoming “more like us”. The Obama administration was also the time when America discovered that democracy, rule of law and human rights were not coming to China any time soon, as the Chinese Communist Party under President Xi Jinping was tightening its grip on power. Moreover, even though China had been a great beneficiary of the postwar order, in tandem with its rise in power, China is intent on challenging the postwar order, and keen pushing America out of Asia.
Tags: asia, obama's asian pivot