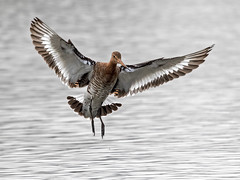 Roger Coombs reports on two children’s books focussing on the lives of the Bar-Tailed Godwit, one of the bird species most critically dependent on continuity of the East- Asian Australasian Flyway.
THE increasing inter-connectedness between Australasia and Asia-Eurasia manifests in numerous – perhaps countless – ways; in economic co-operation via multi-lateral trade agreements and long-term commercial contracts, in cultural and educational exchanges, in political and diplomatic discourse, in defence treaties and alliances, in strategic security arrangements.

Those non-specific categories encompass a host of formal and informal linkages at the political level, at the commercial and institutional level, even at the personal level.

Think the ASEAN-Australia-New Zealand Free Trade Agreement, which came into effect in 2010. Think the range of free trade agreements between Australia and Korea, Australia and Japan, Australia and China. Think the co-operative links between the Australian Federal Police and similar agencies in Indonesia, Malaysia, India, Japan – and even China.

Think the Sydney Symphony Orchestra’s 2014 seven-city tour of China. Think ‘catwalk diplomacy’, the neat descriptor of the gradual infiltration of the Australasian fashion industry by Asian designers and manufacturers. Think the steadily-rising trajectory of Asian languages in schools and university curricula, vectored by tertiary ‘Asia Institutes’ (Melbourne University and the University of NSW are both building dynamic student cohorts in such study centres) and by a rising demand for Asian language competency in workplaces. Think the export of cuisine, think sport, the arts, medicine, science.

Without labouring the point, the capacity of the multi-directional ‘conduits’ of commerce, culture, education, strategic co-operation and so-on is – to mangle a metaphor – expanding exponentially.

But humans are not the only beneficiaries of this climate of criss-cross co-operation. There are other creatures as well which stand to have their life chances lifted. And for some of them at least, mankind, their great enemy, may become their salvation.

Now think ‘birds’ – and most particularly, think ‘migratory birds’, those extraordinary world wanderers who have forever traversed the empty heavens, virtually from pole to pole along ancient flyways embedded deep in their DNA – or in their very souls, to put is less prosaically. But to survive and thrive, migratory birds need access not just to the currents of the sky; they depend also on strips of coastal wetlands, on off-shore islands, on estuarine sanctuaries and lakes and rivers to complete their life-cycles of breeding and feeding. Which is where ‘mankind’ has intervened – usually, in the past, to the birds’ detriment.

Yet in a number of important initiatives, Australasia and Asia-Eurasia have been at the forefront of international efforts to protect those critical heavenly – and earthly – habitats. In 1974, Australia and Japan developed ‘JAMBA’; the Japan-Australia Migratory Bird Agreement, which binds both nations to a series of protocols designed to protect migratory birds’ habitats, to take steps to protect endangered birds and enhance the natural environment on which such birds rely. The equivalent agreement with China – the CAMBA – came into force in 1988, while the ROKAMBA, the matching treaty with the Republic of Korea became effective in 2007. Under those agreements, now effectively a three-way co-operative partnership – more than 50 endangered or threatened bird species are listed for protection.

Other multi-national agreements have also been promulgated for the protection of migratory species; The Bonn Convention on the Conservation of Migratory Species of Wild Animals, the Ramsar Convention on Wetlands, other agreements drafted to protect specific avian species such as albatrosses and petrels, imperilled by deep-ocean fishing operations .

And most pertinently of all, The East-Asian-Australasian Flyway Partnership, which aims to protect and enhance what is perhaps the world’s most important aerial pathway for migratory birds.

Established in 2006, the so-called EAAFP now comprises 22 member nations, and a number of international non-government organisations and business partnerships, all of which are committed to the protection of this crucial – and vast – tract of wildlife habitat. No static organisation, the EAAFP has now convened eight annual conferences and its delegates have attended numerous top-level international conventions on bio-diversity, environmental protection and natural habitat rehabilitation.

In December last year, EAAFP Secretariat CEO Spike Millington was a special guest at the ASEAN-sponsored Convention on Biological Diversity held in Nagoya, at which he was instrumental in the identification of 20 key sites in nine separate countries, all of which are now designated for suitable management under EAAFP guidelines.

Raising public awareness of these various ‘bird-centred’ agreements and partnerships is a continuing challenge – but two novel publications released in Australia last year could prove to be of significant use to EAAFP marketing and media executives.

By co-incidence, two children’s books focussing on the lives of the Bar-Tailed Godwit, one of the bird species most critically dependent on continuity of the East- Asian Australasian Flyway, were released in Australia within six months of one another.

The first of them, Circle, by the acclaimed children’s author and illustrator Jeannie Baker, incorporates a series of beautifully-realised collages – Baker’s unique artistic speciality – to depict the lives of the Bar-Tailed Godwits as they complete their epic avian odyssey from Australia and New Zealand to their Arctic destination. Exquisitely detailed and refined, both in its narrative and in its artistry, the book crafts its critical conservation message in subtle tones and shades, calculated to engage young readers at the time when their awareness of the natural environment is taking shape. First published by Walker Books (UK) Circle seems likely to attract a wide readership – and equally importantly, to win wide approval from environmentally aware parents.

The second of them, simply titled The Godwits, written by former teacher Bruce Pickworth with superb accompanying watercolour illustrations by the gifted artist Dr Lorraine Robertson, imagines the lives of a group of godwits as they fatten up on the shores of a NSW coastal river, preparing for the return leg of their migration; back to their Alaskan breeding grounds. A second narrative strand sketches the life of 13-year-old bird-watcher Gao Wei, who lives on the fringe of the Yellow Sea and who stages a courageous protest against a group of developers who want to build housing units on a vital stop-over point for the birds. While the ‘authorities’ in China may not entirely approve of Wei’s interventionist tactics, there is no doubting his commitment, no question of the moral foundation of his cause, and the two tales come together with a satisfactory result in the end.

Produced by the micro-publisher, Bullawai Books, The Godwits was written with the NSW schools’ curriculum in mind, but its messages and themes are universal.

EAAFP staff and executives might care to evaluate these two books as potential tools in their campaign to raise their organisation’s public profile – and to further enhance an important ‘environmental’ component in the framework of Australasian-Asian-Eurasian integration.