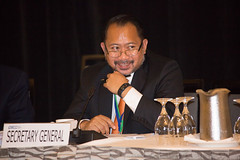 The Asia-Pacific faces risks from slowing trade and rising anti-globalization sentiments says the Pacific Economic Cooperation Council (PECC).
Slowing global trade and rising protectionism are key risks to the continued growth of the Asia-Pacific region as regional leaders gather in Lima for the annual APEC summit. The continued slowdown in global trade and increasing protectionism were the second and sixth highest risks to economic growth according to the poll of 743 regional opinion leaders.

The State of the Region 2016-2017 report of PECC was released today on the sidelines of APEC senior official and ministerial meetings ahead of the summit. This report includes the results of a survey of the regional policy community on key developments and challenges that the Asia-Pacific as a region is facing. The survey panelists were selected based on their expertise and direct involvement or influence on regional policy-making, coming from government, business and civil society.

According to the survey, the top 5 priorities that the APEC Leaders’ should address in Lima were:

“There are numerous competing priorities for Leaders to consider whenever they gather for APEC each year. Apart from the usual top entries that appear in our list of priorities identified through our annual survey such as the Free Trade Area of the Asia-Pacific (FTAAP) and Bogor Goals, the APEC Growth Strategy, it is noteworthy that the rise of anti-globalization and anti-trade ranked so highly, particularly among the advanced economies,” said Amb. Don Campbell, Co-chair of PECC.

It should be noted that the survey was conducted in August-September period when the presidential election campaign was in full swing in the United States with both candidates turning their backs on the Trans-Pacific Partnership (TPP).

While the results of PECC survey show a continued broad consensus on the positive benefits of regional economic integration such as the TPP, RCEP and an FTAAP, they also reveal concerns on the political environment for freer trade in the region, particularly within the region’s more advanced economies. Those concerns are also reflected through increased concerns within the economies on the impact of rising protectionism on future growth. The respondents thought that issues such as rising income inequality and job insecurity had serious impacts on attitudes toward trade; more important, in their view, was the failure to effectively communicate the benefits of trade and investment as well as lack of sustained political leadership. Negative public sentiments toward globalization and free trade need to be managed from the ground with appropriate public education and inclusive approach.

The rise in concerns about open trade and globalization when trade growth is down, raises the potential risk of economies choosing to resort to protectionist measures. Much work has been done by APEC over the last few years to bring attention to the importance of inclusive growth to ensure that everyone benefits from growth in the region.

“While growth across the Asia-Pacific region have undoubtedly raised millions in the region above the poverty line, the income share of the richest has been rising disproportionately faster than the rest of society. The linkage between globalization and income inequality has come increasingly to the forefront in recent years and has long been on the regional agenda. The challenge today is that the pace of structural changes is accelerating with the wider and deeper uptake of technology – the results of the survey show that governments need to implement reforms that provide opportunities for all people and sectors of society without which we would only see increase in negative sentiments toward free trade and globalization by those who feel left behind. Should protectionism increase, there are real risks of a dramatic slowdown in growth which will hurt the poorest in societies the hardest,” said Eduardo Pedrosa, Secretary General of PECC and Coordinator of the Report.

About State of the Region

The State of the Region report is an annual statement of PECC’s views on the major developments affecting Asia-Pacific regional cooperation. The report contains a macroeconomic overview of the current state of the region and related issues. It contains results from its annual survey of opinion-leaders of perceptions on key developments in the region and priorities for APEC. It is useful for gauging converging as much as diverging perceptions of stakeholders from business, government, and the research/ media/ civil society. This year, the survey was conducted from 1 August to 9 September and responses were received from 743 opinion leaders.

Respondents to the PECC survey are high-profile senior individuals from the academia; business; government; civil society and the media. They are selected by PECC member committees on the basis of their level of knowledge of the Asia-Pacific region. The criteria given for the selection of panelists were as follows:

Panelists should be from companies who have operations in a number of Asia-Pacific economies or conduct business with a number of partners from the region; this might include each economy's current ABAC members as well as past ABAC members. They may be CEOs, vice presidents for Asia-Pacific operations, and directors of chambers of commerce.

Panelists should be well versed in Asia-Pacific affairs, being the type of people governments, businesses, and the media would tap into for input on issues related to Asia-Pacific cooperation. These include heads of institutes concerned with Asia-Pacific issues, heads of departments, senior professors, and correspondents covering international affairs.

This email address is being protected from spambots. You need JavaScript enabled to view it., Mob. +51 991973087