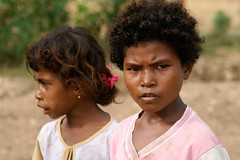 In many ways Indonesia is defined by its immense ethnic diversity. Its population of 250 million includes some 50-70 million indigenous peoples, from 1128 officially-recognised ethnic groups. And while the population of West Papua may only be around 3 ½ million, this people has endured a tragic history.

West Papuans, who are the neighbours and ethnic brothers and sisters of Papua New Guinea, have virtually no common cultural links with the rest of Indonesia. West Papuans are mainly Christian and Melanesian, while Indonesians are principally Muslim and of Malay race. The only thing that tied them together was their common colonial history, as both were part of the Dutch East Indies.

Immediately following the end of World War 2, Indonesia became an independent nation, while West Papua remained a Dutch colony. The vast majority of West Papuans wanted independence for their land, and in principle West Papua was being prepared for independence. But it became entangled in Cold War political machinations involving the US, the Netherlands, Indonesia and the UN. Then, following a sham referendum in 1969, in which little more than one thousand Papuans were allowed to vote (out of a population of around 800,000), West Papuan became part of Indonesia. The Indonesian government since has turned it into two separate provinces, namely, Papua and Papua Barat, in order to weaken it politically.

Since being folded into Indonesia, West Papua has been a veritable battleground. It has been basically occupied by Indonesia military and security forces who have waged a struggle against the West Papuan pro-independence movement, the Free West Papua group. Some 500,000 West Papuans have been allegedly killed by Indonesian security forces, with many more raped, tortured or imprisoned. Some have called it a "slow motion genocide". Some West Papuans are now refugees in Papua New Guinea, or working as virtual slaves in mines or forests. A strong undercurrent in the relationship is the attitude of arrogance and derision of Indonesians who consider West Papuans to be primitive natives.

Also at stake have been West Papua’s immense rich natural resources, especially copper, gold, and timber. Some of the worst human rights abuses take place in the vicinity of major resources developments, which pay for protection from the Indonesian military forces. Abuses include land-grabs by Indonesian and international business groups, denial of land rights, and severe environmental degradation. And many international companies are in a virtual race to destroy West Papua’s tropical forests.

The Grasberg Mine -- the world’s largest gold mine and second largest copper mine -- has been a major sore point. This is owned by the American mining giant, Freeport-McMoRan. The rights to this mine were established between the US and Indonesia four years before West Papua even became Indonesian. Some argue that this project motivated US government support for Indonesia’s takeover of West Papua. There has been much criticism of the severe environmental damage caused by its waste deposits.

By the same token, the Indonesian government has also been paying off West Papuan elites to keep them onside. Migration to West Papua from elsewhere in Indonesia has been very substantial such that West Papuans are now becoming a minority in their own land. Indonesia’s actions and policies in West Papua have been facilitated by its closest neighbour, Australia, which has turned a blind eye, as it does not wish to disturb the important relationship.

Despite West Papua’s immense resources, and being host to Indonesia’s largest taxpayer, Freeport-McMoRan, West Papuans suffer from high poverty, poor healthcare and education, high infant and maternal mortality, and a high incidence of HIV/Aids. They also suffer from stringent restrictions on freedom of expression and assembly.

Governments like that of Indonesia usually hope that a problem like West Papua would fade away in time. They hope that restrictions on access to West Papua imposed on foreign journalists and rights monitors will keep it out of the news. But it hasn’t. In 2015, West Papua was granted observer status in the Melanesian Spearhead Group (MSG), a sub-regional coalition composed of Fiji, the Solomon Islands, Vanuatu, Papua New Guinea, and New Caledonia's Front de Liberation Nationale Kanak et Socialiste (FLNKS). West Papua will now sit on the inside of the organisation alongside Indonesia. This is hoped to be an historic step toward addressing the human rights atrocities committed by the Indonesian army. The MSG was founded in 1986 to promote and strengthen trade, promote Melanesian cultures, further the economic growth of its members, sustainable development, good governance, and security.

There was great hope that Indonesia’s President Jokowi would turn a new page in human rights in West Papua, and he has indeed released some political prisoners, and granted access to West Papua for foreign journalists. But there is virtually no likelihood of a sea change under his presidency.

For its part, China is also a multi-ethnic country, and all ethnic groups are considered equal before the law. Besides the Han Chinese majority, the government recognises 55 ethnic minority peoples within its borders, who number 114 million persons, or 8.5 % of the country's total population. The government has made great efforts to improve the lives of China's indigenous peoples, in the areas of education and health. They were also allowed to have two or three children, and were thus exempt from the one-child policy. But certain groups like Tibetans and the Uighurs still suffer terrible human rights abuses.

Tibet has lived through a turbulent history. There were times when it was ruled by the Mongols and Chinese, together with times when it was independent, such as through much of the first half of the 20th century. But through all this Tibet developed and maintained a distinctive religion, culture and way of life. At the same time, economic development was minimal, and most Tibetans were desperately poor.

In 1950, following the Communist Party's victory in the Chinese Civil War, the Chinese military invaded Tibet to assert what it claimed to be centuries-old sovereignty. The Chinese government considers Tibet to be an important strategic buffer between China and India. It is also interested in Tibet's vast natural resources. Most Tibetans consider Tibet to be under occupation by a foreign power. Following a failed anti-Chinese uprising in 1959, the Dalai Lama fled Tibet for India where he set a government-in-exile, which has ever since been a strain on Indo-Chinese relations.

The Dalai Lama has been a voice for Tibetans on the international stage, and the Tibetan question has been a symbol of the tortured relations between China and the West. Human rights supporters and activists have an idealistic and almost romantic sympathy towards Tibet. This was most manifest in the Dalai Lama being awarded the Nobel Peace Prize in 1989. For its part, the Chinese government reacts with hysteria when senior Western political and other personalities meet with the Dalai Lama. So most Western governments and businesses cave into Chinese economic and political power and ignore the Dalai Lama.

China has poured literally billions of dollars of investment into Tibet. This has developed Tibet's transport, power and other infrastructure, and boosted the economy, which today is growing faster than the rest of the Chinese economy. High-speed rail links have fostered a booming tourist industry. China's state-owned enterprises have also been instructed to invest in Tibet. At the same time, there has been a large wave of immigration into Tibet of Han Chinese. It is a common assessment that these Chinese immigrants have benefited much more than the local Tibetans from this economic development, and that all the massive subsidies from Beijing have done little to promote private sector development.

But the Chinese government has also combined political repression with its economic development policies, with the Dalai Lama being a favourite target of Chinese government vitriol. The Chinese government has aggressively suppressed Tibetan political opposition and Tibetan identity. Most of Tibet's monasteries were destroyed during the Cultural Revolution. Some 1.2 million Tibetans would have been killed under Chinese rule, according to the Dalai Lama, who accuses China’s government of “cultural genocide”. In more recent times, there was a wave of unrest in 2008, and there is an ongoing wave of self-immolations by Tibetans opposed to Chinese rule. And under President Xi Jinping, political repression of peaceful dissent has been increased in Tibet, as it has elsewhere in China.

In order to solve the current Tibet issue, the Dalai Lama has proposed the "Middle-Way Approach" through a non-violent and negotiated solution. He is not seeking independence for Tibet. Rather he is seeking to achieve a genuine autonomy for all Tibetans living in the three traditional provinces of Tibet within the framework of the People's Republic of China. According to the Dalai Lama, this approach "safeguards the vital interests of all concerned parties -- for Tibetans: the protection and preservation of their culture, religion and national identity; for the Chinese: the security and territorial integrity of the motherland; and for neighbours and other third parties: peaceful borders and international relations."

China simply rejects the Dalai Lama's Middle-Way Approach, and is clearly waiting for the 81-year-old Dalai Lama to die, hoping that this will see the end of the Tibet issue. But this may well be a miscalculation. When the Dalai Lama passes, the Chinese government will lose a voice of reason and moderation, and will likely get entangled in disputes and conflicts as it tries to control the nomination of the next Dalai Lama.
Tags: asean, indonesia, tibet, west papua