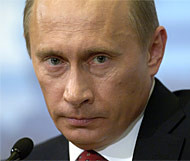 We all, not just Europeans, should all heed Julian Lindley-French's warnings about Russia.
Big wars involving democracies usually start for three reasons; disarmament, distraction, and denial. The West today suffers from all three afflictions. The leaking of the so-called ‘haul down’ report of General Sir Richard Barrons, the former commander of Britain’s Joint Force Command, is simply the latest warning from a senior commander. Some years ago I worked briefly with Barrons. I have rarely met a more thinking or erudite officer.

In an interview with The Times of today Barrons warns that Britain and NATO have no effective plan for defending Europe from a Russian attack because of splits within the Alliance. Russia, he says, could deploy tens of thousands of troops into NATO territory within 48 hours whilst it would take months for the Alliance to do the same thing. The result “…some land and control of airspace and territorial waters could be lost before NATO 28 member states had even agreed to respond”.

Disarmament: The July NATO Warsaw Summit Declaration states; “Since Wales we have turned a corner. Collectively, Allies’ defence expenditures have increased for the first time since 2009. In just two years, a majority of Allies have halted or reversed declines in defence spending in real terms”. This statement might be right in fact, but is complete nonsense in reality. It is not absolute power that is critical in any given military balance of power, but relative power. In relative terms too many NATO nations continue to disarm relatively to Russia, which is still busting its economy to rearm. Indeed, what really worries me is the combination of a weak Russian economy crippled further by massive defence investments by an autocratic regime that seems to claim political legitimacy from what is a policy that can only end in disaster.

Distraction: Reading the outputs from last week’s EU informal Bratislava informal summit I became very concerned. Apparently. Britain is now the enemy of the EU and many of its member-states. And yet, many of those same EU (and NATO) states routinely expect British soldiers to lay down their lives in their defence. Let me be clear; if in the Brexit negotiations the EU and its members attempt to punish the British people for an act of democracy it will weaken the commitment of Europe’s strongest democratic military power to the defence of Europe. Cut the stupidity, and stop turning Brexit into what is an almighty strategic distraction. Fight Britain, Europe loses.

Denial: In a recent exchange with the former Polish Foreign Minister Radek Sikorski I challenged Poles to confront the myth that Britain and France betrayed Poland in September 1939. The fact that both countries declared war on Nazi Germany on 3 September and fought a world war that ended their collective world power was proof that London and Paris were willing to honour their commitment to Poland. Moreover, I argued, if one looked at the deployment of forces, on 1 September, 1939 there was precious little else Britain and France could have done. The Wehrmacht may have had some sixty divisions on the Polish border before the invasion, but they had forty-six divisions on their western border reinforced by the Westwall (or Siegfried line) at its very strongest.

However, the Poles also have a point. Britain and France did not simply offer ‘commitments’, they offered solemn treaty guarantees for Poland’s defence before the conflict, and ‘guarantees’ of action once the war began. Neither happened. Worse, the real power in the West at the time, the United States, had retreated into isolationism. The result was that when the unthinkable happened the Western democracies were forced to trade the space of their allies for the time to ultimately defeat the enemy.

Which brings me to a fourth ‘D’; deterrence. Barrons is making essentially the same one that was made recently by NATO’s former No.2 soldier General Sir Richard Shirreff in his excellent book 2017: The Coming War with Russia. Now, I am not equating Putin’s Russia with Nazi Germany because I have too much respect for Russians and their sacrifice in World War Two to do that. However, the warning from Barrons, Shirreff, me and others is clear; when faced with aggressive, unpredictable, nationalist, autocratic regimes if they are able to generate a critical military advantage at a place and time of their choosing one has no choice but to prepare for the worst. In other words, wishful thinking does not make for sound deterrence.

The Warsaw plan is to base 1000 troops in each of the three Baltic States. Barrons says this of the plan; “There is no force behind it, or plans or resilience…It is an indication of how, at this stage in our history, I think many people have lost sight of what a credible military force is and requires. They think a little bit of posing or a light force constitutes enough and it isn’t”. So, just how many troops does Russia have right at this moment in the Western military oblast directly adjacent to the Baltic States? Four corps or 120,000 troops.

As an Oxford historian who has studied and written at length about the causes of both World War One and World War Two I have been, and I am, increasingly worried that an unstable Russia could at some point be unable to resist the opportunity to exploit an overwhelming local advantage to take Estonia, Latvia and Lithuania and present the West with a nuclear-backed fait accompli. Many of you out there will think that is unthinkable. You are in denial. It really is now thinkable. My mission, and that of Sir Richard, is to ensure that never happens.

World War Two happened because of Adolf Hitler. However, it also happened because like so many of the leaders of today’s Western democracies Britain and France were for too long in denial about the extent and the scope of the threats to the borders of democratic Europe. What to do about it? Political leaders must finally face hard reality and begin the complete and proper overhaul of NATO defence and deterrence so that defensive forces properly deter offensive forces. This means going far beyond the Warsaw window-dressing where getting the language agreed for the Declaration was more important than defending Europe. Nothing less than the strategic renovation of the Alliance is needed. To that end, I will co-lead a major project in the coming months with retired US General John Allen. Will the politicians listen? They should because if they don’t THEN history really might be revisited…and on their watch.