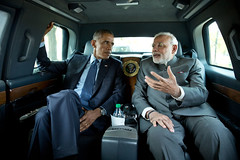 India and the New West

The US-India strategic relationship promises to be one of the most important security relationships of the twenty-first century, writes Julian Lindley-French.
"India is already assuming her responsibilities in securing the Indian Ocean region…A strong India-US partnership can anchor peace, prosperity and stability from Asia to Africa and the Indian Ocean to the Pacific.” Prime Minister Narendra Modi, US Congress, 8 June, 2016

While Europeans wallow in the mud-pit of endless self-obsession the world moves on. Indian Prime Minister Narendra Modi made Wednesday one of the most important strategic speeches this century to a joint session of the US Congress. The fifth Indian prime minister to be accorded such an honour as he spoke I sensed I was listening to the future. When I have heard British prime ministers make such speeches of late my sense has been too often of listening to the past. It need not be like that.

In a speech that combined humour and realism in equal measure Modi laid out the terms of what for me is the New West. Now, Indian readers of this blog might with some force suggest an element of cultural imperialism on my part by even placing the emerging US-Indian strategic partnership in those terms. After all, the West, like modern India, emerged from the British Empire, and not always without struggle.

However, for all my British chutzpah there is some strength in the idea. For my part I have long held the West to be an idea, not a place. Indeed, many of my books and articles have been inspired by that very idea. Indeed, when I cast my seasoned eye over the world today I see a new global bipolar order emerging, with liberal power on one side of a struggle with illiberal power the world over – be it states such as China and Russia, and/or groups such as ISIS.

India is certainly a twenty-first century great power by any standards. If one considers economic power the IMF calculates that in terms of nominal GDP in 2015 India had the ninth largest economy, with the US having the world’s largest, and the British the fifth largest world economy. However, the IMF suggests that if one considers purchasing power parity in 2015 India had the world’s third largest economy, after China and the US, with the UK down at eighth. If once considers military power India is also a Great Power. In 2015 the International Institute for Strategic Studies placed India as fifth biggest defence spender in the world, after the US, China, Saudi Arabia and the UK.

It is liberal-democracy and the rule of just law that is at the heart of the New West. However, if this West is to prevail it must be reinforced by power – economic and military. The United States by dint of its very strategic weight is emerging as the hub of the New West, a world-wide web of democracies that will come to define perhaps the world’s most powerful security grouping in the twenty-first century.

However, for the New West to become fact those of us in the Old West will need to change our thinking, particularly about India. Some years ago I attended a meeting in New Delhi with senior Indian politicians. Sitting next to me was an official from the British High Commission. My thesis was as ever direct; the Raj is over, India is an emerging Great Power and, for all London’s declinism and its propensity to view foreign policy as a perpetual strategic apology, Britain remains a Great Power. Therefore, it is time for Britain and India to celebrate the much that the two powers share, move on and do business.

As I spoke I could feel the discomfort from my Foreign Office colleague. For the ‘FCO’ ‘don‘t mention the Raj’ with India has the same sacred mantra quality as ‘don’t mention the war’ with Germany. When I had finished said official effectively apologised on my behalf for my remarks by distancing the FCO from them, even though it was not his place to do so. At that point an Indian politician said that I was right. Britain’s endless apology for the past was in fact a form of arrogance; an attempt to frame India eternally in terms of Britain’s past. That must stop.

Prime Minister Modi made it perfectly clear that India will define its relationship with the United States and the wider West on Indian terms. It will be a pluralistic relationship built on strength and respect. He is surely right. However, for the huge potential in the Indian-US relationship to be truly realised Western capitals must see India for the power it is. India is still too often viewed through the lens of post-colonialism by the West. Yes, India has a myriad of developmental problems to overcome. However, there can be little doubt that the world’s biggest democracy has the wherewithal to do just that.

The US-India strategic relationship promises to be one of the most important security relationships of the twenty-first century – built on the very mix of power and values needed to shape and not suffer a changing world. If European powers like Britain and their little leaders could only stop being so pathetic and wake up and smell India’s strong coffee, they too could be part of the exciting future Prime Minister Modi’s presence in Congress implied, and part of a New West (or whatever you want to call it) that India will help define.