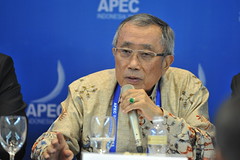 The Pacific Economic Cooperation Council argues that regional solutions are needed for global challenges.
Indonesia’s Minister of Trade, Mr. Thomas Lembong stressed the importance of public process and communications to explain the benefits of trade to “men and women on the street” in very simple terms without which there will not be public support for regional economic integration. He was speaking at the concluding panel discussion on the opportunities and challenges for regionalism in view of AEC, RCEP, and the TPP during a conference co-organized by the Pacific Economic Cooperation Council (PECC) and the Jakarta Post on 25th April.

ASEAN Secretary-General Mr. Le Luong Minh said in his keynote speech, “With the establishment of ASEAN Community last year, ASEAN, through its Vision 2025, has embarked on a new phase focused on consolidating gains from last fifty years’ work, addressing the existing and emerging challenges of the next decade.” He said that the ASEAN Vision 2025 was also complementary to the United Nations 2030 Agenda for Sustainable Development.

At the end of 2015 in Kuala Lumpur, ASEAN leaders adopted the ‘ASEAN Vision 2025’ which looks forward to an ASEAN Economic Community (AEC) that is highly integrated and cohesive; competitive, innovative and dynamic; a people-centered and people-oriented community that is also integrated with the global economy. In order to maximize gains from the AEC, ASEAN policy leaders must engage a broader public, those who remain unaware of, and question the benefits of integration.

The former Trade Minister of Indonesia, Dr. Mari Pangestu said that “New drivers of growth and productivity should come from regional economic integration and this goes beyond having a single ASEAN market,” she said. Emphasizing on the importance of building domestic consensus, she urged, “Media needs to do more to educate the public on the benefits of ASEAN economic integration.”

PECC Co-Chair Ambassador Tang Guoqiang said, “A full-fledged AEC relies on the joint efforts of both ASEAN and other economies in the region in completing the supply chains, the production network and the value chains, in enhancing connectivity-building and financial cooperation, and in promoting the RCEP negotiation process.”

While much progress has been made on poverty eradication in ASEAN, gaps in wealth distribution and technology have widened over the years. The number of natural disasters associated with climate change and their damages have risen in recent years. The Paris Agreements are a major breakthrough in responding to climate change challenges but there is much more to do in terms of behavioral and mindset changes to actually slow down the environmental degradation. Dr. Soogil Young, former Chair of Presidential Committee on Green Growth of Korea suggested that economies in the region adopt green growth strategies to build climate change mitigation into national development plans.

With the above backdrop, a couple of multilateral milestones were achieved recently: the official formation of the ASEAN Economic Community (AEC) on 31 December 2015 that brings together ten markets with a population of 622 million people and a total GDP of US$2.6 trillion; and the conclusion of the longstanding Transpacific Partnership (TPP) agreement negotiations tying 12 Asia-Pacific economies including four ASEAN members.

Mr. Jusuf Wanandi, Publisher of the Jakarta Post and former Co-Chair of PECC, said that the PECC-Jakarta Post conference on April 25th was designed to convene thought leaders from the region’s prominent business and media entities including chief editors to consider these challenges and the roles they need to play in the new environment. “We have organized this conference, ‘Global Challenges and Regional Solutions: Engaging stakeholders’ in Jakarta to think about what comes next after the launch of AEC and the conclusion of TPP negotiations,” he added.

Aside from the economic, two other pillars of the ASEAN Community encompass the political-security as well as the socio-cultural areas. In his keynote speech to an audience of about 200 attendees, Mr. Hassan Wirajuda, former Foreign Minister of Indonesia said that countries have become more perceptive to including political development into the regional agenda although it remains “an uphill battle.” He said, “Regions need to promote political dialogue. Economic discussions have often overlooked political and security dialogue.”

Much of the Asia-Pacific’s growth over the past three decades has been driven by exports. With trade growth anemic, other growth engines need to take its place. Initiatives are underway that could promote more efficient cycling of funds into core growth boosting activities in infrastructure such as the Asian Infrastructure Investment Bank (AIIB) while technological innovations made in the e-commerce sector and financing mechanisms such as ‘fintech’ and crowdfunding can help to unleash the potentials that exist in the world’s most populous region.