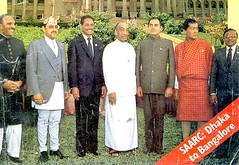 SAARC Minus X: A Constructive Approach for India’ Regional Integration

Estimates by UNCTACD (United Nations Conference on Trade and Development) suggest that intra-SAARC merchandise trade share in total SAARC trade was 5.8 per cent in 2013. This share will still remain low even if cross-border unaccounted trade, most of which is with India given the geography, is included. In contrast, intra ASEAN (Association of Southeast Asian Nations) trade among its ten members was 24.2 per cent in 2014.

In some areas however, there is considerable cross-border integration, especially between India, Bangladesh, Nepal and Bhutan. Data from the World Bank’s Migration and Remittance Fact book 2016, ranked India as among the leading migrant destination in SAARC, with a stock of 5.3 million in 2013.

The India-Bangladesh migration corridor ranked as the third largest corridor in 2013 accounting for a stock of 3.2 million persons. While not officially documented, the number of people from Nepal working in India is variously estimated at between 2 and 3 million people, a fact often unappreciated and unacknowledged, even by the researchers. India also provides access to citizens of Bhutan in education and employment opportunities. There is also not insignificant movement of people between India and Sri Lanka

As India’s regional and global integration becomes deeper and broader, creating data gathering and analysis capacity to document and analyse the details of foreigners working and living in India merits urgent consideration.

The same World Bank source estimates ranks India-Bangladesh as among the top remittance corridors globally, accounting for official flows of USD 4.2 billion in 2015. Remittances through unofficial channels are likely to increase this figure. Much of India’s external aid is directed to SAARC countries, particularly to Nepal, and Bhutan.

By Government of India estimates, SAARC countries accounted for 6.5 per cent of India’s total merchandise trade in 2014-15.

The services trade data are not available on a disaggregated country basis, a gap which the Indian authorities should urgently address. In 2014, India’s exports of services was USD 154 Billion in 2014 (nearly half of the value of Merchandise exports), while its import of services was USD 124 billion, (26.9 percent of its merchandise imports). These are substantial values requiring better disaggregated and timely data collection and reporting.

Broadly, there are at least five major areas of services where India needs to enhance its focus and capacity for regional and global trade. These are tourism, transportation, including port and air transport, financial services, health care, and education services. Cyber security services are another potential services area which India could develop global competitiveness given its talent pool in the IT sector, and with more than one billion mobile phones, suggesting that 80 percent of the population is connected.

Organization of Indian Education Fair in Bangkok, Thailand on January 30 and 31, 2016 involving over 70 institutions from India is a step in the right direction. More outcome-oriented initiatives to expand India’s economic linkages with near neighbours are however needed.

In 2014,SAARC countries accounted for 9.0 percent of Global GDP in PPP (purchasing Power parity) terms; only 2.8 per cent of total global trade in goods and services ; but for 23.8 per cent global population. This suggests that SAARC members have insufficiently focused on developing their capacities to use regional and global interlinkages for growth and development, an omission which they need to urgently address.

Till recently, SAARC countries have been growing at multiple speeds in different sectors, and often with an inadequate appreciation of the role that trade and economic integration with neighbouring countries can play in generating sustained growth and ameliorate regional conflicts. An example of this is unwillingness of Pakistan to normalize trade and economic relations with India, and its refusal (as of January 2016) to grant India even the elementary MFN (Most Favoured Nation) treatment. This has in turn contributed to limited progress in SAARC inter-linkages in general, and to India’s deeper integration with SAARC, and through SAARC with some of the ASEAN (Association of Southeast Asian Nations) countries, particularly Myanmar and Thailand.

To help willing SAARC countries to move from their current lower-middle income country group to upper-middle income group in the current global environment, SAARC Minus-X approach, relatively successfully adopted by ASEAN to get around lack of consensus on some integration issues in their region, holds promise for India. In essence, SAARC members should first focus on areas where mutual cooperation is beneficial, and not permit issues of politics or ideological disagreements, i.e. the “X”, to impede progress by willing members in other areas.

The Indian government’s recent efforts of systematically and competently taking initiatives in this direction have been commendable, as evidenced by the examples discussed below. In some cases, initiatives of the previous government have been refined and more energetically applied, thus providing continuity to India’s economic diplomacy.

Various initiatives to improve physical and digital connectivity undertaken by the government have opened up new avenues for growth and competitiveness for India’s Northeast Region. For the first time, two broad gauge trains to Murgongselek in Assam, and to Bhalukpong in Arunachal Pradesh became operational in August 20-15. There are plans to connect all eight North East States through Railways by 2020.

A direct bus line has opened between India’s Tripura State which is land-locked and Bangladesh; and a direct rail link between Agartala in Tripura state to Akhaura in Bangladesh.

Improved road and rail connectivity could encourage new growth nodes for the states in the Region, help in better managing illegal cross-border trade, and improving fiscal revenues. These measures should not only continue but intensified with willing partners from SAARC and others such as Myanmar and China.

Following Bangladesh’s push towards sub-regional cooperation, the Motor Vehicles Agreement was conceptualized 2013 and inked on June 15, 2015. Bangladesh, Bhutan, India, and Nepal (BBIN) have agreed to further facilitate cargo traffic and movement of personnel to Thimpu, Bhutan. The agreement will ease cross-border flow of goods and people, improving regional trade by creating economic and transport corridors. The agreement is also expected to have a positive impact on tourism within the region.

Following this, India and Nepal also amended their bilateral Treaty of Transit on June 22, 2015 allowing the movement of vehicles imported from a third country into Nepal through four border points. In January 2016, Nepal has reportedly sought India’s support to activate the shortest trade route with Bangladesh.

Following the BBIN agreement, India will also be signing a similar agreement with Myanmar and Thailand to improve connectivity within the region. The ministry will also embark on constructing one lakh km roads in the next five years in the eight northeastern states bordering China, Bangladesh, Myanmar, Nepal and Bhutan.

Three SAARC countries do not require visa to enter India. They are Bhutan, Nepal, and Maldives. Sri Lanka nationals could avail of visa-on Arrival facilities.

In addition to SAARC minus X agreements, SAARC counties have also focused on bilateral agreements within the region. In 2015, India and Bangladesh focused on improving regional connectivity and trade enhancement. India and Bangladesh recently renewed their bilateral trade agreement, in which India allowed used of its waterways, signed a coastal shipping agreement, and MoUs use of Bangladesh ports. Apart for maritime cooperation, the two countries also signed agreements to improve transportation between West Bengal and Dhaka. The two countries have ratified the Land Boundary Agreement, settling disputed borders, a major confidence building accomplishment, setting the stage for greater mutually beneficial economic-interlinkages.

The Indian Space Research Organization is also close to launching a “SAARC Satellite” in December 2016. The satellite will have 12 KU band transponders and is expected to provide assistance to SAARC countries in tele-medicine, tele-education, village resource centers, crop productivity and disaster management. This is specifically of need to countries like Bhutan, currently in need of such resources.

In 2014, India-Bhutan signed a hydropower agreement, which has been the focal point of India-Bhutan’s trade. However economic cooperation set to grow in areas such as tourism and agro-processing and trade with Bhutan is expected to double over the next five years. In October 2014, India and Nepal entered into “Electric Power Trade, Cross–Border Transmission Interconnection and Grid Connectivity” agreement. This will facilitate trade in power between the two countries. India has plans to export 100 MW of power from the State of Tripura to Bangladesh by early 2016, improving energy security for both countries.

In 2015, India and Sri Lanka signed visa and customs agreements, among others, focusing on trade improvement through reduction of non-tariff barriers. The two countries have also agreed to focus on maritime and energy cooperation. Similar to the BBIN agreement, India and Afghanistan are also expected sign an agreement to improve connectivity. India is finalizing a transit agreement to allow Indian goods to enter Iran through Chabahar port on the country’s southeastern coast bordering Afghanistan. This will enhance the economic and strategic space for all the three countries involved, particularly as sanctions on Iran have now been lifted.

This suggests that India has an opportunity to engage its willing “near neighbors”, in SAARC, ASEAN, and West Asia to form cooperation alliances in specific areas. These could include agriculture and fisheries for food security, technology-based health care; conventional and non-conventional energy; tourism, education services, logistics and supply chain infrastructure; and defense related goods and services.

The key desired outcome is to extend India’s economic and strategic space, while constructing mutually beneficial agreements, enhancing collective resilience of the group of willing near-neighbors.

This article was first published in SWARAJYA, January 27, 2016.