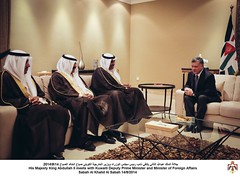 In the Middle East, there is a little country called Jordan, well known for its ancient site of Petra, though little else. But, Jordan is a country worth more than its weight in gold, writes John West

Jordan is a haven of peace.

Jordan is a haven of peace in a troubled region. It has largely escaped instability emanating from the Arab Spring, the Islamic State, and the upheavals in Syria.

Jordan is not a democracy. But the leadership of King Abdullah II is very wise, moderate and sensible. Indeed, his leadership is vastly superior to that of all other Middle East countries, including the region's few democracies. And Abdullah is greatly respected by his subjects -- “where else in the Middle East would you want to live”, they say.

Taking advantage of Jordan's stability and wise leadership, foreign governments like the US and Australia, and many United Nations organizations are adopting Amman as a regional headquarters for their Middle East activities. And King Abdullah is a key player in all regional discussions/negotiations.

Jordan is a welcoming country.

Stingy countries like the US, UK and Australia debate how few refugees they are willing to accept, even though their invasion of Iraq is at least partly responsible for the instability that is provoking the floods of poor refugees today. In contrast, Jordan hosts the largest refugee community globally when compared with its population, and the third largest number of refugees in the world, with 1.4 million Syrians, 220,000 Iraqis and 1.7 million Palestinians. Many rich countries make big promises of financial donations to help Jordan support the burden of its refugees, but all too often they do not follow through on their promises.

In Jordan, multiculturalism starts at the top. King Abdullah's mother is English. His wife, Queen Rania, is Palestinian. And in Jordan Muslims and Christians, Jordanians and Palestinians, Egyptians and Iraqis and Syrians, Circassians and Chechens live together in relative harmony.

Living Jordan, one is immediately struck by the human warmth and kindness of Jordanians. If you have any Islamophobic friends, please send them to Jordan on holidays. The country is a revelation.

Jordan is a beautiful country.

Everyone has heard of Petra. But there is so much more to see such as historical sites like Jerash, Umm Qais, Pella, Karak, and Madaba, and natural sites like Dana Nature Reserve and Wadi Rum.

Jordan has of course the great Middle East staples of falafel, hummus, mtabal, fuul, and many others. But there are many other dishes like "mansaf", the national dish and most distinctive plate of Jordan. Mansaf is made of lamb cooked in a sauce of fermented dried yogurt called jameed and served with rice or bulgur.

Many will be surprised to learn that Jordan actually makes some good wine. Some of the best Jordanian wines come from Mt Nebo, where the prophet Moses spent his last days.

Jordan is becoming a tech powerhouse.

At the initiative of King Abdullah, Jordan has developed its IT sector, which now accounts for some 12% of GDP. One successful Jordanian tech company is IrisGuard, which manufactures iris biometrics and iris recognition camera systems for commercial and government security solutions. The United Nations High Commission for Refugees is now using IrisGuard’s iris-recognition technology for the registration of Syrian refugees in Jordan.
Tags: asia, jordan, middle east, king abdullah II