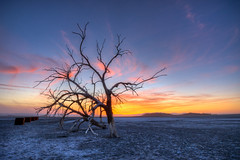 Despite its ongoing struggles with waters, California remains a key supplier of specialty crops to the Asian market, write Asit K. Biswas, Matthew J. Kastner and Cecilia Tortajada.
California is well known for its celebrities and tech companies. A lesser known fact is that California has more agriculture than any other state in the U.S., at almost $50 billion. The last time you ate an almond, artichoke, date, pistachio, or any of another eight crop commodities produced in the U.S., it probably came from California. With such a large market share for many specialty crops, one would think the drought that is now in its fourth year would send crippling supply shocks through Asia. Yet even though East and Southeast Asia import over $6 billion of food from California alone, the smart allocation of scarce water by Californian farmers has resulted in little change in food supply and prices.

California agriculture consumes 80 percent of the state’s water and so it is especially vulnerable to prolonged droughts. The state has had lower than average precipitation, as well as higher than average temperatures since 2011. The effects of this were not felt until 2014 when reservoir levels dropped on average to 50 percent of historical averages. This year, reservoir levels are even lower and the impacts of the drought are more severe. 2014 was the first year major changes in crop production were seen relative to previous years and those changes have continued through 2015.

One reason Asia’s food prices for products imported from California have remained relatively unchanged is because growers are utilizing water in an efficient way that minimizes the economic damage. Low-value crops such as corn, cotton and rice are being fallowed whereas high value crops such as almonds are still receiving water, keeping production at conventional levels.

USDA released its forecasts of crop production in August, and some massive reductions relative to 2013, the most recent “normal” year, are evident. The most notable changes are for corn grain (-66 percent), barley (-44 percent), cotton (-44 percent), wheat (-43 percent), rice (-33 percent), hay other than alfalfa (-26 percent), and oat (-25 percent). Interestingly, other crops are actually not suffering. Production may even be increasing. California accounts for 75 percent of the world’s almonds. Almost 20 percent of everything produced in the state is exported to Asia, and shipments have fallen only 10 percent. Exports of wine grapes to Asia, accounting for almost 20 percent of total production, have decreased by just 7 percent. These low reductions in production coupled with Asia’s diversified portfolio of suppliers means little change in supply, and stable prices.

Asia imports more than 60 percent of California’s output of some commodities that have had the sharpest declines, such as cotton. Can we expect higher prices in clothing as a result? For regular cotton products, this is unlikely since California accounts for only 4.4 percent of U.S. production. For the luxurious Pima cotton that is used in higher end products, California contributes almost 80 percent of domestic supply. Pima production has decreased a sizeable 30 percent compared to 2014. For these products, a price increase is possible, but again, this is a small, high-end market that will not affect the average consumer.

These figures illustrate the resilience of California and the intelligence of its growers in allocating water where it is most profitable. Fallowing an acre of corn costs a grower a lot less than fallowing an acre of almonds. Corn is not only worth less, it must also be replanted and grown every year. An almond tree requires at least three years of growth before it starts producing almonds. It can then produce almonds for two decades. The trend to save expensive, perennial crops extends beyond almonds to tree fruits, grapes, and other nuts.

Another reason prices of Californian exports to Asia will have little impact on the final price paid by the consumer is because the commodity price paid is just a portion of the final price of the good on the retail shelf. Even for fresh produce where 40 percent of the final value of the produce is paid directly to the farmer (the highest of any commodity classification), 60 percent of the retail value is determined by external factors not related to production (such as drought), including transportation and other supply chain costs. With low oil prices, transportation is cheap. Additionally, in China, tariffs on almonds and pistachios dropped from 24 percent to 10 percent and 10 percent to 5 percent, respectively in 2015.

This is good news for consumers of these specialty crops grown almost exclusively in California. Prices at grocery stores are not changing and are unlikely to do so in the coming months. The latest figures on food inflation in Japan, South Korea, and China are 2.5 percent, 2.2 percent, and 3.7 percent, respectively, over August 2014. Of course this aggregates many food products and represents many commodities grown outside of California but the fact remains that large food price fluctuations are not likely.

If the drought persists for another year or two, will Asia remain invulnerable to price fluctuations from commodity markets dominated by Californian products? Yes and no. Again, the price on the retail shelf reflects many factors not affected by drought, thus reducing its influence. Moreover, California has implemented water saving measures and has invested in capabilities to adapt to future droughts, such as better flood control when rain finally comes that will increase groundwater stocks to be used during the next drought. Additionally, farmers are allocating water to the most valuable crops, which are the ones Asia imports the most.

For the short term, then, Asia will be resilient to California’s drought, even for the most important of the state’s exports. Retail prices are determined by many other factors along the supply chain, which buffers price fluctuations linked to drought. As discussed, farmers are mitigating the effects of drought by allocating water to high-value perennial commodities, fallowing low-value annual commodities grown in many states, and pumping more groundwater.

Yet Asia may be vulnerable to future droughts because currently California agriculture is depleting a source of water the supply of which is shrouded in uncertainty – groundwater. A preliminary analysis produced by UC Davis on the 2015 drought suggests that 71 percent of surface water reduction from the drought is being replaced by groundwater pumping. This could result in a tipping point where another year or two of drought could deplete groundwater to a level where pumping becomes impossible or uneconomic. Moreover, a lack of surface water means there is less replenishment of groundwater. Thus, pumping more groundwater could be akin to burning the candle at both ends.

For this reason, over the long term, prolonged drought in California could result in price fluctuations for Californian exports. But the state is taking steps to reduce the impacts of future droughts, for instance in developing water resources and changing policies. A new desalination plant has been built in southern California and groundwater management plans are now required by law to be adopted by 2020. Crops requiring a lot of water with little payout, such as corn and wheat, are being forced out of the state. And the legitimacy of the entrenched water rights’ laws of California is being called into question. With these measures, it appears likely that Asia will be able to count on California as a supplier of high-value specialty crops for many years to come.

Asit K. Biswas is Distinguished Visiting Professor at Lee Kuan Yew School of Public Policy, Matthew Kastner is a Master’s student at the National University of Singapore and Cecilia Tortajada is a Senior Research Fellow at Institute of Water Policy at the same School.

This article was originally published by The Diplomat on September 30, 2015.