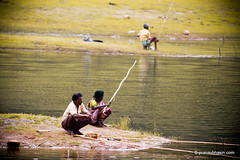 The 7th World Water Forum was held in Daegu and Gyeongbuk in April. Nearly two months have elapsed since the Forum, and it is appropriate to analyse the impacts of this mega-event on the water sector and also the world.

The Forum is an event of the World Water Council. It is held every three years. The focus of the 7th Forum was “water for our future.” This is an important issue since there are indications of water stress in nearly all countries in terms of quantity and quality.

Consider some critical facts. The world population is estimated to increase by some 2.3 billion by 2050, to 9.6 billion. Not only safe water will have to be provided for the extra population expected, but also their water-related needs have to be met in terms of food production, energy generation, environmental quality and industrial and commercial activities.

To compound the problem, the number of middle class households is increasing even at a faster rate: from 1.8 billion in 2009 to 3.2 billion in 2020 and 4.9 billion by 2030. This emerging class is more educated and media-savvy and demanding progressively increasing standard of living and quality of life.

Satisfying future water needs of the world will be a truly Herculean task. At present at least 3.6 billion people do not have access to clean water and some 90 per cent of people in the developing world do not have proper wastewater collection, treatment and disposal facilities.

Take India. Nearly 30 per cent of its current 1.28 billion people do not have any access to electricity. Another 300 million people have access only to intermittent electricity, severely restricting their economic and social development potential.

To provide electricity to all of them will mean huge increases in water use by the power sector, unless the efficiency is very significantly increased. This is because no electricity can be generated without water.

Thus, the focus of the Forum was very appropriate since future water security of the world is a serious critical issue. Equally, the Forum, which is the world’s largest water meeting, is the right and most appropriate platform to debate the future global issues robustly from multidisciplinary, multi-sectoral, multi- issue and multi-country perspectives.

Sadly, even though the Forum was supposed to discuss future issues, over 90 per cent of the discussions were on past and present ways of water management. The water profession continues to be very conservative. For at least four decades, it has been saying that business as usual can no longer be the solution but behaving as if there are no business unusual solutions.

There were very few sessions and presentations that specifically considered how water management should change even by 2025, a decade from today, let alone how we can manage the water requirements of an increasingly water insecure world to 2030 and beyond.

All the sessions implicitly or explicitly considered that the world will only be incrementally different in the coming decades, when unquestionably the reverse will be the case.

Of all the sessions I attended, only two stand out in terms of discussions of future issues. The first one was on the future of the world’s water beyond 2030, in Daegu. The session discussed how many of the current and past paradigms need to be jettisoned completely or modified dramatically, including integrated water resources management which the Ministerial Declaration dutifully endorsed even though it has not worked anywhere over the past 50 years.

Take research and development (R&D) activities. In the past, such activities primarily came from the universities and research centres, which is no longer the case. For years now, the private sector is seriously outspending the public sector in R&D.

For example, Nestlé’s R&D annual spending is now around $2 billion. For the Tata Group, a multinational headquartered in India, its current annual R&D spend is around $2.6 billion, which is a 28 per cent increase over the past three years.

All the signs are R&D spends of many forward-looking private sector companies will increase progressively in real terms in the coming years. There is not a single university anywhere in the world whose entire annual research budget in all fields now exceeds $2 billion, and is guaranteed to increase in coming years. Yet, the private sector is not adequately represented in such a forum.

In this session, we learnt how Nestlé has reduced water use per tonne of product by 40 per cent during the 2005- 2015 period and plans to reduce its water and carbon footprints further in coming years. Two of its major manufacturing plants in India and Mexico are now water neutral or even water positive, by capturing water which simply evaporated in the past. The company plans to do the same in all its milk processing plants all over the world.

Between 2004-2012, Coca-Cola has increased its water use efficiency by 21.4 per cent. In 2004, it was using 2.70 litre of water to produce one litre of product. By 2020, it expects to bring it down to 1.70 litres. Additionally, by 2020 it expects to return to communities and nature the equivalent amount of water used for its beverages and their production. It has already achieved this goal in India and Mexico.

Private sector companies like Nestlé and Coca-Cola are pioneering a blue revolution primarily because water is becoming a serious business risk and may even be an existential risk. However, we are not seeing commensurable progress in water management by the public sector.

The second impressive session was one organized by Korea International Cooperation Agency (KOICA) on official development assistance (ODA) and water. In this well-attended session, one learnt how ODA is helping to alleviate the impacts of water crisis in developing countries by improving the quality of life. This session had also one of the best and objective papers that discussed climate change and its potential impacts on water management in developing countries.

In the area of international aid, KOICA often is not that visible.

Based on the quality of the discussions in the session, it should take a front seat in global development dialogues. It was impressive to learn to what extent it has played a critical role in improving the reliability and quality of water services in Ghana which have already had remarkable impacts on health and other socio-economic aspects of the people.

KOICA is supporting similar projects in Mongolia, Azerbaijan and the Philippines. It is imperative KOICA shares with the world the lessons learnt from these projects so that impacts of other ODA activities in the future could be significantly better.

Overall, the sessions of the Forum did not succeed in giving a realistic indication of what are likely to be the problems of the future and how these can be effectively solved. By focusing on present and past issues and problems, it basically reiterated the discussions that have occurred in the past water meetings for the umpteenth time.

While technical discussions of future water issues left much to be desired, the Forum did help in several ways.

First, it helped to increase the awareness of past and present water problems among various sectors of the population, including policymakers, general public and the media.

Second, it brought together interested parties to one single location to discuss numerous issues from different perspectives and interests.

Third, it provided an opportunity to listen to different opinions on similar problems and issues, as well as their solutions, and the reasons for these differences.

Fifth, it raised the profile of water- related issues in the national and international media.

And, finally, it provided an excellent opportunity for networking with people from different parts of the world. Often one learnt more during these informal networking sessions than what actually transpired at the Forum itself.

The world water management will change more during the next 15 years compared to the past 100 years. The past experiences will often provide no guidance, or at best limited guidance, during this period of explosive changes, increasing complexities, uncertainties and unexpected turbulences as well as to meet the escalating aspirations of a growing middle class.

The stakes are high. Equally there are new opportunities to radically improve water management as never before in human history. As Mahatma Gandhi said: “The future depends on what you do today”.

Asit K Biswas, a recipient of the Stockholm Water Prize in 2006, is Distinguished Visiting Professor at Lee Kuan Yew School of Public Policy, Singapore and one of the world’s leading water experts.

This article was originally published by the Indian Water Review, Volume 2, Issue 5, May 2015.