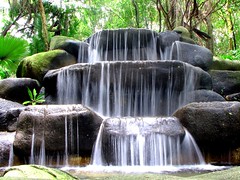 Urban Water Management in Singapore: Past, Present and Future

Singapore's impressive history with water management leaves it well placed to tackle new challenges, argue Asit K. Biswas and Cecilia Tortajada.
This year is the 50th anniversary of Singapore’s independence. In the hoopla of this anniversary celebrations, one major item that has taken a back seat is how Singapore managed to improve its water management from that of a below average developing Asian city in 1965, to one of the best in the world, if not the best, within a short span of about two decades. With about 300 leaders of major utilities from all over the world set to meet in Singapore, it is appropriate to look back on what Singapore has achieved, and also look forward to the challenges it is likely to face during the next 25 years.

Singapore does not have a long history of urban water management. In 1857, a philanthropist, Tan Kim Seng, donated S$13,000 ($9673) for the construction of its initial waterworks and a piped water system. The first reservoir was constructed in 1868 and was later expanded in 1891. The expansion was overseen by the city’s municipal engineers, James MacRitchie, and it still bears his name. MacRitchie also proposed that night-soil be collected and disposed of in the sea. Fortunately, tidal conditions meant that proposal was never adopted.

The history of urban water management in Singapore was largely uneventful until 1965 when Singapore became independent and the architect of modern Singapore, Lee Kuan Yew, took a special interest in water. Lee decided that water was a strategic, even existential issue for Singapore and thus must receive high priority. This decision was based on two events.

In 1942, the British blew a 70-ft gap in the causeway to slow the Japanese advance. The explosion ruptured the pipe with water from Johor that was under it. Singapore had then only two reservoirs and two weeks supply of water. The Japanese crossed Johore Straits in collapsible boats to take over the city. The vulnerability of Singapore in terms of water made a profound impression on Lee.

The second event occurred in 1965. The then British High Commissioner, Anthony Head, told Lee that the Malaysian Prime Minister had told him: “if Singapore’s foreign policy was prejudicial to Malaysia’s interests they could always bring pressure to bear on them by threatening to turn off the water in Johor.”

These two events shaped Lee’s lifelong view of the strategic importance of water. He immediately asked for an estimate of how much rain fell in Singapore and how much of it could be made potable. He established a unit in his office that assessed all government policies through the lens of water. As he noted “Every policy had to bend to the knees of our water survival.

There is no question that because of Lee’s personal and continuing interest in water, Singapore’s urban water management became the envy of the world. National leaders everywhere tend to become interested in water only when there is a drought, flood, or other natural hazard. The moment the hazard disappears, water vanishes from the political agenda. Lee is a rare leader who was consistently interested in water throughout his entire political career.

Singapore’s improvements were remarkable. Consider floods. In December 1969, floods resulted in five deaths and caused damages of $4.3 million (in 1969 prices). Nearly 6,900 ha, or 12.8 percent of the land, was flood-prone. In the decades since, Singapore has not had a single fatality due to floods, with the exception of a boy who inadvertently stepped into a flooded drain in 2011. Flood-prone areas have been reduced to 34 hectares today. The average flood currently lasts less than 30 minutes.

The last night-soil removal service was phased out only in January 24, 1987. Singapore now has an outstanding system of wastewater collection, treatment, recycling and reuse to produce ultra-clean, high-grade reclaimed water (NEWater), which has become one of its four sources of water.

Another example is the cleanup of Singapore River and Kallang River Basin. In 1977, as part of his redevelopment initiatives, Lee set a target of 10 years to clean up the polluted river and basin. True to Singapore style, once the political decision was made, the cleanup was completed within the schedule: Among the steps taken, more than 46,000 squatters living in the area and discharging liquid and solid wastes were resettled, while 610 pig farms and 500 ducks farms were phased out. The emptied areas were transformed into housing estates, new towns and industrial parks with tap water and sanitation facilities.

An analysis of the benefits of the cleanup, including a phenomenal increase in commercial activity and land values along the banks, in addition to significant health, social, and environmental benefits, confirm the wisdom and foresight of Singapore’s political leadership. This extraordinary performance was made possible by consistently strong political support form the highest levels of the government and long-term visionary planning.

What is remarkable is the forward-looking approach and timely execution by the Public Utilities Board (PUB), Singapore’s water agency. PUB has been consistently underpinned by responsible and proactive political and administrative leadership, and a relentless pursuit of economic growth, contributing to steady improvements in the living standards of society and a perpetual quest for sustainable development. The net result has been a true success story of self-resilience, creation of consistent growth opportunities, and good governance. This is in spite of a scarcity of natural resources, including water.

There is no question that PUB has had a remarkable past and present. Its overall performance certainly has been significantly better than any water utility we know of anywhere in the world. The question that arises then, is what about the future?

The future, of course, is not easy to predict. There will be many issues over which the city-state will have no control. Among these are extent of climate change, the availability and prices of energy, advances in science, management and technology, and Singapore’s competitiveness compared to other countries.

For PUB, many of the national decisions will be out of its purview. Among these additional uncertainties will be the future of population growth, the type of economic growth and the nature of industries that the country may emphasize (including their water use and wastewater discharge requirements), and the perceptions, aspirations, and expectations of Singaporeans. These will be decided by the country as a whole. PUB naturally could offer inputs but in the final analysis may have to react to the decisions made.

And Singapore has a number of water-related issues that will require attention.

First, at 150 liters, per capita water consumption in a country that now imports nearly half of its water from Johor is simply too high. The current targets of reducing it to 147 liters by 2020 and to 140 liters by 2030 are too modest. Per capita water consumption in many European cities like Berlin, Barcelona, Hamburg or Munich is lower than Singapore’s 2030 targets. In fact, Hamburg, in 2008, had per capita consumption of 105 liters.

A significant part of the reduction in these European cities has been through water pricing. Singapore’s water pricing has remained unchanged since 2000. In much of the Western world, water prices have been rising at a rate that outstrips inflation. Considering inflation alone, Singapore water prices in 2014 were 25.48 percent lower in real terms compared with 2000.

Yet the median monthly household income for employed households has increased from $4,398 in 2000 to $8,292 in 2014. Assuming a household uses 20 cubic meters of water, their total water cost has fallen from 0.69 percent of income in 2000 to 0.36 percent at present. In contrast, electricity and gas prices in real terms have increased by 3.64 percent and 2.94 percent, respectively. In our view, if water prices were indexed to inflation, per capita water consumption could well have been quite a bit lower than it is at present.

In addition, having kept water prices constant since 2000, it will be socially and politically difficult to increase water prices in the future.

The second challenge relates to energy. The water sector now uses a prodigious amount of energy to pump, treat, recycle, desalinate and produce NEWater. The increase in water self-sufficiency has been made possible by an increased use of energy. Even though energy prices are now lower than they were last year, this may not continue over the long term. Since Singapore lacks both water and energy sources, a public debate on the desirability of improving water security at the cost of increasing energy insecurity is required.

Third, the environmental costs of brine disposal from the increasing number of desalination plants need to be carefully analyzed. While discharges from a few plants are unlikely to be a problem, the rising number of plants could create the kind of headache that the Gulf experiences.

PUB has been an impressively competent organization. It has very successfully dealt with historical water problems. We are optimistic that it will meet the future water challenges of the city-state and its people.

Asit K. Biswas is the Distinguished Visiting Professor, Lee Kuan Yew School of Public Policy, and Cecilia Tortajada is a Senior Research Fellow in the same School. Both are co-founders of the Third World Centre for Water Management, Mexico.

This article was first published by the Diplomat on June 10, 2015.

- Singapore: Past, Present and Future by Asit K. Biswas and Cecilia Tortajada. The Diplomat, June 10, 2015.