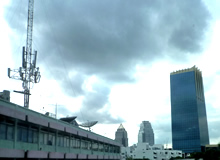 This is not unprecedented in human history. Advanced countries like the USA, UK, Germany and Japan developed first and took care of their environmental problems later. Environmental pollution was expected to be a byproduct of development during the 1950s and 1960s.

An example is the Cuyahoga River in the United States. The river first caught fire in 1868. Since then there were some 13 fires, the last being in 1969. This is because of oil, grease and other combustible materials floating in the river. It is the only river in the world that has ever been declared a “fire hazard.”

Another example is the River Thames in England. In 1858, the smell from the river was so bad that the British Parliament had to abandon its sittings. This episode is still known as “the Great Stink.”

However, as people of these developed countries became environmentally aware, they demanded a better quality of life. The problems were significantly reduced during the post-1970 period.

For World Environment Day on June 5, let us examine one of China’s environmental problems — disposal of solid wastes by “waste-to-energy” incineration plants. An undesirable byproduct of China’s affluence during the post-1990 period has been the rapid generation of solid waste because of rapid urbanization and industrialization.

According to the World Bank, in 2012 China generated 520,548 tons of solid waste per day. This accounted for nearly 14.7 percent of the world’s total. It is estimated that by 2025, the country will generate three times the 2012 amount. This means that by 2025, China will be responsible for nearly one-quarter of the global solid waste.

National statistics for 2010 indicate that 77 percent of the waste was disposed in landfills, 20 percent was incinerated, and 3 percent was recycled. Landfills are not a good solution since they take much land and are difficult to manage.

The emphasis on incineration of solid wastes in China started in the 1990s. The 12th Five Year Plan heralded the golden age of incineration and is in a sense a “Great Leap Forward.” Under the Plan, 263.6 billion yuan (US$42.3 billion) will be spent for waste management, 65 percent of which will be for treatment facilities. Most of these will be for incineration plants. At present, China is constructing nearly 100 incineration plants a year — half the world’s total.

As China’s economy has developed, it has contributed to a rapidly growing middle class which is fast becoming more educated, savvy with the use of social media, and becoming restive because of the pollution of air, water, land and food. As was observed in the West during the post-1970 period, China is now playing catch-up to the NIMBY (not in my back yard) syndrome.

This is manifested by the fact that between mid-2007 and mid-2012, there were at least a dozen protests against incineration plants by local residents.

This is because of perceived health hazards due to toxic emissions like dioxins and wastewater disposal. Expected decline in the land and house prices around the sites is also a major concern.

Hangzhou hit the global headlines on May 10 not because of its renowned oolong tea or that it is the headquarters of Alibaba, which may soon become the world’s largest ever IPO. It was because some 10,000 local farmers staged a protest against the construction of an incineration plant in Zhongtai, a suburb.

The protest achieved its objective. Shanghai Daily reported that work on the construction has stopped. City officials said, “We will invite the local people to participate, fully listen to and seek every one’s opinions...” In our view it is the right decision. However, the public participation and consultation should have been carried out before the decision to construct was taken, not after the protest.

Equally, there has to be a serious attempt to reduce the amount of waste generated by increasing public and industrial awareness of the problem. Reduction of waste generation and increasing recycling have to be major components of the solution.

This article was originally published in the Shanghai Daily, on May 29, 2014.