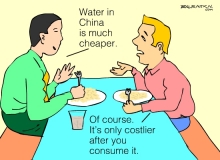 China is home to one-fifth of the world's population but has only 7 percent of its freshwater. Water is essential to human survival and social development, but it cannot be traded like other resources. Water is heavily subsidized in nearly all countries. Agriculture accounts for about 70 percent of global water use, and water for irrigation is basically free, or highly subsidized, all over the world. In many developing countries such as China, India and Brazil, electricity supplied to farmers for pumping water is also subsidized.

Since users don't pay the real cost water, it is very difficult for any country to ensure extra supply of water. So China has to depend on its own sources of water. Fortunately, China has more than enough water for the next 100 years. Unfortunately, like most other countries, it lacks efficient water management and governance practices.

China's water management has been on an unsustainable path for decades. For example, total water use in the country has increased nearly five-fold since 1949, and for the past six decades, the demand for additional free or subsidized water has been met with more supply. Serious thinking has rarely gone into determining whether additional supply is truly needed, or improving efficiency of water management through effective pricing policies, available technology and public awareness programs.

Take the current domestic and industrial water use in China. Daily per capita water consumption in many provinces is more than 200 liters (Hainan 249, Guangdong 241, Hubei 213, Jiangsu 212, and Guangxi Zhuang autonomous region 242). In Shanghai, it is 184 and in Beijing, 173. Besides, our (Third World Centre for Water Management's) estimate indicates that on average a Chinese city loses more than 30 percent of piped water through leakages and poor management practices.

In contrast, an average person in a city such as Hamburg, Germany, uses only about 105 liters of water a day, primarily because of good pricing policies. The average price of water in 25 major Chinese cities is only $0.45 per cubic meter, compared with a global average of 2.03 per cubic meter. Therefore, an average urban Chinese consumer does not feel the need to save water.

Thankfully, unlike oil and minerals, water is a renewable resource. Water can be used, treated, filtered and reused, and this cycle can continue indefinitely. It is estimated that each drop of the Colorado River water is used seven times, and, with better management practices, this rate can be more than doubled. There is absolutely no reason why the current treatment and reuse rate of water in China cannot be quadrupled within the next five to 10 years. But despite the potential of improving water use in China being very high, serious efforts to realize have not been made in the past.

Poor water quality management practices, too, are reducing water availability in China by further polluting water sources. Government figures show that in 2011, more than half of the country's largest lakes and rivers were so polluted that their water was unfit for human consumption. And in 2013, the Environmental Protection Ministry said: "In recent years, toxic and hazardous chemical pollution has caused many environmental disasters, cutting of drinking water supplies, and leading to severe health and social problems ...."

The situation in terms of industrial use of water and pollution is equally unsatisfactory. We estimate that Chinese industries use four to 10 times more water, depending on the types of products manufactured, compared with their counterparts in developed countries.

A Ministry of Environmental Protection survey shows nearly one-fifth of China's agricultural land is polluted because of continuous irrigation with inadequately treated wastewater, which is the result of poor industrial wastewater management and agricultural practices. According to the survey, conducted over a period of seven years, the three main pollutants are cadmium, nickel and arsenic and most of the affected farmlands are along the eastern coast where much of the country's heavy industries are located. A major reason for water contamination is that neither municipalities nor industries treat, or have treated, their wastewater properly and consistently.

Even though European countries, the US, Canada and Singapore have less polluted water sources, they use advanced treatment technologies such as ozonation, reverse osmosis and activated carbon to treat their water. But despite its water being significantly more polluted, China continues to use old technologies, which cannot remove many of the pollutants, to treat its water. Until the end of 2009, 98 percent of water treatment plants in China were using conventional technologies.

Not surprisingly, the economic, social and health costs of water pollution in China are now very high. The World Bank estimates that they add up to 2.1 percent of its GDP. But we believe the real costs could be twice that.

Water quantity and quality management in China is now at a crossroads. The country has the knowledge, technology, expertise and resources to solve its water quality management problems. Whether it can do so depends on many factors, including political will and social pressure.

Given the magnitude and complexity of China's water pollution problem, it basically has two options, China has no option but to take water management measures to ensure sustainable economic growth as well as better quality life for its people.

The Chinese leadership is well aware of this dilemma. As premier Li Keqiang said recently: "It is no good to be poor in a beautiful environment, nor is it any good to be well off and leave with the consequences of environmental degradation."

The cartoon was drawn by our friend: Balraj KN, Cartoonist, Copywriter and Sculptor, Bangalore, India.

There is a link to his website in the reference section below: