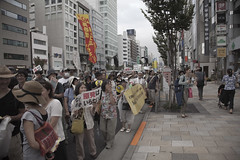 Paul Tripp, of Australia's Deakin University, has shared with us his "energy profile" of Japan.
Once dubbed the “Asian miracle” economy, Japan experienced unprecedented growth for over 2 decades, from the early 1970’s until the mid-1990’s, when the economy all but flatlined, referred to the “lost decades” (Asian Century Institute 2016). During the boom years Japan enjoyed high productivity due to generous government subsidies on construction, infrastructure, and energy projects, and strict domestic protectionism (Asian Century Institute 2016). This potent mix of economic factors led the way to Japan becoming the world’s 3rd largest economy until in the mid-1990’s when the USA and other countries demanded that Japan cease it protectionist ways, allow the Yen to float on the open market, and truly open their economy. The Yen immediately appreciated, causing import prices, and most importantly, energy resource imports, to skyrocket, paving the way to the decline in growth, the lost decades, Japan still struggles with today (Asian Century Institute 2016).

Japan faces many economic challenges that have plagued it since the beginning of the lost decades, and while some indicators have been positive in recent years, the journey back to economic prosperity will be long and difficult. The first, and arguably most urgent economic challenge Japan faces is its demographics. Japan’s total population is in decline with recent data indicating total population in 2009 of 128 million has since declined to 126.9 million by 2015, of which only about 64% are of working age (15-64) (The World Bank 2015). Rounding out this demographic triple threat, fertility rates in 2015 were only 1.5 children per woman, a slight increase over 2001 at 1.3, but still well below the replacement rate of 2.1 (Organisation for Economic Co-operation and Development 2015). Japan’s GDP per capita, once surging ever upwards has become a roller-coaster of ups and downs since the mid-1990’s, recently slipping below the OECD average (The World Bank 2015). While this gap is relatively small, the issues it presents are accentuated by social inequalities and gender inequality, ranking in the OECD Better Lifer Index at only 27/38 and 37/38 respectively for personal income metrics (OECD Better Life Index 2017).

Since the end of World War II, Japan has had very close ties to the USA, creating opportunities for trade and mutual defence. Due to its enforced pacifist constitution, Japan spends very little on defence, approximately 0.93%, compared to the OECD average of 2.2% of GDP, but since the election of Donald Trump as President of the USA, pressure has mounting to increase this percentage to the regional average (Gerts 2016). Japan's relations with some of its nearest neighbours, China, South Korea, and North Korea, remain strained due to its previous expansionist policies, historical invasions, and the Japanese military’s history of abduction and abuse of Korean women during WWII (Patrik 2017; Funabashi 2015; Cheng 2017). These relations are of specific concern as, between them and India, control of the shipping lanes through the South China Sea is maintained, and with Japan heavily reliant on oil exports from the Middle Eastern nations through these shipping lanes, could well cause significant trouble for Japans energy security (Funabashi 2015). As an active participant in world trade, once a key signatory of the now defunct Trans Pacific Partnership agreement, Japan maintains profitable trade agreements throughout the world, recently signing the Japan-Australia Economic Partnership Agreement (JAEPA), described by Australia’s Minister for Trade and Investment (Robb 2014) as Japan’s most trade liberalising agreement the nation has ever signed.

Until the earthquake in 2011 that resulted in a tsunami that critically damaged the Daiichi nuclear power plant in Fukushima, about 27% of Japan's energy consumption was nuclear, since this time, nuclear energy has all but been shut down. Since this time, Japan has replaced nuclear energy with fossil fuels, primarily oil and natural gas (LNG), almost all imported, as Japan has very little fossil fuel resources of their own (US Energy Information Administration 2017). This increase of fossil fuel energy sources has increased CO2 emissions, making Japan rank number 5 in the world in production of greenhouse gases (Country Watch 2017). Japans primary environmental issues, such as air pollution, water way acidification, and toxic emissions, arose through ever increasing demand for economic growth with little regard for its environmental impacts (Country Watch 2017). With clean-up efforts continuing at Fukushima, Japan has renewed its environmental sustainability focus through new energy conservation and environmental protection policies.

Since the earthquake and tsunami of March 2011, and subsequent shutdown of most of Japans nuclear power plants, Japan imports approximately 80% of its energy resources as it increases its reliance on fossil fuel generators to make up the gap left by the shutdown nuclear reactors (US Energy Information Administration 2017). Japan has implemented numerous environmental regulations, and is a key signatory to many international climate change agreements, such as the Kyoto accords, but none stand out as particularly stringent when compared to similar regulations from some of its global contemporaries.

Japans greatest success in sustainability has come from social policies aimed at efficient, energy-saving policies (Midori 2010; US Energy Information Administration 2017). These regulations have helped Japan become one of the world’s most efficient energy consumers, with energy demand growth the lowest in the Asia-Pacific region, and while this increased reliance on fossil fuels has increased the countries CO2 greenhouse gas emissions, the levels are still in line, or below, the OECD average (US Energy Information Administration 2017; Organisation for Economic Co-operation and Development 2014). The success of these policies, can be seen in the comparison of Greenhouse Gas Emission. Japan, despite an initial increase in emission levels immediately after the Fukushima disaster, have once again started trending downwards, as has Australia’s, while the USA is trending upwards, and remain well below USA and Australia, in tonnes per capita.

Contrasting national outlook with major trading partners, Australia and the USA, the approach could not be more different. Both the USA and Australia enjoy an abundance of natural resources, Australia, along with the USA are some of the world’s largest producers of Coal and natural gas, the USA is also the largest producer of petroleum, as such, the energy security of both nations is heavily dependent on fossil fuel consumption (Energy Information Administration 2017). A clear, national, outlook for energy security appears to be lacking, and gives way to individual state priorities and objectives (Harmsen 2017). Since the election of Donald Trump to the office of President of the United States, a known climate change sceptic, reliance on fossil fuels is set to increase (Brown 2017). While Japan appears to be, some would say by fiscal necessity, moving away from fossil fuels into renewables and nuclear, and boosting energy efficiency, both Australia and the USA seem headed in the opposite direction for energy security.

Japan's future environmental and economic sustainability of this country

Japan's energy mix outlook for 2030 are LNG 27%, Coal 26%, renewables 22-24%, nuclear 20-22% (US Energy Information Administration 2017), not only will this shift away from fossil fuel reliance have beneficial effects on their environment, it is fiscally imperative given their current government debt levels of 234% of GDP. A reduction in fossil fuel resources will help the government wind back this trade deficit, reduce CO2 and GHG emissions, and boost overall energy security and sustainability. In order to meet their energy mix goals, Japan will need to bring many of their nuclear reactors back online, but only if new, stringent, safety regulations are developed and adhered to, as their environment, nor their economy, can afford another meltdown as the one experienced in March 2011 at Fukushima (The Economist 2016, p. 36). The social policies and industrial regulations around energy efficiency and savings enacted have been an outstanding success for the Japanese, giving them the lowest energy demand growth in the Asia-Pacific region, these efficiency measures, if combined with a tightening of air quality regulations, will have great beneficial effects on environmental quality, energy reliance, and the national accounts.
Tags: japan, energy consumption.