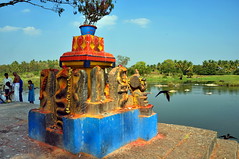 Acute political and policy failures have put India on the edge of a full-blown groundwater catastrophe, write Asit K Biswas, Cecilia Tortajada and Udisha Saklani.
India is facing a perfect storm in managing water. Centuries of mismanagement, political and institutional incompetence; indifference at central, state and municipal levels; a steadily increasing population to at least 2050 (estimated at 1.7 billion) which will require more and more water; and a rapidly mushrooming middle class demanding an increasingly protein-rich diet requiring significantly more water to produce. On top of that there is an absence of any serious and sustained attempts at central or state levels to manage water quantity and quality; a lack of implementation of existing laws and regulations; and pervasive corruption and poor adoption rates of new and cost-effective technologies. Those are only some of the reasons why water situations in all the Indian states are likely to continue to become progressively worse.

Despite this sad state of affairs, there are no real signs that politicians are waking up to the rapidly deteriorating water situation all over the country, or are willing to take hard but essential political decisions. Actions are mostly cosmetic. Policies are primarily ad-hoc, incorrect, incoherent and rarely properly implemented.

Politicians are looking for visible but mostly quick and temporary results from one election cycle to another. It does not matter which party had been in power, the results have been the steady deterioration of the country’s water situation.

India is now facing a water situation that is significantly worse than any other previous generation has ever had to face. All Indian water bodies within and near population centres are now grossly polluted with organic and hazardous pollutants. Interstate disputes over river water allocations are becoming increasingly intense and widespread. Not a single Indian city can provide clean water that can be drunk from the tap on a 24×7 basis. There are no signs that this situation is likely to improve in the near future.

Surface water conditions in the country are bad. However, the groundwater situation is even worse.

Groundwater extractions are growing in their significance and have become increasingly unsustainable over the last five decades. Consequently, in many parts of the country, groundwater levels are declining steadily. In some parts, levels are declining by more than one metre per year. A lack of proper wastewater treatment from domestic, industrial and mining sources has meant that groundwater is being progressively contaminated by known and unknown pollutants, elevating the potential health risks to humans and ecosystems.

It is, therefore, no coincidence that the highest number of protests by farmers and suicides have occurred in the Andhra Pradesh, Gujarat, Maharashtra, Karnataka and Tamil Nadu where groundwater blocks have become overstressed due to decades of over-extraction and poor management.

During the last three decades, there has been an explosive growth of private tube-wells in farms because of a lack of reliable surface irrigation. The problem is compounded by Indian law which extends exclusive rights to landowners over groundwater. These factors, plus free electricity for pumping, have contributed to an increase in groundwater use from 58 per cent in 2004 to 62 per cent in 2011. There are no indications that this rate is levelling off.

In order to develop policies for sustainable groundwater use, it is essential that reliable data on groundwater availability use and quality be systematically collected. Sadly, groundwater is not only an invisible resource, but it has also been invisible to the Indian politicians and bureaucrats in terms of taking any timely policy actions.

The monitoring of groundwater quantity, quality and use is a prime example. Despite having four separate central bodies regulating groundwater, there is no single groundwater database for the entire country. In 2016, the Standing Committee on Water Resources of the Indian Parliament finally recommended having a national groundwater database which could be updated every two years. However, when this will actually happen is anybody’s guess.

Intensive groundwater extractions will continue at least over the medium term. The current situation has already contributed to serious economic, social, political and environmental problems. India is also facing a rising number of interstate and transboundary river conflicts.

India’s failing groundwater regime is not a new policy challenge. Groundwater use in India started to accelerate with the beginning of the Green Revolution during the early 1960s. Growth in groundwater irrigation has increased exponentially since that time.

Data on groundwater availability, use and quality are patchy and mostly unreliable. The best estimate is that at present India uses 230–250 km3 of groundwater each year. This accounts for about one-quarter of the global groundwater use. More than 60 per cent of irrigated agriculture and 85 per cent of domestic water use now depends on groundwater. India now uses more groundwater than China and the United States combined.

Farmers using groundwater obtain twice the crop yields compared to surface water. This is because groundwater irrigation gives the farmers more flexibility as to when to irrigate and the amount of water they can use because they have total control as to when to pump and for how long.

This expansion in groundwater use has been mostly due to a government policy of providing free electricity to farmers, irrespective of their income levels and needs. Encouraged by external donors, who made it a condition of their loans for several agricultural development projects in the 1970s that farmers must have 24-hour free electricity, this policy did produce a short-term benefit of increasing food production. However, this ill-conceived policy has had long-term costs, with serious groundwater depletion and heavy losses suffered by the various State Electricity Boards because of the provision of free electricity to farmers.

According to official assessments by the Indian Ministry of Water Resources, in 2004 29 per cent of groundwater blocks were critical, semi-critical or overexploited. It also concluded that the situation was deteriorating rapidly. In 2014, the Central Groundwater Board noted that the number of overexploited districts increased from 3 per cent in 1995 to 15 per cent in 2011.

In 2009, NASA studies reported that the Indus Basin was the second most overstressed aquifer in the world. This basin includes the states of Punjab and Haryana, which constitute India’s granaries. This study also noted that the rate of depletion of groundwater levels in North India is about one metre every three years. This is 20 per cent higher than the earlier assessment by the Indian Water Ministry and indicates the true gravity of the situation.

Accelerating groundwater extractions also have major quality implications. In coastal aquifers, declines are adding to seawater intrusion. In addition, there are serious risks due to various types of geogenic contamination, including by fluoride and arsenic. These problems are already being witnessed in several states.

Unless urgent steps are taken to manage groundwater scientifically, there will be very serious adverse implications for India’s food, water, energy, environment and health sectors. Nearly half of India’s jobs are now in the agricultural sector. If the current trends continue, by 2030 nearly 60 per cent of Indian aquifers will be in a critical condition. This means that some 25 per cent of agriculture production will be at risk. This would aggravate India’s employment situation.

The root of the English word ‘rival’ is from the Latin world rivalis which means a person using the same river. Unless India can significantly improve its water management, states will become each other’s rivals, with a similar rivalry springing up between different types of water users. This will be a dangerous development for the world’s most populous country during the post-2025 period.

This article was first published by the Policy Forum on 10 March 2017.