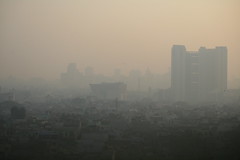 Why some Asian countries manage air pollution very well while others fall cripplingly short, by Asit K Biswas and Kris Hartley.
Few anti-pollution proposals outclass the creativity of Dutch artist Daan Roosegaarde’s scheme to convert fine airborne particulates into jewellery. The Smog Free Project, an air purification tower recently introduced in Beijing, runs largely on wind energy and produces material for rings and cufflinks. Although its scalability is debatable, this project points more broadly to the need for creative grassroots interventions in the absence of effective public policy.

While global leaders incessantly pontificate about emissions reduction targets, often at summits resembling political theatre more than substantive progress, respiratory complications related to air pollution continue to kill millions, many economically vulnerable and politically underrepresented. Data are clear about the urgency for intervention, and the content of good policy is no mystery. The greatest hurdle is political indifference.

While terrorism, political violence, pandemics and sea-level rise are formidable threats to human livelihoods, air pollution continues to have an unparalleled impact on survival. An estimated 6.5 million deaths worldwide are attributable to air pollution each year, according to the International Energy Agency.

The World Health Organization has established guidelines for air quality based on the concentration and size of particulate matter; the smaller the particulates, the deeper and more harmful their penetration into human lungs can be. For particulates less than 10 microns wide (PM10), the critical threshold is 20 micrograms per cubic metre as an annual mean and 50 mpcm as a daily mean. WHO suggests that a reduction in PM10 from 70 mpcm (a common level in developing cities) to 20 mpcm could result in a 15% decrease in pollution-related deaths.

Household air pollution, which accounts for a majority of related deaths in India, comprises the burning of solid fuels such as coal, wood, dung and crop residue; these are vital sources of power and heat in poor and developing regions. For example, crop burning in Indonesia has compromised air quality in neighbouring countries such as Singapore, causing public resentment and diplomatic tension. Ambient air pollution, which accounts for a small majority of air pollution-related deaths in China, comprises emissions from power plants and automobiles, among other sources; these activities are more common in wealthier developed regions.

A closer inspection of geographic patterns reveals that the threat is concentrated in a handful of countries. In findings presented at the 2016 annual meeting of the American Association for the Advancement of Science, 55% of the 5.5 million air pollution-related deaths in 2013 occurred in China (1.6 million) and India (1.4 million).

WHO’s recently released country statistics show that the gap between developed and developing countries is growing. In the 22 largest cities of developed East Asia (Japan, South Korea and Taiwan), the annual mean for mpcm of PM10, an average of 37, exceeds WHO standards by only a modest margin. In contrast, the average for China’s 23 largest cities (113) and 122 Indian cities (107) far exceeds standards.

Day to day statistics are cause for further concern. In late October 2016, Delhi’s PM10 readings reached a shocking 4,273 mpcm. For more hazardous PM2.5, the annual mean in the same Chinese and Indian cities was 59, far beyond the average (21) for developed East Asian cities and egregiously non-compliant with WHO standards. While Asia’s developed countries are setting the regional and global standard for how to manage air pollution, Asia’s developing countries are providing case studies in crippling policy failure.

Even paragons of environmental policy often fail to achieve performance targets; for example, measurements taken during summer 2016 found that PM2.5 in San Jose, California, exceeded that in Shanghai on 32 out of 61 days. According to the senior director of air quality and climate change for the American Lung Association in California, an estimated 7,000 Californians suffer early deaths each year due to air pollution-related complications; a 2013 MIT study found that 200,000 people across the US die each year for similar reasons.

According to the IEA, “Air quality outlook is not set in stone, but rather it is a policy choice.” There is a variety of policy-induced practices to address air pollution: clean technologies and industrial processes, cleaner power generation, ‘smart’ urbanisation emphasising density and public transport, energy-efficient buildings and optimised waste management.

Nevertheless, current policy targets may be inadequate; one study estimated that China’s faithful adherence to its own current air quality policies and commitments would fail to reduce air pollution-related deaths by 2040. The likelihood of consistent, long term adherence to existing standards is low, and regulatory enforcement at the local level continues to be lax – even in Beijing.

Now is the time for domestic constituents, environmental watchdogs and policy experts to advocate more aggressively for good-faith policy intervention. There is neither economic growth nor political stability without public health. Leaders in the world’s rapidly developing countries may learn this the hard way.

Asit K Biswas is distinguished visiting professor at the National University of Singapore. Kris Hartley is a lecturer in urban planning at Cornell University.

This article was first published by The Times of India, November 8, 2016.

- Foul odour of failure: Why some Asian countries manage air pollution very well while others fall cripplingly short. The Times of India, November 8, 2016