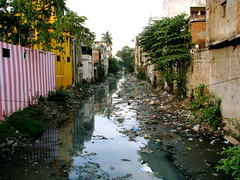 Urbanization is a key feature of Asia's development, as it was in Europe and North America in earlier times. But in Asia it is also very different, argues the Asian Development Bank (ADB).

Asia's urbanization is much more rapid. Asia's transition from having 10% of its population living in urban areas to 50% (in 2025) will take only 95 years. This compares with 210 years in the case of Latin America, 150 years in Europe, and 105 years in North America. China made this urban transition in just 61 years. Overall, from 1980 to 2010, Asia added more than one billion people to its cities, with a further billion set to become city dwellers by 2040.

Asia also leads the world for megacities, cities with populations over 10 million. Eight of the world’s ten biggest megacities are in Asia -- Tokyo, Shanghai, Jakarta, Seoul, Beijing, Guangzhou, Karachi, and Delhi (New York City and Mexico City are the only non-Asian cities in the top ten).

And despite these mind-boggling statistics, we are little more than half way through Asia’s potential urbanization process. About 46% of Asia’s population are now urban-dwellers, compared with 89% for Australia and 93% for Japan. In other words, Asia’s urbanization path still has a long way to go.

A green urbanization for Asia?

Urbanization brings many economic benefits. But unless well-managed, urbanization can result in increasing urban crime, slums and income inequality. And what’s more, urban populations can also suffer from rising pollution, and vulnerability to flooding and climate change.

A few years back, the ADB bravely made a case for "green urbanization" in Asia. And there are some reasons why urbanization can be good for the environment.

Urbanisation brings higher productivity thanks to economies of scale and agglomeration, thereby reducing the economy’s ecological footprint. Asian urban productivity is 5.5 times higher than that of rural area, according to the ADB.

As development proceeds, lower-pollution services take over from manufacturing as key driver of the economy. And compact urban-living reduces energy consumption, a major source of pollution.

Environmental-friendly infrastructure and public services are more affordable for urban governments, than in dispersed rural communities. Experience also shows that urbanization can foster innovation, including for green technologies.

And as urbanization drives economic development, emerging middle class populations will pressure governments, even in authoritarian China, to manage the environment better. Middle class families are very rightly worried about the health of their children.

Many economists believe there to be an "environmental Kuznets' curve" (the original curve by economist Simon Kuznets pertained to inequality). This means that while the early stages of economic development see a deterioration in the urban environment, over time, urbanization and development become positive forces for the environment.

When you visit cities like Singapore and Tokyo, it is easy to be convinced of an environmental Kuznets' curve operating in Asia. But most Asian countries are not at all in this situation. Urbanisation and development are creating great stresses for the environment, and vulnerabilities to climate change and natural disasters are only getting worse.

As Asia’s rural residents rush to live in cities, they buy cheap cars, take high-polluting public transport, and work in dirty factories. Traffic-related congestion costs in Asia are estimated to amount to 5% of GDP. Many Asians still cook their food and heat their habitations with small fires, the major source of air pollution. And if they have access to electricity, it comes from small-scale diesel electricity generators or coal plants.

It is not surprising that the environment of most Asian cities is simply appalling, and even life-threatening for many. Out of the world’s 3.3 million premature deaths due to air pollution, 1.4 million occur in China, followed by India with 645,000 and Pakistan with 110,000, according to the Max Planck Institute for Chemistry. By 2050, there could be 6.6 million such premature deaths every year worldwide.

Weak, incompetent, and often corrupt governments are also not responding adequately to the challenges posed by urbanization. Over 500 million Asians live in urban slums, and even more live without clean toilets and drinking water. Trash is all too often left to rot, rather than being collected.

Asia tops the world when it comes to all the indicators of polluted cities. According to the World Health Organization (WHO), some 62 Asian cities figure in the list of the world’s 100 most polluted cities by “particulate matter concentration”, with the top ten including: Delhi, Patna, Gwalior, Raipur, Ahmedabad, and Lucknow from India; Karachi, Peshawar and Rawalpindi from Pakistan; and Khoramabad from Iran.

On an average day, the residents of Delhi breathe air fouled by fine particles at a concentration of 153µg/m3. This has damaged the lung function of half the city’s 4.4 million children so severely that they will never fully recover. Delhi’s score is close to three times the Beijing mean and 15 times the WHO guideline of 10µg/m3. Beijing, with its notorious air quality, only ranks 76th on the world list. Some 67% of Asian cities fail to meet the European Union's air quality standard for particulate matter, compared to 11% of non-Asian cities.

In Linfen, China, the air is constantly soiled with burning coal. Also in China, a lot of lead ends up in the soil and water in Tianying, and ultimately in the bloodstream of children, because of a lack of regulation of lead production in China. In Sukinda, India, studies show that the drinking water includes more than double the international standard of Hexavalent Chromium. And in Vapi, India, groundwater has been found to contain mercury levels almost 100 times higher than the WHO’s recommended amount.

Coastal cities are more productive due to their access to shipping routes. But their location is not only an asset. Many Asian cities are also at risk of coastal, as well as, inland flooding -- such as the 2011 floods in Bangkok. And it is the urban poor who face the greatest risk from natural disasters because they tend to live in areas which are most prone to disasters, and have the least assets for protecting themselves.

Indeed, Asia accounts for some 15 of the world’s top 20 cities ranked in terms of population exposed to coastal flooding in 2010/2070, including the effects of both climate change and socio-economic change, according to Christian Aid. The Asian cities affected are: Kolkata, Mumbai, Dhaka, Guangzhou, Ho Chi Minh City, Shanghai, Bangkok, Yangoon, Halphong, Tianjin, Khulna, Ningbo, Chittagong, Tokyo and Jakarta.

Policies for green urbanization in Asia

There are many things that Asian governments could do to turn around their urban environmental disaster.

Since energy consumption is one of the biggest sources of pollution, it is critical to improve energy efficiency by eliminating energy subsidies, taxing pollution using the polluter-pays principle, promoting the use of renewable energy and smart electricity grids. And environmental regulations and standards should be elaborated and above all enforced.

Slums conditions can be improved by providing basic services, and granting land titles to slum dwellers. And rather than passively letting urbanization happen, governments should create satellite cities linked by high-speed public transport, and incorporate environmental priorities into city planning.

Given the exposure of Asian cities to the adverse effects of climate change, they also have a stake in working towards solutions. This means implementing carbon taxes and/or cap-and-trade schemes.

Already, three of the world's top 5 carbon-emitting nations are in Asia, viz, China, India and Japan. And looking ahead, Asian cities are poised to contribute more than half the rise in global greenhouse gas emissions over the next 20 years, if no action is taken.

Urban infrastructure will also need to be able to cope with Asia's increasingly frequent natural disasters, notably by building in safe areas, investing in drainage infrastructure and climate forecasting technology, and improving housing affordability for the poor.

With Asia's continuing rapid development, its environmental challenges and vulnerability to climate change and natural disasters will only get worse, in the absence of decisive action. Indeed, global manufacturing hubs in Southeast Asia are likely to experience significant falls in productivity over the next 30 years due to rising temperatures and extreme heat stress impacting labor forces, according to the risk analytics company, Verisk Maplecroft.

But as a late-comer to urbanization, Asia has much to learn from other countries' past mistakes. With political will and leadership, it could solve its environmental problems and chart a sustainable future. Most regrettably, however, except for a few cases, Asia’s urban environmental crisis seems to be getting only worse, not better.

- Key Indicators for Asia and the Pacific 2012. Special chapter—Green Urbanization in Asia.

- Statistical Yearbook for Asia and the Pacific 2014. UNESCAP