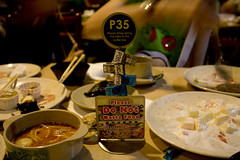 Cutting the astonishing quantities of food that is wasted could have profound repercussions, argue Asit K. Biswas, Matthew J. Kastner and Cecilia Tortajada.
Imagine if a third of all your time, money and effort achieved nothing. This is the reality for farmers around the world, because one-third of all the food produced is wasted.

The Food and Agriculture Organization (FAO) projects food production will have to increase 60 percent over 2007 levels to feed a growing, wealthier future population. As food production requires arable land, needs agro-chemicals, emits greenhouse gases (GHGs), and consumes and pollutes ever-scarcer water supplies, meeting these projected targets will strain our environment and may prove well-nigh impossible. Since a third of the food produced is wasted, utilizing this lost resource can reduce production requirements significantly below projected levels.

Today is World Food Day, and it is a good time to address policies, technologies, institutions and consumer behavior that can reduce food waste.

Producing food requires many inputs. First, land that is fertile and cultivable. Clearing forests to develop arable land in Asia could reduce biodiversity, threaten endangered species, and can alter water cycles seriously. Fertilizers and pesticides are needed to have good yields.

Both emit GHGs in their production. When used improperly, they contribute to water pollution. Globally nearly 70 percent of water is used for agriculture. In countries like India, it is nearly 90 percent. As more water is abstracted for agriculture, less is available for all other uses. Finally, energy is needed to harvest, process, store, and distribute food grown to the consumers, all resulting in more GHG emissions to the environment.

By reducing food wastage, all of these inputs could be reduced. This would have positive repercussions for climate change, water scarcity, and pollution and habitat loss.

To appreciate the magnitude of the impacts of food waste on the environment, the FAO estimates that in terms of GHG emissions, they exceed that of total emissions from India and Brazil combined. The water lost to food wastage is 3.6 times all water consumed in the U.S.

When most people think of food waste, it is often associated with overconsumption in the West. However, “Industrialized Asia” (Japan, South Korea, and China) is responsible for 28 percent of the total food wasted in the world, while South and Southeast Asia is responsible for 21 percent. North America and Oceania combined waste only 8 percent.

At every stage of the food supply chain and for all categories of food, there is wastage. To reduce food wastage for the lowest hanging fruit it is necessary to know at which points in supply chain food is being wasted and by how much. Moreover, comparing this information with other regions, especially developed countries, suggests where the technological barriers lie. With this knowledge, governments can formulate policies and invest in technology to reduce wastage most effectively.

North America and Oceania are capable of halving waste at storage, handling and distribution stages relative to Industrialized Asia. This indicates the institutions and technologies exist for other regions to utilize and reduce waste at these stages. Yet they are not being used.

One example of a poor institution that fosters food waste is China’s decentralized agricultural system. The food safety laws provide no guidance or requirements on proper post-harvest storage containers used at farm households, where more than 50 percent of the country’s grain is stored.

China’s new 2015 Food Safety Law, effective from October 1, is stringent with producer and distributor licensing and inspections by officials. If this law can be properly enforced, it could reduce food waste.

Rising Waste at the Consumption Stage

With rising affluence food waste at the consumption stage is increasing in Industrialized Asia, especially in China. Much of the food waste at this stage occurs in restaurants, not in the home.

Although there are some laws requiring restaurants to recycle food, lack of enforcement leads to an underutilization of food recycling plants. Moreover, cultural barriers like losing face (by running out of food) and over-ordering as a sign of respect and generosity to guests, leads to unnecessary food wastage.

Food wastage at consumer levels is especially challenging. It is easier to add technology, or change public policy relevant to pre-consumer food wastage, than it is to change the way people behave. People must feel connected to the food they eat and appreciate the larger social and environmental consequences of wasting food.

Well-coordinated campaigns to encourage a reduction in food waste may provide some benefits but are unlikely to coerce many people to change their food habits. The best way to achieve this may be through education, targeting especially the young. Not only will they be more conscious of wasting food in their adult lives, they will also question their parents’ bad practices.

Education in schools on the overall implications of food waste is an effective way to create a generation of conscious citizens that will waste less and less food.

In South and Southeast Asia, the story is different. One-third of losses occur during the handling and storage stages of the supply chain, second only to Sub-Saharan Africa. This represents a huge opportunity to reduce losses through effective policies coupled with investments in technology. Requiring and providing incentives, such as targeted subsidies to farmers to invest in proper storage facilities, will reduce wastage further and increase farm incomes. Additionally, such high wastage figures illustrate the need for additional proper and efficient supply chain systems near urban areas where much of the food is consumed.

Distribution losses at 16 percent in this region are greater than in other parts of the world. Since this region has a hot and humid climate, it is essential to consider additional cold storage facilities and the potential for processing increasingly more fruits and vegetables.

Consumption losses in South and Southeast Asia are second lowest at 8 percent, an excellent figure that exemplifies the wastefulness of developed regions like North America. But although this volume of waste is low, South and Southeast Asia are developing quickly and becoming more affluent. As countries become richer, their food wastage at the consumer level tends to increase. Policies need to be proactive if this is to be avoided.
In Asia, home to the majority of the world’s poor, reductions in food waste will reduce hunger and enhance food security.

Private sector investments to reduce food waste in Asia is an untapped market with very significant potential not only to increase agricultural yields but also to ensure that efficient supply chains develop to transport food from farmers to the consumers. A few multinational companies like Nestlé have made remarkable contributions, first to increasing farm yields and then to ensuring an efficient supply chain that dramatically reduces, and in a few instances, completely eliminates wastage. Such approaches by enlightened private sector companies not only improve the standard of living of poor farmers, they also enhance food security.

There is no silver bullet to reduce food waste globally. Solutions vary regionally and some are harder to implement than others.

The development and implementation of proper government policies, private sector investments, and improved education to change consumer behavior are necessary. These will not be easy, but have to be done to ensure the world can become increasingly food secure.

Asit K. Biswas is the Distinguished Visiting Professor at the Lee Kuan Yew School of Public Policy, National University of Singapore. Matthew J. Kastner is a graduate student at the same University. Cecilia Tortajada is Senior Research Fellow, Institute of Water Policy, at the above School.

This article was first published by the Diplomat on October 16, 2015.