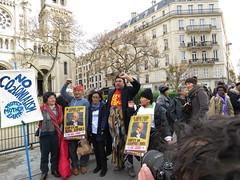 Managing the politics of climate change

How countries navigate the politics of climate change will determine their future - and this won't be easy, argue Asit K Biswas and Cecilia Tortajada.
The governments of more than 190 countries are meeting in Paris between Nov 30 and Dec 11, under the aegis of the United Nations (UN), for a climate conference. The objective is to come up with a legally and universal agreement to control greenhouse gas emissions so that the increase in global temperature can be contained within 2 deg C above the pre-industrial age levels. Such an agreement has eluded the world for more than 20 years.

The Paris mega-conference is expected to attract some 50,000 participants, including 25,000 officials delegates from governments, inter-governmental organisations, UN agencies, non-government organisations (NGOs) and representatives of civil society.

Globally, driven by continued population growth, economic development and quest for steadily higher standards of living, anthropogenic emissions are now higher than ever during human history. The annual emission growth rates up to the year 2000 were 1.3 per cent; since then, this rate has gone up to 2.2 per cent. Unless the growth of such emissions can be significantly curtailed, the world will face increasing climate-change risks.

Business as usual is not an option since it will not only contribute to a warming globe but also will result in sea-level increases and intra-annual and inter-annual rainfalls in different parts of the world. These developments will affect all types of issues, including food, energy, water and land use.

Economic and social developments will be significantly affected in all countries by climate change through a variety of pathways, only some of which are known at present and can be predicted within some degrees of certainty. There will also be many other impacts which are currently unexpected and uncertain and thus are not being considered for any planning or policy-making purposes in any serious and consistent manner.

Climate change will thus make an impact on all aspects of development in terms of magnitude, their onset as well as their time and spatial distributions. The extent of the impact on people, economies and ecosystems will depend on a multitude of factors, and how each of them will be managed as well as the interactions between them. Among these factors are the rates, magnitudes and distribution of the changes, political and institutional capacities to anticipate them and then manage their complex interactions. The willingness and preparedness of the governments, public sector, individuals, NGOs and civil society organisations to ameliorate and/or adapt to them are also factors, as are advances in science, technology and planning practices, rates of adoption of the new scientific, technological and management breakthroughs, the social, economic and political perceptions of the problems and the social and political willingness to manage the changes.

There will be winners and losers in all sectors of society in all countries, but at the present state of knowledge, it is not possible to predict the extent of the impact with any degree of certainty. Unless appropriate global actions can be taken in Paris, all countries, rich and poor, big and small, will be affected by these changes.

Singapore may be a small country with a small carbon footprint, but it will not be immune to the effects of global climate change. The republic is a low-lying island where much of the land lies within 15m above the mean sea level. Some 30 per cent of its land area is within 5m of mean sea level. Thus, an immediate threat due to climate change for Singapore is sea-level rise.

The city state has been planning for years to adapt to the impacts of climate change. For example, in order to reduce its vulnerability from wave erosion of coastal areas, nearly 80 per cent of its coasts already have hard walls or stone embankments. The rest are natural areas such as beaches or mangroves.

In 1991, Singapore made a policy decision that all newly reclaimed land must be built at least 1.25m above the highest ever recorded tidal level.

As the threat of climate change increased and scientific evidence indicated that the sea level rise may be higher than anticipated earlier, in 2011, Singapore decided to increase the level of newly reclaimed land at least by one additional metre.

Singapore is an exception because of its history of good long-term planning. There are, however, many other areas needing urgent action. For example, Singapore still imports half its water from Johor. The reservoir level in Johor is now at a historic low. In future, serious and prolonged droughts could affect Johor and Singapore concurrently and may even last for months.

The current multi-year unprecedented drought in California, and the millennial drought in Australia are wake-up calls for Singapore. Strategies as to how best to manage water during the coming decades are needed, mostly as potential future droughts may last for a considerable period.

More than a generation of Singaporeans have grown-up since the last water rationing. Thanks to excellent water management by PUB, one of the world's most efficient water agencies, Singaporeans now take water for granted. Water tariffs have remained the same since 2000, and current water bills are down to about 0.36 per cent of average household income - about half of what it was in 2000.

The average Singaporean now uses 150 litres per person per day. This is about 50 per cent more than the most efficient European city. New and innovative policy instruments are urgently needed to further reduce both domestic and industrial water consumption to ensure its long-term water security.

In our view, globally the politics of policy-making will require a quantum jump in significantly improving planning and decision-making processes. The politics behind human security, climate change and sustainable development are likely to be one of the greatest challenges of the 21st Century. How individual countries will navigate these challenges will determine their future. Paris has the potential to go a considerable way towards ensuring a climate-secure world. However, whether this potential can be realised through a fractured and contentious process is another story.

Asit K Biswas is a Distinguished Visiting Professor at Lee Kuan Yew School of Public Policy. Cecilia Tortajada is Senior Research Fellow in the Institute of Water Policy in the same school. The article is based on their latest book Water Security, Climate Change and Sustainable Development, published this week by Springer, Berlin, as a contribution to the discussion to the Paris Conference.

This article was first published by the Business Times on December 1, 2015.