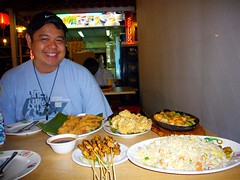 Asit K Biswas, Matthew J Kastner and Cecilia Tortajada share their thoughts on the downside to Singapore's food availability, that is, food wastage.
SINGAPORE is a country where one can find food 24/7, comprising Chinese, Indian, Malay, Indonesian, Western and everything in between. It has all different types of cuisines reflecting the cosmopolitan characteristics of the city and its people. Moreover, this has come about even though it imports 90 per cent of its food. Only one per cent of its land is used for agriculture. The well-thought-through government policies have made Singapore the second most food-secure country in the world at affordable prices.

These positive aspects of Singapore's food availability also have a major negative aspect. A huge amount of food is wasted, and only 13 per cent of the food waste is recycled. On World Food Day, Oct 16, Singapore should become more conscious of the importance of food, and how environmental footprints of food distribution and use can be reduced by cutting food waste.

The detachment of average Singaporeans from the food supply chain contributes to their unawareness of the negative environmental and societal damages food waste causes. Nearly a third of all food produced in the world is wasted. According to United Nations (UN) estimates, food production will have to increase 60 per cent over 2007 levels to feed a growing, wealthier future population by 2050. Meeting these projected targets will strain the environment further and may prove well-nigh impossible.

Producing additional food will require new cultivable land. In Asia, there is very little additional new land that could be converted to agricultural production. Deforestation is thus taking place to make new land available for agriculture. This is reducing biodiversity, threatening endangered species, altering water balances, and ruining air quality, as the current haze crisis demonstrates. Fertilisers and pesticides are needed to ensure good crop yields. Both emit greenhouse gases (GHG) during their production. When used inefficiently, they contribute to water pollution.

Globally nearly 70 per cent of water use is for agriculture. As more water is abstracted for agriculture, less is available for all other uses. Finally, energy is needed to harvest, process, store, and distribute food grown to the consumers, resulting in more GHG emissions and contributing to additional adverse environmental impact. By reducing food waste, impact on land use, climate change, water resources, air quality, and biodiversity can be diminished, and additional food will be available for human consumption.

The UN's Food and Agriculture Organisation (FAO) estimates that in terms of GHG, global food wastes contribute to more emissions than those by India and Brazil combined. The water lost to food waste is 3.6 times all water consumed in the United States. The amount of land needed to produce the amount of food wasted globally exceeds the combined total area of Canada and India.

Most people associate food waste with overconsumption in the West. North America and Europe do waste a lot of food. However, East, South and South-east Asia make up about 40 per cent of total global food waste. These wastes contribute to 54 per cent of GHG emissions, 57 per cent of water extracted from the environment, and a third of the land cultivated to grow food.

In Singapore, 788,600 tonnes of food waste were generated in 2014. This means each Singaporean discarded some 145 kg of food last year. More troubling is that only 13 per cent of that food waste was recycled - the third lowest recycling rate for any waste type in Singapore. The food waste problem is two-fold: people waste too much and too little of that waste is recycled.

Recycling of food waste needs to be increased. A 13 per cent recycling rate is not only poor but also shows that this could be a low hanging fruit for immediate policy intervention. The National Environment Agency (NEA) has called for tenders on a pilot project at two hawker centres to segregate food wastes, ideally to reduce waste at each place by 90 per cent. This is a step in the right direction; if the pilot projects are successful, recycling should become mandatory at all hawker centres.

To increase recycling beyond this, supermarkets and wet markets should also be equipped to recycle food. Aesthetically displeasing looking food, primarily produce, is often thrown away at these places. Implementing recycling at these places where food is already separated is easy to accomplish and necessitates only minor changes in logistics and infrastructure.

Singapore, the "Garden City", has a lot to be proud of in many regards on the environment. It has excellent water management, many trees and parks and a good mass transit system, reducing the need for cars. Unfortunately, Singapore also over-consumes and under-recycles, especially when it comes to food. Although the city-state has an overall recycling rate of 60 per cent, which at first sight appears admirable, this is primarily because industry, and not individuals, practises extensive recycling. This highly publicised figure may even be detrimental to individuals' sense of responsibility to recycle. Individual recycling of many waste products is still low for an advanced country. This needs to be acknowledged and rectified.

The crux of meaningful change in behaviour needs to start with the young. Education in schools on the implications of food waste would be an effective way to create a generation of conscious citizens who will waste less food. Moreover, environmental education will also foster more recycling of the food that is wasted, combating the problem from both sides.

Economically, most people can afford wasting food in Singapore. However, just because life is often plush here does not preclude or detach people from the global environmental damage food waste causes. This is one area where both government and society as a whole needs to consider collective and concerted actions.

Prof Biswas is a distinguished visiting professor at the Lee Kuan Yew School of Public Policy, National University of Singapore; Mr Kastner is a graduate student at NUS while Dr Tortajada is senior research fellow, Institute of Water Policy, at the above school

This article published in The Business Times, October 16, 2015