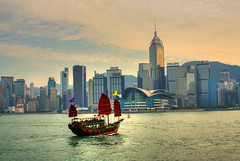 Hong Kong's economy has shown remarkable resiliency over the past year, but still faces many risks, writes John West.
Just one year ago, in the midst of the “Umbrella Protest Movement,” it seemed that Hong Kong’s position as the most business-friendly place in Asia might be threatened. But, for the moment at least, the “Pearl of the Orient” seems still on track.

Since China began its opening to the world economy in 1978, Hong Kong has been the most important gateway to the world’s second largest economy. This role was enhanced by the “one country, two systems” policy, which has governed Hong Kong since its sovereignty reverted to China in 1997.

Hong Kong has many great assets for Western businesses operating there. It has the world’s best infrastructure, according to the World Economic Forum. Hong Kong has been ranked as the world's freest economy by the Heritage Foundation for 20 consecutive years, and it is Asia’s leading financial centre (and third globally after London and New York), according to the Z/Yen Group. Hong Kong also has a low and simple tax regime, sound rule of law, freedom of the press, and a very well educated population.

It’s not surprising that Hong Kong has been one of the world’s leading destinations for foreign direct investment (FDI), especially in service sectors which now dominate the economy, such as finance, logistics and professional services, information technology, telecommunications, and tourism. Hong Kong’s total stock of inward FDI now amounts to more than five times that of its GDP.

One year ago, the Umbrella Protest Movement took over the streets of Hong Kong, protesting for the free and open selection of candidates for the election of the territory’s Chief Executive in 2017. Beijing insists that it should choose the candidates.

In the midst of these protests, it seemed that the territory’s political and social stability might be threatened. Many local and Western businesses were disturbed by the movement. The government’s handling of the unrest was often clumsy and ineffective, and the “hand of Beijing” was clearly operating behind the scenes. Ultimately, the Umbrella Protest Movement fizzled out, although in June, opposition legislators from the pro-democracy camp defeated a bill supporting Beijing proposals for the 2017 Chief Executive elections.

Although the Umbrella protests clearly affected some business activities, the Hong Kong economy has demonstrated great resilience. Inward FDI was $103 billion in 2014, an increase of 39% over the previous year, putting the territory second only to China for global FDI in that year. The economy grew by 2.5% in 2014, a solid rate for a mature economy, and is on track for similar growth in 2015. Going forward, however, the Hong Kong economy faces risks from the slowing of the Chinese and global economies, the prospective hike in US interest rates, and the HK$ exchange rate which is pegged to the strong US$.

There is still potential for further social unrest in Hong Kong even though the protesters are no longer in the streets. The protests were not only inspired by a desire for democracy. They also reflected a broader feeling of popular discontent concerning the cost of living and housing, poverty and inequality, air pollution, and the growing presence of mainland tourists, migrants and business. And while the government announced some alleviating measures in its recent budget, Hong Kong remains a deeply polarized society.

This is not a new issue. Way back in 2009, then Chinese Premier Wen Jiabao raised the issue of Hong Kong's "deep contradictions" when he pushed then Chief Executive Donald Tsang to do better in maintaining "Hong Kong's harmony and stability." And with Beijing now tightening controls on the mainland in order to maintain social and political stability, its long arm will no doubt stretch more deeply into Hong Kong in the event of further unrest. In short, we could see a progressive erosion of the commitment of Beijing to the “one country, two systems” policy.

Hong Kong’s broader role as an Asian business capital may also suffer at the hands of Singapore. The Lion City’s government is truly independent, and through the pressure of elections, it is becoming more responsive to its citizens. It is also a more livable city than Hong Kong, as reflected in its superior ranking in Monocle's Quality of Life Survey. And above all, Singapore is also very well connected to the fast-growing Indian and ASEAN markets.

It was originally published by The Cipher Brief.