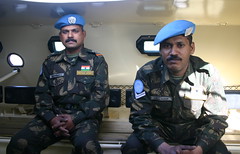 To effectively implement OROP (one-rank-one-pension), India's Ministry of Defense needs to depart from its current practices, argue Mukul Asher and Azad Singh Bali.
The decision by the current government to implement One-Rank-One-Pension (OROP) for military personnel is a welcome move as it reduces the long-standing unfairness in pension arrangements between uniformed military personnel and employees of the Union Government.

Unlike the Indian Administrative Service and Indian Foreign Service most military personnel do not make it to the highest pay grade called ‘apex scale’ during their time in service. Changes in pension benefits (caused by increases in salaries) are not passed on to retirees. This gives rise to significant disparities in the pension benefit, for the same rank, across cohorts of retirees. The cumulative effect of this is that military personnel have significantly lower pension benefits than those employed in the civil service. Indeed, India is one of the exceptions where civil service personnel have more generous pension arrangements than the military.

While many design details are not yet fully clear, the OROP decision can only be effectively implemented and its fiscal implications managed if complementary reforms in three broad areas are sustained: Improving Professionalism In Administering OROP, Sustaining Economic Growth, and Creating Fiscal Space.

Improving professionalism (i.e. the competence and quality of services provided) with which current military pensions programs are administered is an urgent necessity. Four specific initiatives in this regard are outlined.

First, the Ministry of Defence (MoD) must construct a demographic profile of all personnel including their dependents. This is to estimate current and future costs of the pension scheme, and make make arrangements to meet this expenditure. The quality of the debate on OROP has been severely constrained by the lack of available data on basic pension design-related features: e.g. the age-specific composition of beneficiaries and eligible dependents over the next several decades; estimates on mortality and morbidity rates in retirees, and how they vary across cohorts, geographical regions, or occupational groups.

Estimates available in the public domain suggest that most military personnel (about 80 per cent) retire between the ages of 35-40, 19 per cent retire between the ages of 54-60, and less than one per cent retire above the age of 60. Increasing longevity trends (the average life expectancy at age 60 in India is 17 years in 2014) underscore the importance of such data in shaping the design of pension schemes, and subsequent reforms to ensure that pension promises remain credible and sustainable.

Second, the Government must periodically conduct an actuarial evaluation of the current value of the liabilities and the arrangements made to meet them. Such actuarial evaluations of statutory expenditure are essential for sound management decisions on how such spending is to be sustained and to project cash flow needs. Reforms in managing public accounts, i.e. a shift from cash-accounting to accrual-accounting, where feasible for e.g. in public enterprises, are useful as they underscore the continual need to match long-term liabilities and assets. To facilitate this, there is significant merit in all government agencies maintaining a registry of their assets. The Government does not need to make this registry publicly available if national interest concerns are compromised. However, constructing such a registry is imperative for the government to assess various options to meet contingent liabilities.

Third, Governance Boards that oversee military pension arrangements must include independent professionals that are well versed in actuarial sciences, economics, finance and information management systems. The mandate of the Board would be to ensure that the Ministry of Defence has access to core areas of expertise that are vital for a modern pension program. As civil service personnel are routinely rotated between government agencies, access to such expertise is imperative.

Fourth, given the complexity in the design of OROP and the periodic revisions that retirees will face, the MoD must strengthen its communication strategies. Annual Reports, Web Portals, Wikis that contain necessary information will be needed. Such tools place competitive pressures to provide quality services across all government agencies.

The credibility of any Defined-Benefit pension scheme, including the OROP, is based on sustaining high rates of economic growth. Specific reforms that contribute to improved economic growth in India are therefore essential. This will require complementary and structural reforms to increase the flexibility in labour markets, lower the cost of doing business, attract investments and create jobs. This however requires a systemic approach and coordination across government agencies. There are two initiatives that MoD can consider to sustain economic growth.

First, investments in human capital and equipping military personnel with skill-sets that can be used in employment post retirement merit consideration. As most personnel retire before the age of 40, and can continue to contribute to the economy for many years, labour market reforms that encourage retired personnel to be absorbed across the economy must be prioritised. It is often the case that many military personnel contribute to security, administrative and organizational management post retirement. Creating avenues to utilise the vast skill-set and experience of personnel in other areas in the economy are also important.

Second, many Ministries including the MoD manage large public enterprises. More productive use of resources under these enterprises is another avenue to contribute to economic growth. For instance, many government agencies manage large parcels of land that are not being used efficiently. Once a national registry of assets becomes available, concrete efforts to monetise unproductive assets or generate revenue from these assets (i.e. land-use rights or leases) must be prioritised.

Simply put, fiscal space refers to the ability of an economy to finance expenditure without impinging its other priorities. Creating fiscal space to finance OROP is fundamental to ensuring the sustainability and credibility of military pension arrangements. In this context, fiscal space can be created by either or a combination of a) reducing expenditure needs of the MoD; b) increasing revenue or share of national income devoted to the MoD; c) sustained increases in national income.

Lowering administrative costs of pension programs by relying on information technology or saving costs through efficient procurement practices are examples of lowering expenditure requirements. Similarly, monetising unproductive assets or using land-use rights to generate income is an example of creating fiscal space. The recently completed coal and spectrum auctions will, over time, generate revenue equivalent to 2.5 per cent of 2013 GDP. Similar efforts by all government agencies, including the MoD, to implement reforms that create fiscal space must be emphasized.

The cost of the pension program for civil servants (employed in central and state governments) prior to the National Pension System (NPS) was about 1.9 per cent of GDP. Such disproportionately high spending on less than 4 per cent of the labour force precipitated sweeping reforms to pension arrangements for civil servants recruited after 2004. Civil servants employed after 2004 are under the NPS, and have to co-contribute towards their pension. Their pension benefit is based on their accumulated contributions.

The co-contributory design of the NPS may not be effective for military personnel as most retire before the age of 40. The NPS however provides a framework for managing pension arrangements that MoD could customise. For example, over time, the MoD could make annual transfers to sinking funds to meet pension expenditure for future retirees. The proceeds of these funds could be managed by NPS or under the NPS architecture. Such arrangements would strengthen the fiscal sustainability, and improve the professionalism of military pension arrangements in India.

The Ministry must undertake complementary and concomitant reform in the three broad areas discussed here if public support for OROP and the credibility of military pension arrangements is to be sustained. This would require MoD to depart from current practices and its business-as-usual mind-set.

Mukul Asher is Councillor and advisor to the Faculty at the Takshashila Institution. He is a Professorial Fellow at the Lee Kuan Yew School of Public Policy at the National University of Singapore. Azad Singh Bali is a Research Fellow at the School of Management and Governance, Murdoch University.