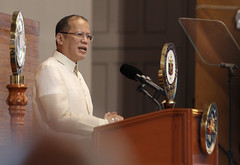 Achieving Resilient and Inclusive Growth in the Asia-Pacific was top of the agenda at the recent 23rd PECC General Meeting in Manila.
The Asia-Pacific is undergoing a structural transformation with uncertainty prevailing in key markets, the region must find new engines of growth by harnessing business opportunities enabled by digital revolution, rise of middle class, increased social mobility and global value chains.

Realizing the potential of these new trends requires the participation of all sectors of the community.

“The Pacific Economic Cooperation Council (PECC) is an excellent example of a belief I always have held: The challenges of a country, or even of the world, are not for a mere few to solve. Each one of us must do his part. Standing here today, in front of an audience composed of representatives from business, the academe, governance, and other sectors, I see that belief realized."

"Since 1980, the PECC has contributed so much, not only in crafting policy, but also in shaping a more stable and more prosperous Asia Pacific. Indeed: By working together, we will find it much easier to solve our collective challenges. Foremost among these is how to achieve balanced, sustained, and inclusive growth.”

Underscoring that inclusive growth fosters stability, he added, “The Filipino people are front and center in our governance agenda. […] Economic progress is inseparable from the progress of the people.”

Speaking in reference to challenges in promoting inclusive growth, Senator Paolo Benigno Aquino IV said that stronger linkages should be fostered for MSMEs (Micro, Small and Medium Enterprises) on the ground and create level-playing field as they play key role in enhancing inclusive growth.

“We must help these industries in terms of financing, training, equipping them with tools, and providing logistics support in taking goods out of the country,” he said. Small and micro businesses, when helped by simplified procedures on compliance and cost reduction in cross-border business transactions, can compete internationally through global value chains."

"As recognized by the region’s ministers at the APEC ministerial meeting focusing on structural reforms held in Cebu earlier this week, APEC policy makers must continue to work towards removing financial and bureaucratic barriers and reduce costs to facilitate cross-border business transactions. While greater efforts must be made to make education and technical training more accessible and affordable to people, it was also noted that it takes time to see return on investment in human capital, requiring patience. Economically empowering women and the vulnerable population were also mentioned as priorities alongside the need to boost the international competitiveness of the MSMEs.

Summarizing the outcome of the APEC Structural Reform ministerial meeting held earlier this week in Cebu, Hon. Arsenio Balisacan, Secretary of Socioeconomic Planning of the Philippines stressed that structural reforms are necessary for “an economy to function more efficiently and provide basis for sustained long-term growth. It helps economies to be more resilient, stable and productive.”

When APEC was established in 1993, “the concern was the inequality between economies. Now the more urgent issue is the inequality in the distribution of wealth within economies,” said Ambassador Antonio Basilio, Chair of PPECC (Philippine national committee for PECC).

Compared to 1999 when the Philippines last hosted the PECC General Meeting, the global landscape has seen much change since and the policy challenges have become much more cross-cutting and complex. While the ‘New Normal’ and ‘rebalancing’ phase following the 2008 global financial crisis manifest in different ways in different economies, “concepts like ‘middle income trap,’ ‘Dutch disease,’ and ‘liquidity trap’ which previously existed only in economic textbooks are now everyday realities,” said Ambassador Antonio Basilio.

One characteristic of the new normal is the increased frequency and severity of natural disasters. The Asia-Pacific which straddles the ring of fire is particularly vulnerable, however policy interventions including preparing communities for disasters and providing insurance for lost livelihoods can help people affected to recover more quickly. Regional cooperation enables policy makers to understand various solutions others in similar situations have been able to implement.

Ambassador Roberto R. Romulo, former international chair of PECC and founding chair of the APEC Business Advisory Council (ABAC) noted that the world had changed since he had chaired the organization and urged the new generation of regional thought-leaders to address social concerns critical to ensuring that all segments of society benefit from the ongoing integration process. The meeting noted the growing role that social enterprises can play in uplifting people’s livelihoods.

“PECC is tripartite in nature, a platform for leaders from government, research and business sectors to contribute to discussions on regional policy issues. The 23rd PECC General Meeting held here in Manila serves as a useful opportunity for us to provide substantive input to the many important agenda set by the Philippines as host of APEC 2015,” said Ambassador Don Campbell, Co-chair of PECC.

About 50 undergraduate and graduate students were selected by different member committees of PECC and participated in a next generation program in addition to attending the 23rd PECC GM. Three finalists of the PECC essay competition were acknowledged by the Standing Committee of PECC on the occasion.

The Pacific Economic Cooperation Council (PECC) is a non-profit international organization committed to the promotion of cooperation and dialogue in the Asia Pacific. Founded in 1980, PECC is a tripartite network of 26 member committees comprising individuals and institutions dedicated to this shared mission.