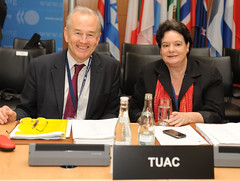 Global Slowdown and Refugee Crisis Requires Extraordinary Action From G20, according to the international trade union movement.
A fragile global economy overshadows the G20 Labour and Finance Ministers meeting in Ankara under the Turkish Presidency of the G20 as growth targets fall dangerously behind and world trade suffered its greatest fall since 2009 in the first half of 2015.

Trade unions under the banner of the Labour 20 addressing the Minsters outlined the need for a coordinated action to invest in jobs, support minimum living wages and collective bargaining, set targets for youth employment and put responsible investment in line with these policy needs.

New IMF figures show growth targets set by the G20 in Brisbane are lagging with a 3 % gap opening up between the target and today’s global economic outlook.

“Growth has to rise by more than double to meet the demand set by the G20 last year. The G20 faces a problem of credibility - we urge Labour Ministers to issue a warning to Finance Ministers, – we need target measures that can create jobs – through responsible investment in infrastructure and tilt measures to raise purchasing power and wages as we reached a tipping point on income inequality,” said John Evans, General Secretary Trade Union Advisory Council to the OECD.

The threat of income security is growing – as 55 per cent of people from nine countries representing half the world’s GDP describing their finances as stagnating or going backwards in the ITUC Frontlines poll.

For only the second time in the history of the G20, Labour and Finance Ministers are meeting together in Ankara, which should act as a catalyst for coherent policy action. The L20 recommendations include:

· Raising investment in jobs and wages. L20 growth modelling shows that expansion of public infrastructure investment by 1% of GDP across the G20 countries could create up to 3.8% more growth over a five year period compared to current policies;
· Expanding women’s participation in the labour market and investment in child care and the care economy to meet the G20’s “25 by 25 target”;
· A new and ambitious target for youth employment and youth guarantees as youth unemployment rates on average a third higher than in 2007 with the exception of Germany. The share of young people not in education employment or training (NEETS) is close to 20% on average in industrialised countries and higher in emerging economies. There are 150 million low skilled NEETS in G20 economies alone;
· People fleeing from conflict should have a guarantee of a right to work and social protection.

“The world is facing the world’s worst refugee crisis since WWII and the silence from leaders is deafening. Citizens of the world are ahead of their leaders as they open their homes to refugees. The global refugee crisis is an economic crisis and G20 leaders must take co-ordinate action to ensure the right to work and social protection for refugees,” said Sharan Burrow.

The 2015 ITUC Frontlines poll of producer economies, Indonesia, Philippines and Turkey, found:
- half of all workers say their job has become more insecure in past 12 months;
- 58 per cent expect someone in their family will lose their job in the next 12 months; and
- 63 per cent say they are stressed about their job and wage security.

“The G20 has the chance to set the world of work on a different trajectory – workers are looking for extraordinary recommendations as we meet in extraordinary times. The lives and livelihoods of working people, their families and their communities depend on the decisions of labour and finance ministers. Excuses for failed policies to deliver growth must not dominate discussions”, said John Evans.